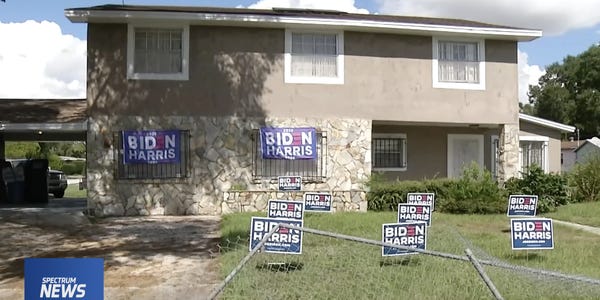 A man in Florida has been accused of stealing a bulldozer and destroying residential yards to remove Biden-Harris campaign signs.

Police say Blight stole the bulldozer from a construction site, and drove it through Haines City, ramming through a residential fence and taking out a city-owned speed limit sign while digging up signs displayed to support Democratic presidential nominee Joe Biden's election campaign.

"Blight told police that he had been drinking whiskey all day and did not remember most of the day," Mike Ferguson, public information officer for the Haines City Police, told NBC News. "He said that he couldn't help but hit the Joe Biden signs and acknowledged to taking down a fence in the process. Blight said he did not know how to operate the equipment."

Haines City Police Chief Jim Elensky told NBC News that no one was injured in the incident, but said Blight put people's lives in danger.

"It's absurd that a grown man could think he had the right to destroy someone else's property based on a difference in political opinion. The fact that he was driving this heavy equipment, that he did not know how to operate, down busy roads could have been disastrous. We're thankful that no one was hurt in this matter," he said.

"To come into our community and destroy property — it speaks to the dog whistles that Donald Trump has been putting out his whole campaign. Stand back and stand by and we have guys in bulldozers doing this. What does the president have to say about that?" he told Bay News 9, referencing Trump's comment at the first presidential debate in which he told the far-right group the Proud Boys to "stand back and stand by."

The incident is the latest in a string of incidents involving vandalized campaign signs.

Signs supporting both President Donald Trump and Biden have been targeted by vandals in Wisconsin and Minnesota, while hundreds of "Republicans for Biden" signs were stolen from lawns in Arizona this year.

Meanwhile, a city employee in Michigan cut his fingers on razor blades put on the bottom of a Trump sign he was tasked to move, while a man in Massachusetts had a Biden-Harris sign made of hay bales lit on fire earlier this month.