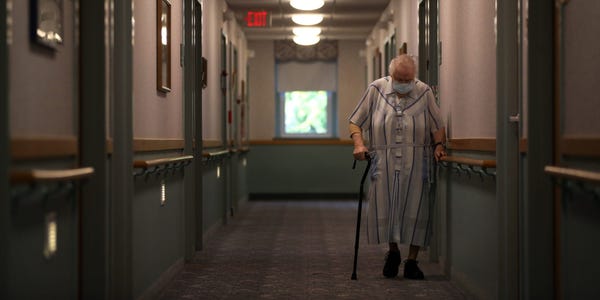 Ten residents at a nursing home in Norton, Kansas, have died from COVID-19 after all 62 residents at the facility tested positive for the disease, the county's health department announced.

According to a report from CBS News, the Norton County health department on Monday confirmed that all 62 residents residing at the Andbe Home in Norton had tested positive for the disease caused by the novel coronavirus.

Staff at the facility have also tested positive for the disease, according to the report, although the extent of the outbreak among staff members was not disclosed.

According to local officials, one person is currently hospitalized while the remaining 51 who are infected are being treated at the facility. Officials didn't specify whether any or some of the 51 residents still in the facility were presently experiencing any symptoms of COVID-19, CBS News reported.

The Norton County health department did not immediately return Insider's request for comment on Tuesday.

As CBS News noted, officials in Norton County last week had also reported an outbreak — 100 cases in a two-week period — at a local state prison. Norton County has seen one of the largest proportional increases of COVID-19 cases in Kansas over the past two weeks, according to the report.

According to data analyzed by Johns Hopkins University, there have been at least 71,557 confirmed COVID-19 infections in the state that have led to at least 870 deaths. Over the past week, more than 19% of tests administered in Kansas have returned a positive result, an increase from the week prior.

Throughout the pandemic, nursing homes have been a hotspot for COVID-19 infections as facilities have struggled to stem the spread among their residents, which often include individuals most susceptible to severe cases of COVID-19.

On Monday, the American Health Care Association and National Center for Assisted Living warned in a joint report that weekly nursing home cases rose in late September for the first time in nearly two months after new cases "dropped significantly" in August and during the beginning of September.

According to the report, spread in nursing homes can be linked to an increased spread within a community where a facility is located. On Monday, global cases of the novel coronavirus reached 40 million, doubling since cases reached 20 million during the second week of August.