Irish animation studio Cartoon Saloon may not be able to match the impact or consistency of Japan’s Studio Ghibli (who can?), but the Kilkenny-based outfit has gradually emerged as one of the world’s last and most valuable bulwarks against the crude and craven soullessness that has defined the post-“Shrek” era of mainstream animated movies. Rooted in Celtic mythology and drawn to look like a moving stained glass window, 2009’s Oscar-nominated “The Secret of Kells” stood apart from its computer-generated 3D contemporaries for its warmth and its beauty. While the likes of “Bolt” and “Kung Fu Panda” offered all the magic of a trip to the mall, Cartoon Saloon’s breakout almost seemed holy by comparison.

If subsequent efforts “Song of the Sea” and “The Breadwinner” were even prettier but less enthralling, the studio’s potential only grew stronger as it doubled down on a steadfast commitment to stories rich in cultural history (as opposed to, say, “what if ‘American Idol,’ but with animals?”). And the lushly imaginative 2D animation that brought those stories to life was rich in a cultural history of its own.

With “Wolfwalkers” — the final installment of the studio’s informal trilogy of films about Irish folklore — Cartoon Saloon has realized its true potential at last. Far and away the best animated film of the year so far (one worthy of such hosannas no matter how limited the competition has been), this heartfelt tale of love and loss is the most visually enchanting feature its studio has made thus far, as well as the most poignant.

Set in the same county of Kilkenny where Cartoon Saloon would set up shop almost 400 years later, this 17th century saga winds the clock back to 1650, when English general Oliver Cromwell completed the main thrust of the Parliamentary invasion of Ireland that he launched in a violent effort to “tame” the locals and annihilate the Catholic Church. Voiced by a holier-than-thou Simon McBurney with such loathsome relish that you can practically smell the colonization reeking off the screen, Cromwell has walled himself inside a heavily fortified Irish hamlet when the story begins.

He may insist that his soldiers and the townsfolk they’ve subjugated refer to him as “lord protector,” but the stockades alone make it clear that he isn’t there to keep people safe.Cromwell motivates with fear and follows through with murder, and even some of the Englishmen who’ve been forced to tag along on his campaign of terror are only doing so to keep their families from harm.

That’s especially true of the well-meaning widower Bill Goodfellowe (Sean Bean, delivering a Boromir-worthy degree of agonized sweetness), a hunter tasked with killing the wolves who live in the woods of Kilkenny. Bill doesn’t seem all that passionate about liquifying the lupine population that have lived in the area for God knows how long — even if they travel in scary, gnashing packs that are closer in spirit to the sacred wildlife of “Princess Mononoke” than the talking creatures found in most Disney cartoons — but any resistance poses a direct risk to his spirited young daughter Robyn (a plucky and expressive Honor Kneafsey), a tow-headed tomboy who so closely resembles Saoirse Ronan that the “Little Women” star might deserve some royalties. Bill’s entire purpose in life is to fulfill the promise he made to his late wife and keep their daughter from harm, but there’s only so much a dad can do to keep a curious kid away from an enchanted forest, and it isn’t long before Robyn develops an unusual connection to the very wolves that Bill has been tasked with wiping out.

Well, maybe it’s a bit longer than you might expect. “Wolfwalkers” is briskly paced from start to finish (perhaps even too hectic as it dashes through a pivotal second act), but the film doesn’t arrive at its magical conceit until around the halfway point. First, Robyn has to get lost in the woods and strike up a friendship with the feral, flame-haired child she meets within the dense maze. Her name is Mebh MacTire (Eva Whittaker), and she’s one of the last surviving Wolfwalkers: Mythic shapeshifters who appear human when they’re awake, assume wolf-form when they’re asleep, and will continue to serve as a necessary life line between civilization and nature until someone like Cromwell burns that bridge down once and for all. And as Robyn later discovers as part of a twist that elegantly pulls the movie together and cinches it around the waist (a stark contrast to how “Brave” got tripped up by a similar turn), Mebh’s powers are contagious.

Will Collins’ fable-like script might follow an uncommonly roundabout path to its final destination, but it’s hard to imagine that anyone will complain about “Wolfwalkers” taking the scenic route. Not when there’s this much to see along the way. Co-directed by Cartoon Saloon co-founder Tomm Moore and recently promoted art director Ross Stewart, every frame of this movie is a feast for the eyes in a way that makes the studio’s (gorgeous) previous work feel like glorified sketches of a fuller vision to come. 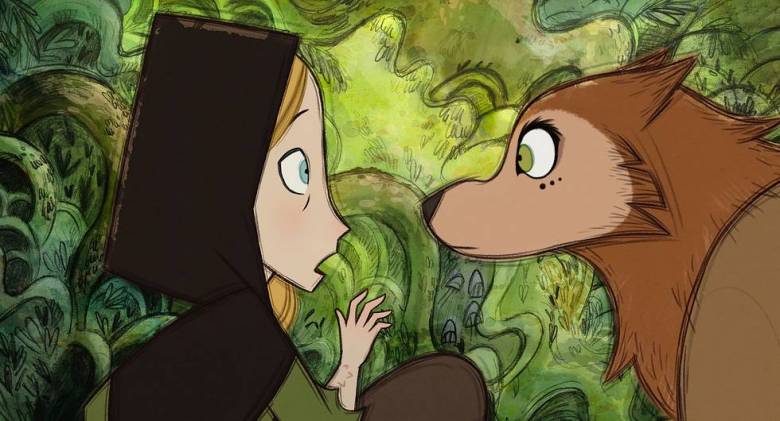 It’s not just that the entire film seems like a lushly animated storybook brought to life — its autumnal palette creating a yellow and green ombré of infinite possibility that allows Robyn’s story to grow between the cracks of history and folklore — or that you can feel a lingering human touch in all of its characters. It’s not even that similar care extends to the lupine characters too, though we can’t overstate the transformative effect that all has on Robyn herself, a familiar heroine who radiates with the precocious self-possession of someone who doesn’t realize that she’s an archetype, and wouldn’t accept it if she did.

It’s also that every frame is dense with the kind of detail that makes them all more transportive, and every detail is arranged in a way that makes the story they’re telling feel like a natural extension of its design and vice-versa. The town where Robyn lives is puritanically rigid and straight; a veritable prison that flattens into a cold iron box whenever it’s used as a backdrop, but also reveals a number of memorable chambers over the course of the movie (the colorless scullery is a standout). Mebh’s forest, by contrast, is a verdant kingdom of curved lines that lead to unexpected places and stretch full of secrets.

The animation isn’t just pretty, but also smart and active and even synesthetic in how it visualizes scent when Robyn turns into a wolf (wolfvision assumes an awesome, trippy black light aesthetic that could set kids on a path towards Pink Floyd fandom if their parents aren’t careful). A clever use of split-screen allows Cromwell’s threat to cut into the forest with hegemonic force, while one particularly ominous scene is framed with an ever-thickening border of black paint that threatens to blot out Mehb’s tribe as if they were never there in the first place. Small moments radiate such ache and agency throughout; a quick beat in which Robyn casually brushes Mehb’s thick mane of red hair adds bounce to a scene that other movies would surrender to its exposition.

But the film’s animation is only worth celebrating because of how it serves a moving story that reflects the nature of fear against our fear of nature, and leverages a potentially staid father-daughter saga into a film that weaponizes the wonder of the unknown against the evils of colonialism without talking down to the older kid audience at which it’s aimed (“what cannot be tamed must be destroyed” Cromwell barks at one point in a tale that takes great pleasure in neutering those words). The relationship between Will and Robyn may not boast a Shakespearian complexity, but “Wolfwalkers” is powerfully attuned to the protective bond that connects parents with their children, and how easy it can be to exploit that bond through fear. the dynamic between Mehb and her mother is best left unspoiled, but it’s drawn with an emotional fullness that reminded me of Frida Kahlo as much as any Celtic influences.

And even when Mehb tips over from cute to cloying, Robyn’s path strays into Disney princess territory, or the movie’s plot is overburdened by the rules of its magic — some of which pay off, and others which feel like they’re being rewritten on the fly — such ordinary missteps only focus our attention on how “Wolfwalkers” forges its own trail without stepping over the stories that came before it. Here is an animated film that finds new beauty in ancient traditions; a film that fights back against the temptation to surrender what little magic this world still has left, and fulfills Cartoon Saloon’s promise along the way.

“Wolfwalkers” premiered at the 2020 Toronto International Film Festival. It will receive a theatrical run from GKids later this year ahead of a streaming release on Apple TV+.