Now that critics’ laurels and box office results are in, the race for the top honor is clearer. But there’s still room for an outside contender to slip in. 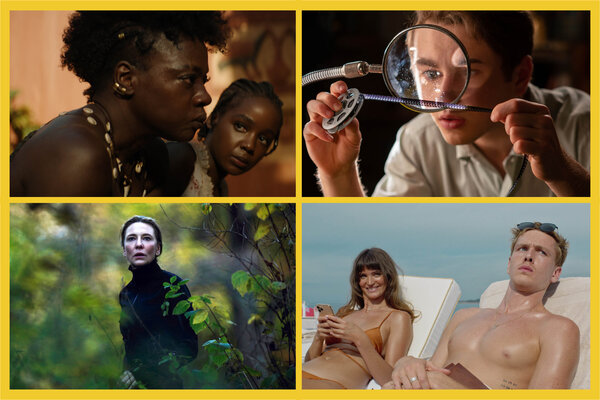 Earlier this week, I got a text from a harried colleague. “I’m not ready for Oscar season,” she wrote.

I blinked for a second before responding. Ready? This season has been going for months!

Of course, I took her point: January ramps things up considerably, since we’re about to get televised awards shows (the Golden Globes on Tuesday followed by the Critics Choice Awards the following Sunday), nominations from the acting, directing and producing guilds, and then the all-important Oscar nominations, which will be announced Jan. 24.

But we can already make an educated guess about the titles we’ll hear that day, since your Projectionist has spent the last few months weighing valuable factors like voter buzz, box office battles, laurels from critics groups, below-the-line Oscar shortlists, and influential citations like the Gothams and the American Film Institute Awards. With all that in mind, I’ve arrived at a list of 10 movies that I think currently have the greatest shot at making the best picture lineup.

Still, this is an unusual year when even the strongest movies come with significant debits, which means there’s still room for big-budget entertainments (like “Babylon,” “Nope,” “Glass Onion: A Knives Out Mystery” and “Black Panther: Wakanda Forever”), foreign-language films (including “RRR,” “Decision to Leave” and “All Quiet on the Western Front”), and indie films with strong performances (like “The Whale,” “Till,” “She Said” and “Aftersun”) to pull through. At this time last year, “CODA” looked like a middle-of-the-road contender, but a few consequential weeks later, it won enough hearts to clinch the best picture Oscar.

So consider these 10 films to merely be the starting lineup, ranked in descending order according to their certainty.

Steven Spielberg Gets Personal in ‘The Fabelmans’

The director’s latest movie, starring Michelle Williams, focuses on Sammy Fabelman, a budding filmmaker who is a lot like Spielberg himself.

‘Everything Everywhere All at Once’

Though we may think of Steven Spielberg as an Oscar staple, it’s been more than two decades since he won his last statuette, for “Saving Private Ryan” (1998). If voters consider the most successful director of all time to be overdue for another little gold man, they might think it fitting to reward him for “The Fabelmans,” the most personal project he’s ever made. This semi-autobiographical family drama was hobbled by headlines about its meager box office take, but it’s hardly the only prestige drama to struggle in theaters this year. And once the nominations are sorted, the film should fare very well on the preferential ballot for best picture, which favors consensus crowd-pleasers.

‘The Banshees of Inisherin’

Could nearly half of the 20 acting nominations be sewn up by just two movies? If “Everything Everywhere” overperforms, Yeoh, Quan, and supporting actresses Stephanie Hsu and Jamie Lee Curtis could all be nominated. Ditto Martin McDonagh’s “The Banshees of Inisherin,” which I think has an even better shot at earning nominations for all four of its principal actors: leading man Colin Farrell and his supporting co-stars Brendan Gleeson, Barry Keoghan and Kerry Condon. (Sadly, Jenny the donkey was not eligible last time I checked.) And though McDonagh failed to make it into the best director lineup for his last film, “Three Billboards Outside Ebbing, Missouri,” the stunningly photographed vistas of “Inisherin” ought to put him over the top this time.

Don’t be fooled by the recent best picture wins for simple-pleasure dramedies like “CODA” and “Green Book”: There is still a significant bloc of highbrow voters within the academy, and I suspect “Tár” will serve as their standard-bearer. Todd Field’s ruthlessly contemporary drama about a disgraced conductor has already entranced critics: The New York Film Critics Circle and Los Angeles Film Critics Association both awarded Cate Blanchett’s lead performance and voted “Tár” the best film of the year (though the West Coast group split the difference on the latter, claiming a tie between “Tár” and “Everything Everywhere”). Field made the best picture lineup back in 2002 for his first film, “In the Bedroom,” and voters will be pleased to see that their early bet on him has more than paid off.

‘Avatar: The Way of Water’

James Cameron’s first “Avatar” was presumed to be the runner-up in 2010’s best picture race, which ultimately crowned his ex-wife Kathryn Bigelow’s military drama “The Hurt Locker.” Can “The Way of Water” succeed where the first film failed? I don’t think it’s got much of a chance at actually winning best picture, since Cameron has often said that the franchise is mapped out over five movies, and voters will probably wait until the far-off denouement to decide the ultimate worth of the series, as they did with the “Lord of the Rings” trilogy. Still, a long list of nominations is all but certain, since the movie is both a blockbuster triumph and a dazzling auteurist work that only Cameron could have pulled off.

It’s been 21 years since director Baz Luhrmann scored an Oscar breakthrough with the musical “Moulin Rouge” — which was nominated for eight Oscars and won two — and I expect he’ll be welcomed back in a big way for this glittery biopic of the iconic singer, played by surefire best actor nominee Austin Butler. One of the year’s only adult dramas to succeed in theaters, “Elvis” plays as though “Bohemian Rhapsody” were executed with actual panache, and Luhrmann’s maximalist aesthetic could even push him into the best director lineup, since that branch goes gaga for technical audacity.

If a well-reviewed action sequel becomes the biggest movie of the year and helps bolster struggling theaters, shouldn’t that be enough to cram it into the best picture race? Well, that argument didn’t get “Spider-Man: No Way Home” into last year’s lineup, but domestic box office champ “Top Gun: Maverick” is already off to a better start, picking up best film nominations from the Golden Globes and Critics Choice Awards that eluded Marvel’s web-slinger. But is this Tom Cruise star vehicle actually about something, or is it just a high-flying entertainment? Oscar voters tend to turn their nose up at action sequels — the only one nominated for best picture in the last 15 years was George Miller’s astonishing “Mad Max: Fury Road” — and the next phase of this awards campaign will have to convince them that there’s more to “Top Gun: Maverick” than meets the eye.

After “Parasite” won the Palme d’Or at the Cannes Film Festival nearly four years ago, the upstart film studio Neon successfully leveraged the movie’s international appeal and turned it into an awards-season darling. Can the studio pull off the same feat for Ruben Ostlund’s social satire “Triangle of Sadness,” which also took the Palme and similarly mines class warfare for big laughs and shocking set pieces? It helps that this cruise-ship comedy has a secret weapon in supporting-actress contender Dolly de Leon, who plays a maid-turned-despot: At a time when most contenders are still wary of ascribing too much weight to the controversial Golden Globes, the Filipina actress has drawn headlines for discussing how much the Globe nomination means to her, and many Oscar voters will be eager to extend her awards-season moment.

After a big fall-festival launch, Sarah Polley’s well-reviewed Mennonite drama may have waited a little too long to come out in theaters: It was swallowed in limited release over the Christmas weekend, and will have a rough go expanding into new locations until the Oscar nominations are announced. Still, Polley is a respected actress-turned-director, the ensemble is filled with awards-friendly ringers like Claire Foy, Jessie Buckley and Frances McDormand, and the film’s bracing conversations about gender and sexual assault make a strong case for its relevance.

Gina Prince-Bythewood’s well-mounted action epic about female warriors in 19th-century Africa has an Oscar-winning star in Viola Davis and a lot of handsome tech elements, though I’m concerned that it didn’t manage to make the Oscar shortlists for its superlative costume design and hair and makeup. (At least Terence Blanchard’s thundering score made the cut in its category.) Next week’s Producers Guild nominations could foretell the film’s ultimate fate, since that group likes to recognize rousing theatrical successes and “The Woman King,” which earned a worldwide gross nearly double its $50 million budget, will almost certainly show up there if it’s got the mettle to impress awards voters.