State Farm has been coming in hot lately with their commercials. Around the 2021 Super Bowl, the insurance company boasted pretty much every big name in football. There was Aaron Rogers and Patrick Mahomes, plus actor Paul Rudd and… Drake. The State Farm commercial was such a hit that people pledged unyielding loyalty to State Farm. Obviously, bringing in the star power leads to effective advertising. Who knew?

Now there’s another new face to State Farm: Sabrina Ionescu. Sabrina appeared in the new State Farm commercial alongside NBA All-Star Chris Paul and this gives us the first clue as to who she is: a basketball player. 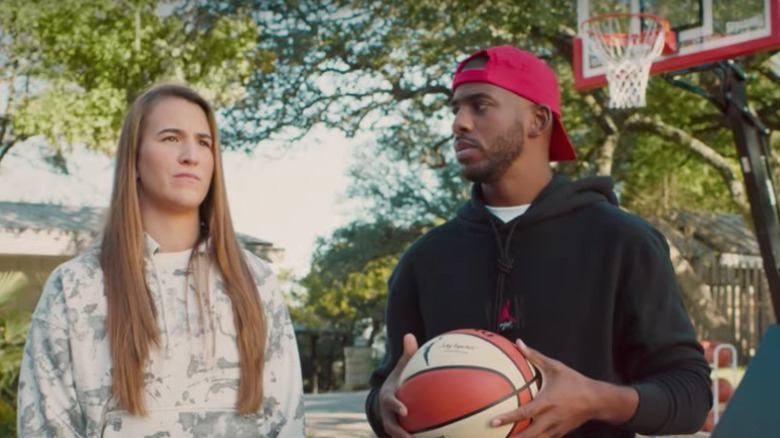 Sabrina Ionescu and Chris Paul are talking basketball on an outdoor court when Jake from State Farm shows up in the new commercial. When Jake arrives, Sabrina asks Chris: “Is this one of your State Farm commercials?” Then there’s this funny scene where Sabrina and Chris awkwardly read scripts for a new commercial.

Sabrina is a WNBA star who hails from Walnut Creek, California. She clocks in at an impressive 5’11” and, according to Go Ducks, was “only the second player in NCAA history (female or male) with 2,000+ points and 1,000+ assists.”

Sabrina was the ESPN Cover Story in March 2020 and shared: “I started to play basketball at the age of 3, though I was just throwing the ball around. I gained a lot of experience playing on my brothers’ 10-foot hoop.” As the outlet explained, the coronavirus pandemic put the NCAA on hold. However, it wasn’t an entirely lost year for Sabrina; In 2020, she was named the Naismith and AP Player of the Year. Now she’s in the State Farm commercials, so get ready to see her everywhere!