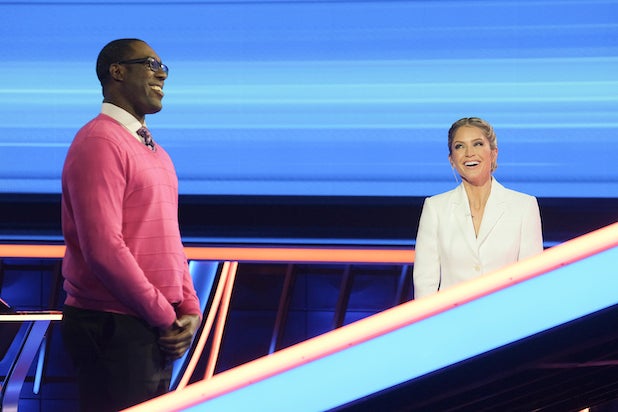 THE CHASE – “I’m Used to Men Chasing Me”– Brad Rutter returns to the hot seat as three new hopefuls take to the stage and compete against one of “Jeopardy!”’s greatest players of all time in the season finale of ABC’s “The Chase.” Hosted by “The View”’s Sara Haines and starring “JEOPARDY! The Greatest of All Time”’s James Holzhauer, Ken Jennings and Brad Rutter as the Chasers, the episode airs THURSDAY, MARCH 4 (10:00-11:00 p.m. EST), on ABC. (ABC/Ron Batzdorff)SARA HAINES

The Writers Guilds of America (WGA) have put writers on strike at ABC game show “The Chase.” The WGA and ITV America failed to come to terms after a week-plus of talks.

TheWrap first reported those talks to be active. Evidently, they did not come to a satisfactory conclusion.

“We have alerted Writers Guild members that ITV America is refusing to honor the choice of writers at ‘The Chase’ to be represented by the union and to receive pension and health benefits, residuals, and the other basic provisions of our industry wide MBA,” Lowell Peterson, executive director of the Writers Guild of America, East, said in a statement on Wednesday. “Guild members will stand united in not crossing the picket line at ‘The Chase.’”

The WGA says it informed ITV America a strike would begin at 9 a.m. ET today. And so it did.

WGA East and West have put what they call Working Rule 8 in effect at “The Chase.” Basically that means that no Writers Guild member is permitted to write on the program. Any writer who does would be considered crossing the picket line.

A spokesperson for ITV did not immediately respond to TheWrap’s request for comment on this story. Nor did one for ABC.