Daryl made a new friend this week 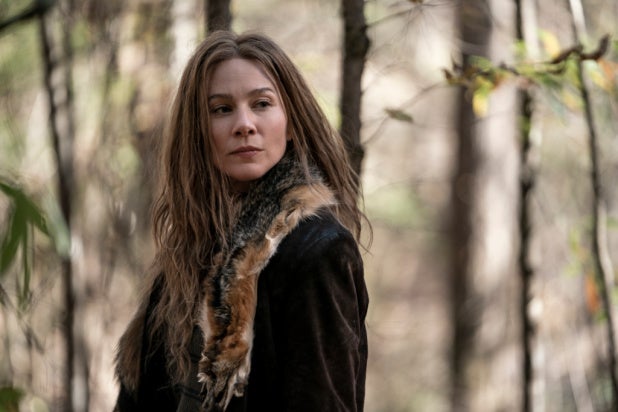 (Spoilers ahead for “Find Me,” the episode of “The Walking Dead” which debuted March 4 on AMC+, and on March 7 on cable)

It’s always very interesting when we learn about stuff that went down during the six-year time skip we got on “The Walking Dead” after Rick blew up that bridge. It hasn’t happened often, but those few examples have given us some big character moments.

And in “Find Me,” the second of six bonus episodes AMC has added to season 10 of “The Walking Dead,” we got another one. This time it comes thanks to the introduction of Leah (Lynn Collins), a woman that Daryl (Norman Reedus) met in the woods while he scoured the watershed for signs of Rick.

Leah is a lot like Daryl. They’re both loners with trust issues. They’ve got trauma they’ve never really been able to move past. And they’re both comfortable hanging out in the woods.  If Daryl is the sexy mountain man of “The Walking Dead,” then Leah feels like his sexy mountain lady counterpart.

Except we know from the start that this pairing will be temporary, because Leah has not been on “The Walking Dead” before. And at the end of this episode we learn why: three months after Daryl started shacking up with Leah, they got in a fight. And then Leah disappeared.

The fight was over Daryl’s obsession with finding Rick. Leah wanted him to give it up. It was years after Rick’s disappearance by that point — if he was gonna find anything, he would have by then. But he insisted on taking a multi-day expedition even so.

Leah was angry. She wanted him to give up the pointless search so he could actually live his life with her. But Daryl, being Daryl, has never been one to give up. So he left. And when he got back, Leah was gone, and he found signs of a struggle in their shack.

This episode also featured a frame story. Daryl and Carol (Melissa McBride) visiting the shack in the present and talking about what happened with Leah. At the end, they have their own fight, and they part on bad terms.

We know, of course, that Carol and Daryl will patch things up because AMC has already announced a “Walking Dead” spinoff about those characters. What we don’t know is if we’ll ever see Leah again. But given that Leah didn’t die in this episode, it seems like a good bet we’ll see her again at some point.

But maybe not on “The Walking Dead,” which will end after season 11. In my mind, Leah’s appearance in this episode is setting up that Carol and Daryl spinoff show. It’s tough to imagine what other purpose this character would serve here.

Remember, this episode was produced after AMC laid down its plans to end the main show and spin Carol and Daryl off. We have to assume that each of these six bonus episodes for season 10 were added purposefully as part of that greater plan for the future of the franchise as we approach the end of the flagship series. There has to be some long term relevance with this episode beyond just this new rift in Daryl and Carol’s relationship.

And also Lynn Collins, the actress who plays Leah, is somebody who typically doesn’t show up as a one-off character on a TV show. She’s the sort of actor that “The Walking Dead” loves to employ: not a superstar, but definitely somebody you’ve seen doing solid work in various places for a long time. She’s the sort of actor you’d expect to be a new regular, not just show up for a brief guest appearance one time.

Whatever the case may be, if we hear from her again it won’t be for a while since AMC still has the jumbo-sized season 11  of “The Walking Dead” to produce. The Carol and Daryl show will come sometime after that — it’s currently slated for 2023.