After a decade on the shelf, this action comedy is streaming for the first time. But while the action is dated, the comedy is antique. 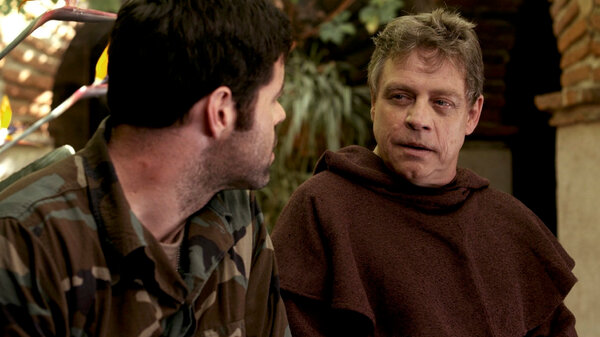 In 2013, “Virtually Heroes,” a crass, juvenile action comedy about a video game character (Robert Baker) who becomes bored of his heroic obligations, premiered at the Sundance Film Festival.

And then nothing happened for a decade. Its director, G.J. Echternkamp, has blamed the film’s disappearance on the mulish whims of the famously thrifty producer Roger Corman, who “was not happy with the money” offered by prospective distributors at the time and only recently relented, grudgingly, to allowing its release.

The film’s entire comic sensibility is epitomized by the closing credits, where an actress’s onscreen role is given as “Dead Broad” and almost a dozen others are credited as “Sexy Hippie.”

Between its old-hat story, flagrantly distasteful humor and lousy visual effects, “Virtually Heroes” feels as if it’s been sitting on a shelf for a lot longer than 10 years. It probably should have remained there.