This Romanian comedy takes an unpromising premise and turns it into a humble and humorous journey. 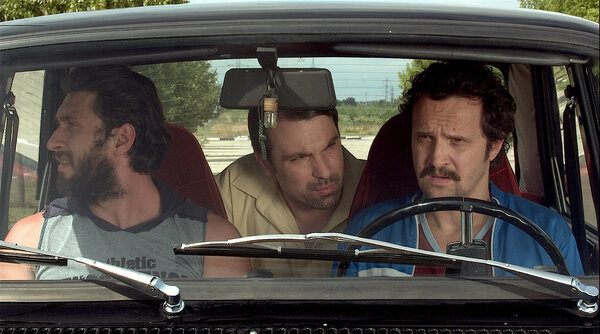 Six million euros could change most people’s lives in significant ways. The down-on-his-luck Romanian mechanic Dinel (Dorian Boguta) could use the money to win his wife back from Italy, where he believes she is having an affair with her boss. With the encouragement of his gambling bud Sile (Dragos Bucur) and a small loan from his conspiracy theorist friend Pompiliu (Alexandru Papadopol), Dinel buys two lottery tickets. He plays the winning numbers and the three decide to split the proceeds.

In the breezy “Two Lottery Tickets,” written and directed by Paul Negoescu (“A Month in Thailand”), victories are quickly deflated, allowing for amusing tangents into buddy, stoner and road trip comedy. Dinel soon realizes that the tickets were in his recently stolen bum bag. He and his friends go to the police station and stumble through a theft report, a cheeky commentary on the corruption and incompetence of the cops. (Negoescu ridicules law enforcement again later, in one of the film’s best scenes.) The friends then decide to take things into their own hands, by knocking on the doors of every resident in the building where Dinel was robbed, hoping for some answers about the mysterious muggers.

The film comes to life when the three friends start interrogating the colorful characters at the apartment complex, including fortune tellers, sex workers and a group of stoners — all ripe for hilarious vignettes driven by misunderstanding. Negoescu has adapted a short story by Ion Luca Caragiale from 1901, and the lottery ticket concept is not necessarily novel, but he gives the film fresh zest with droll observations and pitifully endearing characters — all while poking meta fun at the austere Romanian New Wave movement he works within, and works to dismantle.

Two Lottery Tickets
Not rated. In Romanian, with subtitles. In theaters and on virtual cinemas. Please consult the guidelines outlined by the Centers for Disease Control and Prevention before watching movies inside theaters.