This Morning viewers were left raging after Home Secretary Priti Patel was interviewed by Ruth Langsford and Eamonn Holmes about a new campaign she has launched to help domestic abuse charities and victims during the coronavirus lockdown. When Langsford outlined the most recent statistics of how many women had been tragically killed at the hands of their abuser, Patel’s response didn’t not impress those watching at home and they branded her “cold” and “heartless”.

A few days ago, Patel launched the #YouAreNotAlone campaign to help victims of domestic abuse after a national helpline reported a 120 percent increase in people seeking help during the lockdown, the Guardian reported.

Today, during her interview on the popular ITV magazine show, Langsford asked her whether or not the campaign and the £2million pledge should’ve happened sooner.

“It’s taken some time to get to announce the campaign and get the money out. And according to Counting Dead Women campaign, they say at least ten women and children have been killed by men they knew since this lockdown started. Is this perhaps too late?” Langsford probed.

Patel replied frankly: “Well not at all. 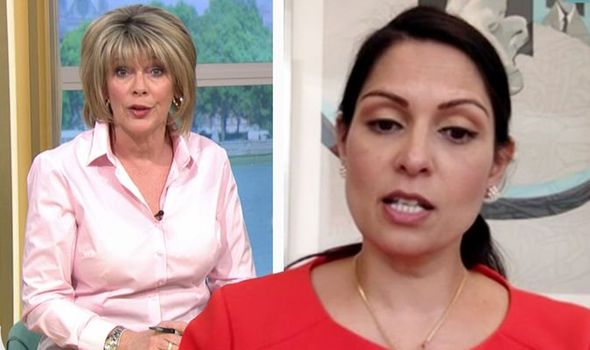 “And I do want to emphasise as well Ruth, this money, I speak to organisations every single day and I’ve spent a lot of time in recent weeks as well pressing this in government and directly with the organisations – the domestic abuse commissioner, the victim commissioner and the frontline charities themselves.

“This is the resource they have asked for, we are getting the money to them, we’ve been working with them, the police are also part of this national effort as well,” she continued.

Patel added: “I speak to police every single day as part of our operational discussions because of covid, and it’s clear right now we are seeing a small uptick from policing perspective.

“But because people are stuck at home – trapped at home – they [domestic abuse victims] are using other means of communication, such as the helpline, such as the online services to seek support.

“The refuges and charities are working flat out and they are doing an amazing job right now, working across the country for men, women and children who too are victims, to make sure they are not alone, they are being safeguarded and getting the help and support they need right now because of this crisis.

“And it’ll be fair to say there will be more money coming,” those watching at home heard her explain.

Many viewers took to Twitter to comment and one said: “I’m just astounded as to how heartless and unsympathetic Priti Patel comes across! #ThisMorning.”

“Domestic abuse @#PritiPatel where is your empathy @#ThisMorning,” someone else asked.

A third wrote online: “Ruth: ‘10 women have died due to domestic violence since the lockdown. Is this too little too late?’ Priti Patel: ‘No, not at all!’ So, so cold!  #ThisMorning #PritiPatel.”

“Priti Patel talking about Domestic Violence and funding towards charities etc. Ruth just informed her that the death rate of women and children has increased since the lockdown and then asked, “Don’t you think that you are acting a bit too late?” “No, not at all!” #ThisMorning,” another stated.

“She’s very matter of fact about domestic violence, but imagine the poor person being abused and can’t get access to help because they’re trapped inside a house with the abuser.  #ThisMorning,” one viewer chimed.

This Morning airs weekdays at 10am on ITV.