March might have come in like a lamb but it’s going out like a circus bear sleeping off a sugar high after an ill-advised venture through the bleachers to forage on leftover cotton candy and nachos. Which is to say, everything seems quiet but it’s an uneasy quiet from which anarchy might spring at any moment.

This lurking sense of drama likely comes from the fact that there really isn’t any drama to speak of currently within the world of TV awards. Various guilds are recognizing winners that repeat themselves show after show, “The Crown,” “Ted Lasso,” “The Queen’s Gambit,” repeat. And if a show does deviate from the script it’s often only to honor a series that won’t be eligible for the upcoming Emmy season, which primarily means “Schitt’s Creek.”

And yes, not everything has been decided yet, but there’s definitely a sinking sense that this might be it, in so far as the winner’s circle come September, which is where the uneasiness comes in.

It’s too quiet. Coming off the heels of a truly unprecedented year it seems unthinkable that things could return to such mundanity already. But until we can figure out what’s lurking in the shadows of the future, all we can do is wait it out.

The past week has seen the NAACP Image Awards announcing its winners via live stream, in anticipation of the televised ceremony to be held Saturday, March 27 at 8:00 PM ET on BET.

Each year the Image Awards presents a refreshing departure from the rest of the winter and spring awards, recognizing artistic endeavors from people of color in categories including TV, music, literature, film, as well as those individuals who utilize their projects to further social justice causes.

The TV comedy categories are nearly unrecognizable as compared to the Primetime Emmy Awards, with ABC’s “Black-ish” and HBO’s “Insecure” being the only series nominated that have also competed for comedy series at the Emmys. Other comedy nominees include Netflix’s “#blackAF” and Freeform’s “Grown-ish” — which means Kenya Barris created three of the five shows nominated — with the category rounded out by TBS’ “The Last O.G.” 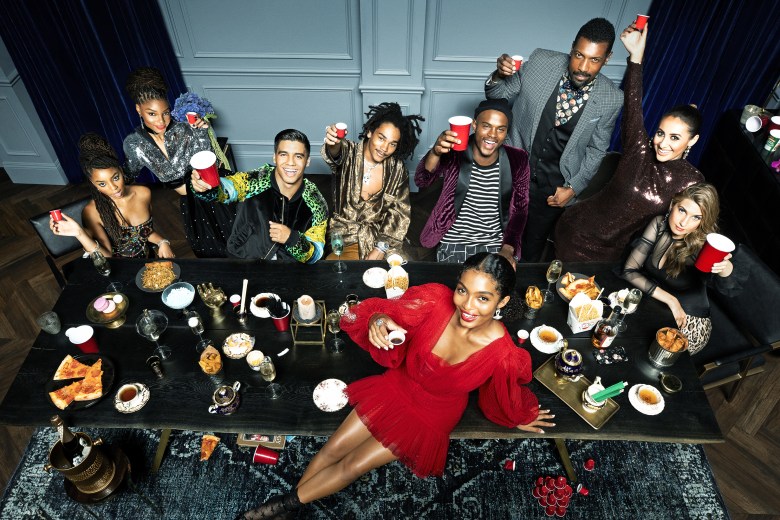 Among the Image Awards TV drama series nominees only NBC’s “This Is Us” has also competed for drama series at the Emmys, but part of that is a function of how many new dramas the NAACP recognized this year. While CBS’ judicial drama “All Rise” was nominated for its second season, Netflix’s “Bridgerton,” HBO’s “Lovecraft Country,” and Starz’s “Power Book II: Ghost” are all nominees for their first seasons.

As always, it’ll be interesting to see how the winners play out, particularly when it comes to a “Bridgerton” v. “Lovecraft Country” showdown, a match-up that could ostensibly repeat itself at the Emmy Awards.

Meanwhile, at Wednesday’s PGA Awards, it was more of the same with “Schitt’s Creek,” “The Crown,” and “The Queen’s Gambit” all picking up major awards and sparking more thoughts about the still-growing strength of Netflix’s royal rumble.

It’s not like we haven’t seen shows dominate a year in drama series before (See also: “Succession”), but what makes “The Crown” such an awards threat is that, at present, there doesn’t seem to be any show that could launch a plausible campaign against it.

Also, it has narrative on its side, what with being denied the top prize for all of its previous seasons and never being able to elbow its way to the top in competitive years. This year clearly upends that tradition, with a field wiped out by a global pandemic coupled with “The Crown” putting up arguably its best season to date.

And last Sunday we saw more, more of the same, this time from the industry’s writers.

As expected, Netflix’s “The Crown” took home the drama series prize, while Apple TV+’s golden boy “Ted Lasso” while landed on top for both comedy series and new series, again confirming perhaps the one sure thing to come out of the pandemic: People frickin’ love “Ted Lasso.”

The series did not, however, take home a third WGA honor in episodic comedy, where it was edged out by Hulu’s royal comedy “The Great” — though, to be fair, I’ve previously warned it was a show that was definitely in play when it came to the comedy categories.