On Wednesday, The Conners returns with its midseason premiere, welcoming Candice Bergen to the ABC spinoff as Barb, the sharp tongued mother of Ben (Jay R. Ferguson) who shows up and rattles her son with shocking news about their family. Ferguson as well as star and executive producer Sara Gilbert open up to ET about landing the five-time Emmy winner and what’s to come for the rest of season, especially as it continues to deal with the coronavirus pandemic.

At its core, The Conners has always been about how the working-class family — Dan (John Goodman), Jackie (Laurie Metcalf), Darlene (Gilbert), Becky (Lecy Goranson) and D.J. (Michael Fishman) — comes together to navigate the daily struggles of living in Lanford, Illinois. But those challenges are compounded in season 3, when the family is faced with the biggest challenge of all.

“We felt that we have an agreement with our audience that we’re going to try to represent working-class America, and this is a big issue going on right now,” Gilbert says of the show’s choice not to ignore it for fear of fatigue. “And it would feel disingenuous for us to just be out at stores, out at restaurants, living life in a way that doesn’t represent what’s actually going on and the struggles that are going on in terms of health, but also in terms of the economic toll it’s taking.”

For Jackie, that means trying to keep the Lunch Box afloat by shifting to takeout and delivery while Darlene and Becky go to work at  Wellman Plastics, where Roseanne and Jackie used to work. (According to the show, the plant reopened due to supply-chain disruptions caused by pandemic. And the two sisters are now supervised by Robin, played by Alexandra Billings.)

For Gilbert, it was important for the series to return to such a pivotal place in the show’s history. “I like portraying the fact that it can be almost impossible sometimes for families to break the cycle,” she says. “For them to have worked all their lives to try to get out of there and be back at square one is very poignant and an important story to tell.”

When it comes to landing a TV legend like Bergen for episode seven, “A Cold Mom, a Brother Daddy and a Prison Baby,” it was just a matter of asking and hoping she would say yes. “It’s a good lesson, right? Because there are so many times in casting where you sit there and think, ‘Well, this person will never do it, or they can’t be available or interested in it,’” Gilbert says, adding that they were thrilled when she agreed to appear on the show.

“She’s such an icon,” the actress continues. “Honestly, watching her in person, it’s more than you even picture in your mind. She came and just brought so much energy, so much creativity.”

For Ferguson, it was an opportunity to watch “a juggernaut in our industry” in action. “It’s always a dream come true to get to work with the legends and I always feel very lucky to be in that position,” he says, revealing that he made sure that “I didn’t forget any of my lines. I didn’t want her to see me as being unprofessional in any way so I tried to just be the best version of me that I could.”

The episode, which finds Ben dealing with some unexpected news from his mother, is also a big moment for Ferguson’s character. “I was very excited when I read the script,” he says of learning more about Ben’s backstory. “There’s a lot of mouths to feed on this show, so having any focus come in my direction is very flattering.”

He adds that this season has been different for Ben. He, along with Darlene, “had one foot out of the Conner house at the end of last season and now they’re back in, you know, locked in by circumstance. And so it’s been a little bit of a role reversal for Ben and Darlene, with him being a little down on his luck and trying to find his place and figure out what his next move is.” 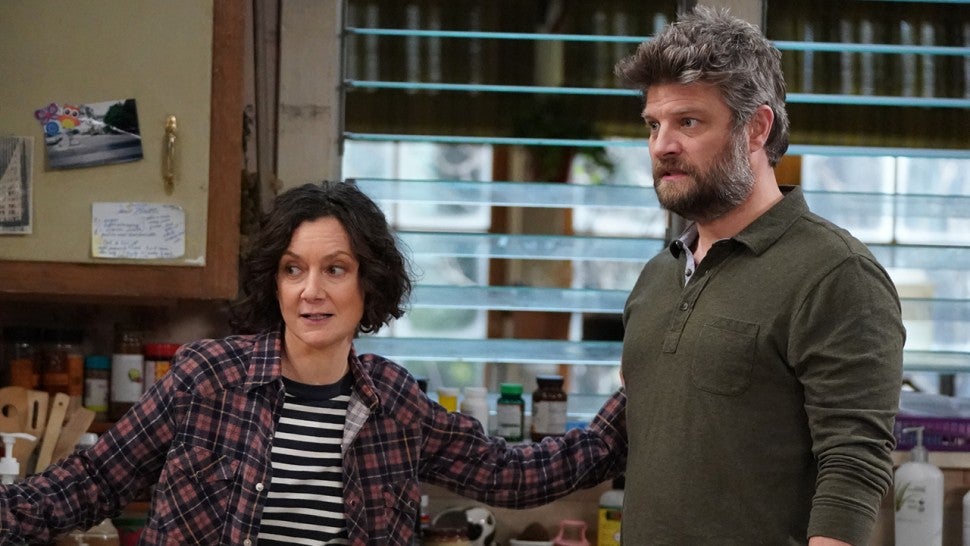 Gilbert teases the revelations about Ben’s family “has some repercussions,” adding that it’s also a storyline that the series will pick back up again, especially if Bergen is able to return. “We are hopeful that she’ll do more episodes and we’re in discussions around it,” she shares.

One thing they had hoped to do was have Bergen’s appearance overlap with Estelle Parsons’ return as Roseanne and Jackie’s mother, Beverly Harris. However, “it’s proving difficult in the time of COVID because Estelle lives on the East Coast,” Gilbert reveals, adding that one character doesn’t cancel out the other. “The more of that type of character, the better in my opinion.”

Bergen and Parsons’ return in season 3 aside, Gilbert teases what’s to come this spring. “There is an episode that’s just funny, which sees Jackie and her boyfriend drink an herbal medicinal tea. She cleanses her demons and does some personal journey work. That’s a pretty good one,” she says. Meanwhile, Ferguson is excited for some moments that Ben has with Dan. “We definitely have some fun this season, John and I do,” he shares.

The Conners airs Wednesday at 9 p.m. ET/PT on ABC.