GMB: Piers Morgan swears as he suggests a tattoo for himself

Susanna Reid, 50, was joined by Piers Morgan, 55, to discuss the latest headlines coming in from across the globe. However, the Good Morning Britain team soon began debating members of the public having tattoos and whether they are acceptable in the workplace. As the outspoken journalist launched into a furious rant about his opinion on the matter, he ended up insulting himself and left those listening in utter shock.

In the midst of the debate and reading some viewers’ comments, Piers said: “Someone said I should get a tattoo live on the show.

“B*****d!” her co-host replied before instantly putting his hand to his mouth as he realised he’d sworn on air.

Susanna was left with an open mouth as she was shocked and left speechless that her fellow presenter had used such language at 7am in the morning.

“You said it,” she remarked sometime later as she burst into hysterics. 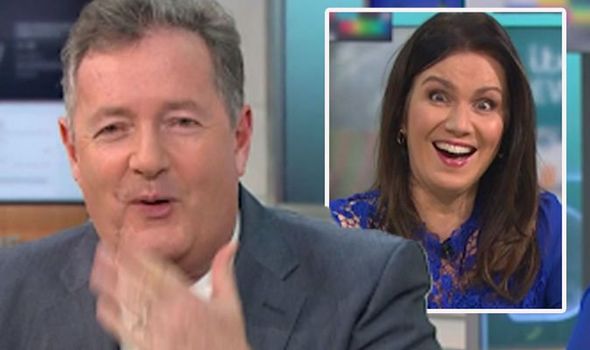 Taking to Twitter, viewers joked they were in agreement with Piers as one wrote: “#GMB ha ha B*****d…you said it mate!”

Whilst a third commented: “Ha @piersmorgan calling himself a B*****d live on @gmb is the #Wednesdayvibe we all need.”