Susanna Reid, 49, was on hand to host Good Morning Britain today alongside co-star Piers Morgan, 55, and in an attempt to lift viewers spirits, they spoke with D-Day veteran Ken. After becoming an internet sensation, the war hero recalled his life with Aida and their 70-year marriage together. On hearing the story of the guest’s beloved, the host said she and others had been left in tears over the video of him getting a pillow with his other half’s on. 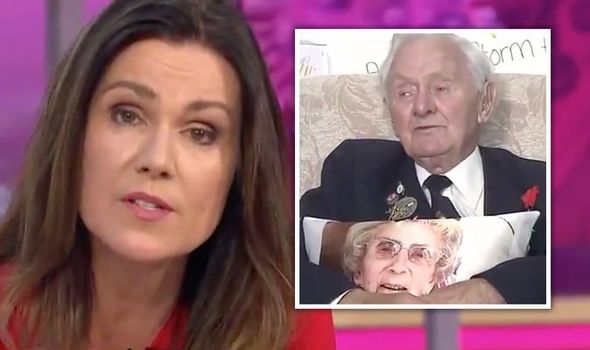 Ken has always slept with a picture of his late wife Aida since moving into Thistleton Lodge nursing home and the longing for his beloved didn’t go unnoticed by those caring for him.

Care worker Kia Mariah Tobin wanted to give the pensioner something to remember his wife by which was a bit more comfortable to sleep with.

In a one minute video, which has now gone viral on social media, shows the carer gifting the 94-year-old with a pillow of his Aida’s face on it.

Bursting into tears, it was clear the elderly man was thankful for the thoughtful present, meaning he can always have his late wife with him.

Much like him, Susanna was touched by the kind gesture of the gift and had to fight back the tears as she spoke with the man himself.