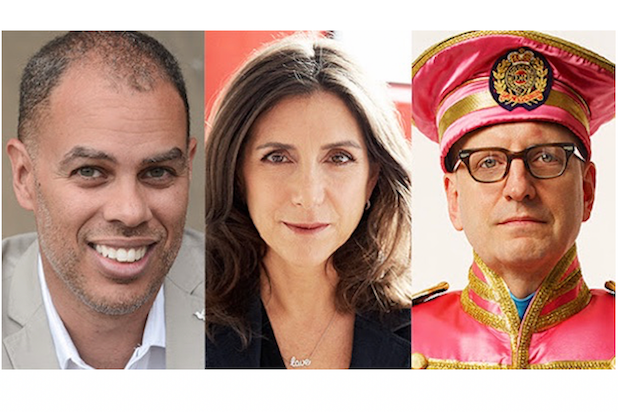 Director Steven Soderbergh and producers Stacey Sher and Jesse Collins will produce the 93rd Academy Awards on April 25, 2021, the Academy announced on Tuesday.

The announcement did not specify whether the show would be in-person or virtual, a decision that will not be made until the course of the COVID-19 pandemic is clearer.

While Collins is a television producer with a long history of producing live awards shows like the Grammys, BET Awards and Soul Train Awards and Sher is a veteran producer with Oscar nominations for “Django Unchained” and “Erin Brockovich,” the presence of Soderbergh on the producing team is a surprise and something of a coup for Academy president David Rubin.

Soderbergh, who won the Best Director Oscar for “Traffic” in 2000, is an adventurous and iconoclastic film and television director whose work includes “six, lies and videotape,” “Contagion,” “Out of Sight,” the “Oceans” movies, “Magic Mike” and the recent HBO Max film “Let Them All Talk.”

This will be the first Oscars for all three producers, and the first time the Oscars have had more than two producers since 1985, when the job was handled by Gregory Peck, Robert Wise, Larry Gelbart and Gene Allen.

“We’re thrilled and terrified in equal measure,” Collins, Sher and Soderbergh said in a statement. “Because of the extraordinary situation we’re all in, there’s an opportunity to focus on the movies and the people who make them in a new way, and we hope to create a show that really FEELS like the movies we all love.”

Rubin and Academy CEO Dawn Hudson called the upcoming Oscars “the perfect occasion for innovation and for re-envisioning the possibilities for the awards show.”

President-elect Joe Biden has said that on his inauguration day, he will call for all Americans to wear masks in public for 100 days. That 100 days would end about a week after the Oscars.

Here are the producers’ bios, from the Academy release:

Collins has produced numerous awards shows and events including the Grammy Awards®, BET Awards, UNCF An Evening of Stars®, Black Girls Rock! and Soul Train® Awards, and such television series and specials as “John Lewis: Celebrating a Hero,” “Bookmarks: Celebrating Black Voices,” “Change Together: From the March on Washington to Today,” “Sunday Best,” “American Soul,” “Rhythm + Flow” and “The New Edition Story.” He earned an Emmy nomination for the 61st Grammy Awards in 2019. Collins also has been tapped to co-executive produce the upcoming Grammy Awards and executive produce the Pepsi Super Bowl LV Halftime Show, both in early 2021. He is the founder and CEO of Jesse Collins Entertainment, a full-service television and film entertainment production company.

Sher earned Best Picture Oscar nominations for “Django Unchained” (2012) and “Erin Brockovich” (2000). She has produced or executive produced more than two dozen major motion pictures, including such notable films as “Pulp Fiction,” “The Hateful Eight,” “Contagion,” “Garden State,” “Man on the Moon,” “Out of Sight,” “Gattaca,” “Get Shorty” and “Reality Bites.” Her television credits include such series as “Mrs. America,” which earned 10 Emmy nominations, “Reno 911!,” “Into the Badlands” and “Sweet/Vicious.” She also served as an executive producer on the Oscar-winning documentary short subject “Period. End of Sentence.” (2018). Sher is currently a producer on the Aretha Franklin biographical film “Respect,” starring Jennifer Hudson, set for release in August of 2021.

Soderbergh won a Directing Oscar for “Traffic” in 2000 and earned a nomination for directing “Erin Brockovich” that same year. He also earned a writing nomination for “sex, lies, and videotape” (1989), his feature film directorial debut. A prolific writer, director, producer, cinematographer and editor, he has directed more than 30 films in a three-decade career, including “Magic Mike,” “Contagion,” the “Ocean’s” trilogy, “Out of Sight” and, most recently, “Let Them All Talk,” premiering this month. He also has produced or executive produced a wide range of projects for both film and television, including “Bill & Ted Face the Music,” “The Report,” “Ocean’s Eight,” “Citizenfour,” “Michael Clayton,” “Good Night, and Good Luck.” and two seasons of his own series, “The Knick.”