For anyone who has seen the documentary Amazing Grace, it’s hard to imagine a film to rival the one about the making of Aretha Franklin’s gospel album. But the new film Stay Prayed Up contains equally ecstatic moments of a gospel singer in performance, in this case a not widely known but deeply gifted woman referred to as Mother Perry.

For almost 50 years Mother Perry – Lena Mae Perry – has been singing hymns of praise as part of The Branchettes, a gospel group based in rural North Carolina. She is the last surviving member of the original trio, and directors D.L. Anderson and Matt Durning built the film around the recording of her first live gospel album.

The live recording was captured in April 2019, with Perry on lead vocals, “glittering keys from Wilbur Tharpe, soaring harmony and a thundering tambourine from Angela Kent, all backed by The Guitar Heels,” as the filmmakers note. 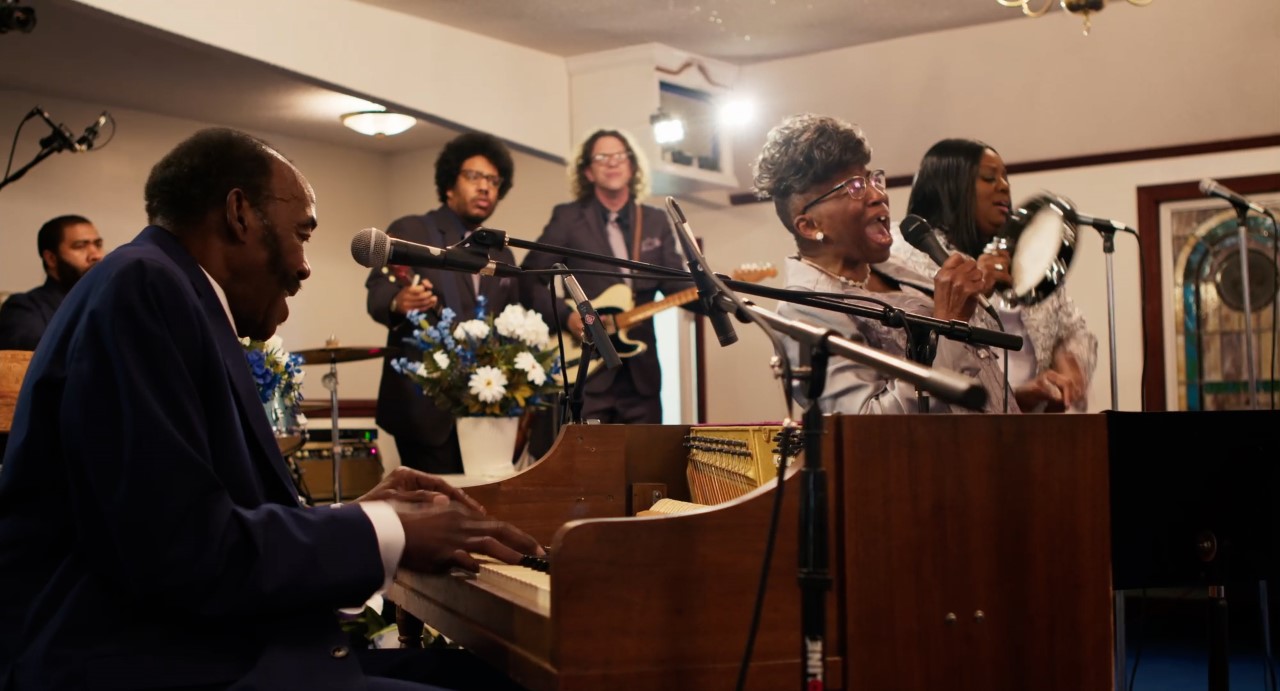 “They performed two sets,” Durning noted during an appearance for the film in Santa Monica over the weekend. “It wasn’t the exact same show, but they ran it twice. So we were able to make some decisions and to choose the camera positions and audience reaction shots and have two chances at that.”

Perry in her rich contralto and The Branchettes recorded a range of religious music including the up tempo “Come By Here” and the emotionally gripping “I Don’t Feel Noways Tired.” Just as with the Amazing Grace film, it’s not necessary to be religious or Christian to enjoy the music and feel its uplifting impact.

“My co-director, D.L .Anderson and I, neither one of us are very [religious] people,” Durning comments. “We never really felt a deep connection to organized religion. We don’t come from the church ourselves… The power in the story that kept drawing us in was for the first time, in Mother Perry, we saw the good in religion, like what is it in spirituality that can actually be a unifying and restorative or productive force in our society.”

For the filmmakers, making Stay Prayed Up did mean “going to church,” in a literal and figurative sense.

“It started with the very first day. We’d finished filming and Mother Perry asked to pray,” Durning recalls. “I’m not around a lot of like group prayer very often. It felt a little weird at first, holding hands and having a prayer. But just this idea to stop in your day, every day, and just articulate gratitude for the things that you have, for the people you get to share your day with, for the food you get to eat… that was a very powerful experience for us. That was our goal to just let an audience experience that too.” 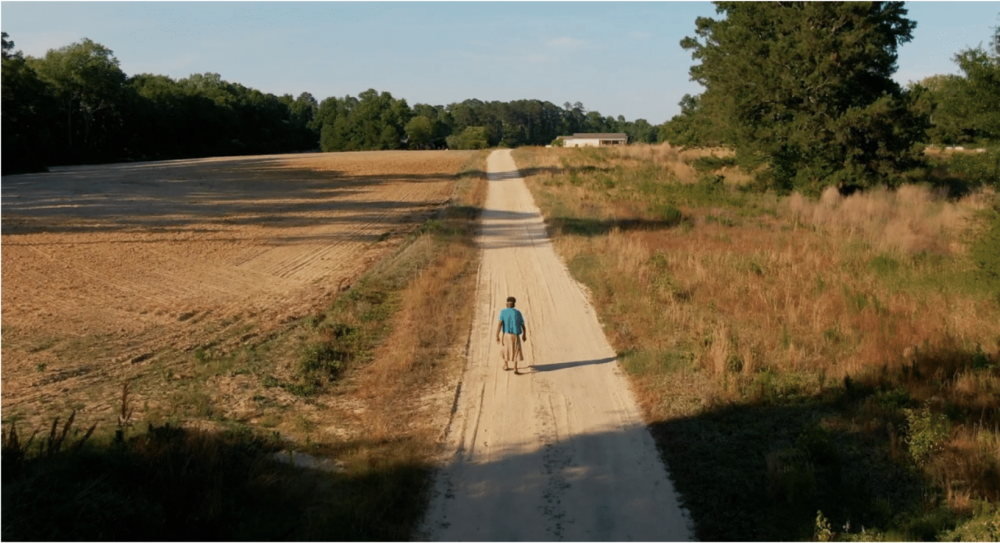 The film distributed by Greenwich Entertainment is playing this week in New York, Santa Monica, Cincinnati, Ohio, Chicago and Normal, Ill., Louisville, Kentucky, and several locations in North Carolina, including Chapel Hill. It becomes available on demand on iTunes and Amazon on July 5. The recording is available through Spiritual Helpline, a record label and production company founded by Phil Cook with a mission to showcase gospel-inflected roots music that might otherwise go unrecognized.

“Through music, conversation and films,” the company website notes, “Spiritual Helpline celebrates the sacred sounds of tradition bearers in the South, and beyond.”

Cook is a white musician originally from Wisconsin. He has made a point of not co-opting work by African American artists embedded in the Black experience.

“Phil had already committed with the making of the album… that he would invert the power structure traditionally found in the recording industry where the engineer, recording artist is making a tiny bit of money and the publisher is making all the proceeds,” Durning says. “He flipped that, so Mother Perry has an 80 percent stake in all the proceeds from the album. And Phil as a producer only has a 20% stake. So he said, ‘If I’m going to make a film with you guys and we’re going to make the film with her, the same has to be true with the filmmaking relationship.’”

Mother Perry’s daughter Lena C. Williams is a producer on the film. Durning says mother and daughter “had a 50 percent stake in the film in terms of creative control, editorial control and ownership of the film for any potential proceeds that would be seen down the road.”

The directors retained folklorist Michelle Lanier to work with them on the film. Lanier is connected with Duke University’s Center for Documentary Studies and oversees a number of museums, battlefields and other sites for the North Carolina Division of State Historic Sites and Properties.

“It was clear to us from the very beginning,” Durning says, “that if we were going to go in and tell a story about an African-American community and about an African American woman, as two younger white filmmakers, there were going to be a lot of things that we needed to make sure we navigated properly and gave the right deference to and had the right voices and support team around us to hold us accountable to implicit biases that we might have and not even be thinking about in the way we would approach the story. 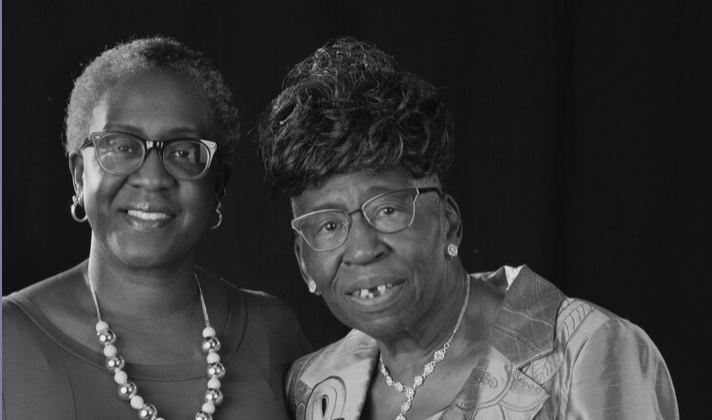 “By bringing Mother Perry and her daughter to the table as creative partners and then by bringing in Michelle Lanier as our folklorist and impact producer, I think that was one small step we could take to make sure that we were approaching this the right way and trying to flip some of the traditional power dynamics and filmmaking on their head a little bit.”

Mother Perry turned 83 on January 1st of this year. Stay Prayed Up is more than a concert film; it also follows Perry in her daily life, checking in with friends, and communing regularly with her four surviving children. Faith helped see her through the loss of one son, who died while serving in the U.S. military in Germany. As the center of the film, she radiates joy and caring for others.

“That is what Mother Perry represents, this endless, boundless, infinite love for everyone,” Durning says. “And to have gone through the things she’s been through in her life, with the racism she faced as a child, with the loss she’s had with her son passing away and to still project so much hope and so much understanding and grace and love for everyone, it just blew us away.”

Space Ranger’s Opening Gets Gobbled Away By ‘Jurassic World Dominion’

Netflix Suspends ‘The Chosen One’ Production After Two Die, Six Injured In Crash

The Film That Lit My Fuse: ‘The Survivor’ Director Barry Levinson