Bursts of experimental style are at odds with a simplistic premise in this slasher movie that poses the tired idea that the patriarchy is a killer. 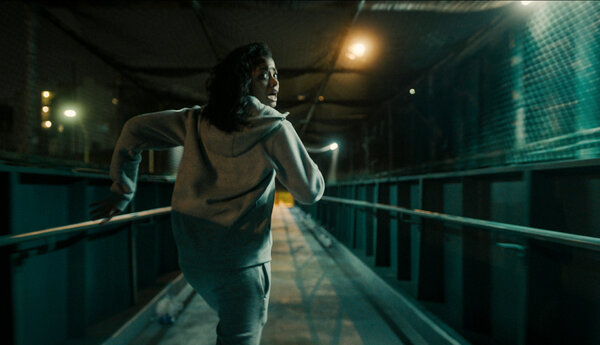 Steeped in social commentary but lacking in basic logic, “Run Sweetheart Run” follows a woman over one desperate night in Los Angeles. The story begins when Cherie (Ella Balinska), a young mom working as an executive assistant, agrees to a client dinner with Ethan (Pilou Asbaek), an affable moneybag. But the slasher thrills really kick into gear once the sweet date turns sour, and then savage: During a nightcap, Ethan attacks Cherie and reveals his plan to hunt her until dawn.

Like a bloodstained “After Hours,” the movie goes on to trail Cherie as she scampers away and seeks refuge in a series of urban sites: police station, apartment, overpass, church, nightclub, bathhouse. The director, Shana Feste, renders these settings in a green palette and high-contrast lighting, and their surreality suggests that Cherie has fallen down a rabbit hole; the horror Wonderland where she lands is peopled with doomed women and leering male brutes.

Playful elements punctuate the menace. When danger approaches, “RUN!” appears across the screen, like a private alarm bell for our heroine. In other moments, Ethan cheekily breaks the fourth wall to aim the camera elsewhere before he inflicts harm on victims. These bursts of experimental style feel at odds with the movie’s core: a simplistic parable of pervasive sexism. We get it: The male villain is a stand-in for the patriarchy, and for women, it’s an uphill battle just to survive. No need to bludgeon us over the head with it.