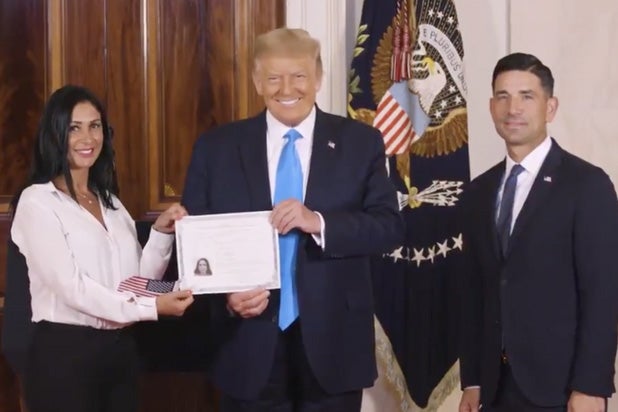 Tuesday’s Republican National Convention sparked uproar on social media from some politicians and commentators for including a naturalization ceremony in the White House, featuring a government official who may be illegally occupying his position, at a political campaign event — and also at a time when U.S. immigration has been delayed by the Trump administration amid the pandemic.

The pre-taped ceremony featured 5 citizenship applicants from disparate backgrounds, with their oaths of citizenship officiated by acting Secretary of Homeland Security Chad Wolf, as Donald Trump watched. Afterward, Wolf effusively praised Trump and the newly inducted citizens were encouraged to do the same.

It appears to be a wholly unprecedented politicization of the naturalization ceremony. No president has ever used such a ceremony as a campaign event, according to the New York Times. And complicating matters further, two weeks ago the Government Accountability Office determined that Wolf is breaking the law by continuing to act as the head of DHS because he was never lawfully appointed.

Both aspects of the event appalled observers as it was happening and afterward.

“My mother was a naturalized citizen. Donald Trump using the ceremony that meant so much to her (in large part because she was excited to be able to vote) IN the White House, is really hard to watch. It’s an abomination, in that this ceremony is NOT about worshiping a president,” MSNBC’s Joy Reid tweeted.

“This is un f’n believable. The most anti-immigrant President in history staging a naturalization ceremony in the WH, with military in uniform, FOR A POLITICAL CONVENTION. infuriating,” former Sen. Claire McCaskill tweeted.

Some also zeroed in on the participation of acting Homeland Security secretary Chad Wolf as a potential violation of the Hatch Act, which generally prohibits government employees in the executive office from participating in political activity while “on duty, in any federal room or building, while wearing a uniform or official insignia, or using any federally owned or leased vehicle,” according to the U.S. Office of Special Counsel.

“The Hatch Act is a law designed to separate politics from public service. Those lines are being erased tonight,” Valerie Jarrett said.

See some of the reactions below: