Although Leslie Knope (Amy Poehler) from NBC’s Parks and Recreation has her own plans for a presidential run in 2024, she is likely hosting her own, well-planned and detailed inauguration party to celebrate Joe Biden becoming the next President of the United States. Or she managed to get on the exclusive shortlist of invitees. 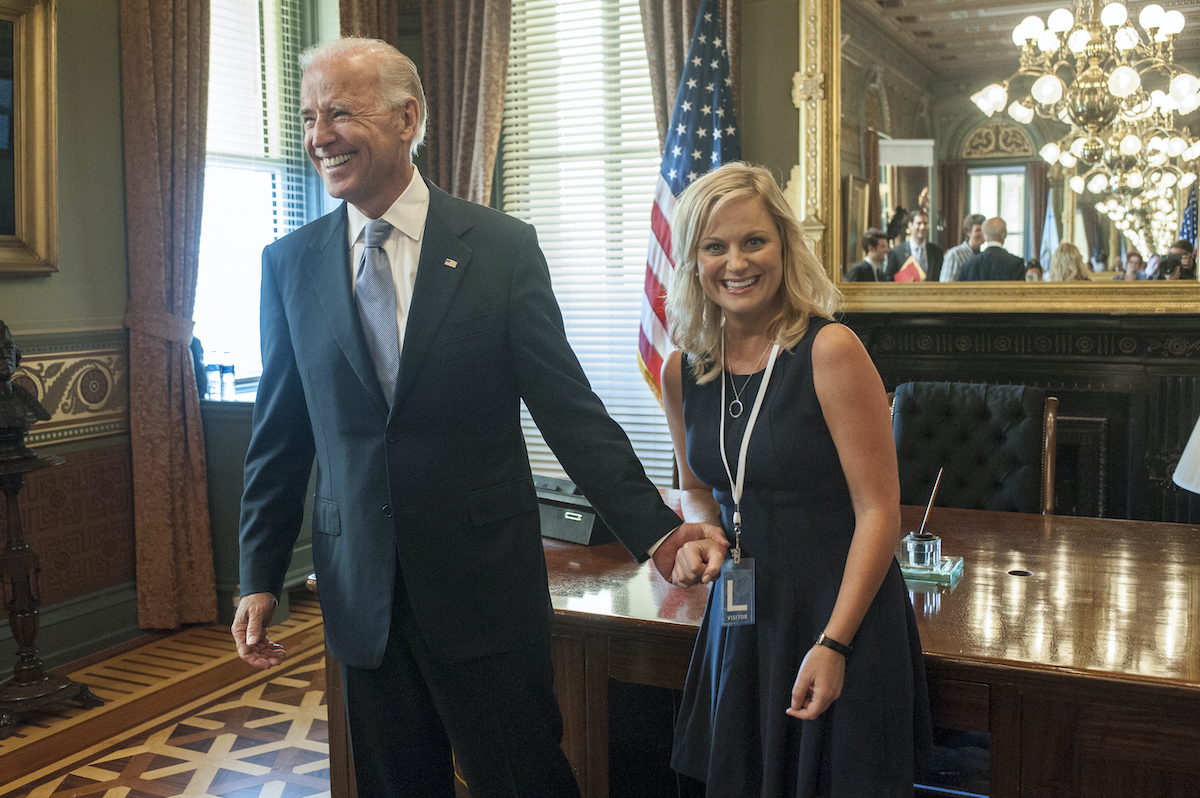 Either way, Parks and Rec celebrated Biden long before he tossed his hat into the presidential race. Biden made two cameo appearances on the series. His first was a moment that left the usually talkative Knope speechless and feeling extremely awkward. The second appearance was just as awkward but involved a game of charades.

Biden’s second appearance didn’t predict his win, but it was the cherry on top of a sweet comedy series sundae. He helped to bring the beloved show to a close as Knope and husband Ben Wyatt (Adam Scott) dined at the (White House) Biden’s home in 2025 before possibly launching into a savage game of charades.

The time when Leslie Knope met her hero

During Biden’s first appearance, Wyatt paves the way for Knope to meet her hero, Joe Biden. He surprises her with a visit and she is stunned to have the opportunity. “How did you … how did you do this,” she says to Wyatt without taking her eyes off of Biden.

Biden spies Knope and excuses himself from the group of people he was in the middle of meeting. He flashes his signature million-dollar smile as he walks toward (a terrified) Knope. Wyatt introduces himself to Biden as Knope stands by looking like a zombie. Of course, the minute Biden welcomes her, Knope breaks out in awkward laughter.

“My name just came out of your mouth,” she says, half hyperventilating half-laughing. “This isn’t happening. This isn’t real.” Of course in true Knope fashion, she thinks Biden wants her to take over for Secretary Hillary Clinton.

But in true Biden fashion, he says he wanted to meet and congratulate her for doing such a great job in Pawnee.

Knope must have known what was up because before she leaves Biden, she tells the Secret Service, “You don’t let anything happen to him! You understand me? He’s precious cargo!”

How it started, how it’s going

Knope went from a shaking fangirl to a formidable opponent – in charades. The series finale is set in 2025 at Biden’s home. President Biden’s appearance on the series finale of Parks and Rec was aspirational as the scene envisions Biden at a “nice house” in Washington D.C.

Biden is hosting a dinner party and Dr. Jill Biden tells the group, no shop talk. “I’m looking at you Leslie,” she says. Knope says as long as they can still play charades.

The Bidens walk toward the table and Biden hilariously says to his wife, “The last time we played charades she spent three and a half hours here.” But Dr. Biden reminds her husband he’s only mad because he lost.