Almost 30 years after “Pulp Fiction,” these kings of cool team up for a Hawaii-set action feature that isn’t as much fun as it sounds. 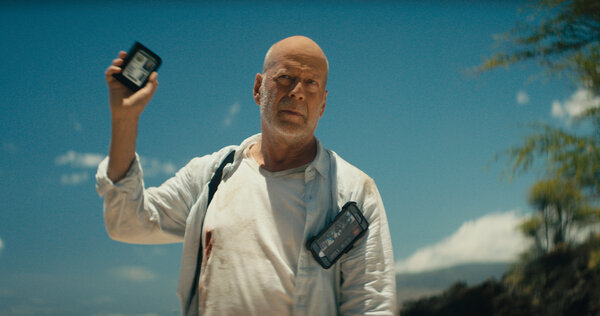 An action movie starring John Travolta and Bruce Willis that shares a title with a 1987 Guns N’ Roses song sounds like one of those fake movies joked about on “Seinfeld” or “30 Rock.” And yet “Paradise City” is a reality of sorts, albeit an uncomfortable reality.

This movie was completed before it was announced that Willis would step away from performing after being diagnosed with aphasia, which affects the brain’s language center, and before upsetting reports of Willis’s struggles on set and of the accommodations he sometimes required.

In his relatively short on-screen time, Willis, playing a hard-bitten bounty hunter shooting his way through Maui, appears relatively alert and aware. But his one scene with Travolta, who plays a fat cat trying to secure mining rights on Indigenous Hawaiian lands, was clearly achieved through editing, and many of Willis’s other exchanges don’t have him sharing a frame with his co-stars. More than once it sounds as if his dialogue was dubbed in by a similar-sounding actor. It’s a far cry from 1994’s “Pulp Fiction,” in which Travolta and Willis had minimal, but crucial and memorable, on-screen interactions.

Directed by the action veteran Chuck Russell (“The Mask,” “Eraser”), the scenario of land-grabbing and righting wrongs mostly centers on do-gooder mercenaries played by a laconic Stephen Dorff and a fresh-faced, but not exactly sure-footed, Blake Jenner.

The movie’s generic quality is spruced up by eccentric plots points (go-go dancers who also serve as undercover eco-activists, a nice Andy Sidaris-like touch) and kooky dialogue, as when the villain played by Travolta observes, “The only thing I’m scared of is me. And I am me, so there’s nothing to be scared of.”

Paradise City
Rated R for violence and language. Running time: 1 hour 32 minutes. In theaters and available to rent or buy on Apple TV, Google Play and other streaming platforms and pay TV operators.