All episode long, Smith’s Nell grappled with the idea of permanently taking over Hetty’s position as operations manager, a job she’s unofficially held for much of the season. And when it came time to make a final decision about her future at NCIS, she chose to take a risk: Relocate to Tokyo with Foa’s Eric and head up a new office there.

“The door will always remain open for Nell at NCIS, but right now, it’s time for Nell to really explore her next adventure,” Smith told ET of her goodbye. “Nell is a smart girl and she’s chosen stability for a good long time because it was the smart choice. But now she’s really questioning what she wants. And I commend her for being brave enough to even consider that line of questioning.”

“It’s truly difficult when you work with people you love who have become your family, who become so much more than your co-workers. A lot like me and our fabulous crew at NCIS Los Angeles,” she said. “I do commend Nell for stepping into her power and really making a decision to serve herself rather than people-please and to serve others. It’s quite commendable.”

With NCIS: LA gearing up for season 13 this fall, Smith opened up about leaving the series after more than a decade as Nell, how she thinks her character will fare post-NCIS and her future career plans.

ET: Were you aware at the start of this season that this would be it for you? What were those conversations like that you had with the producers?

Renee Felice Smith: More than anything else, it’s about telling the story and throughout this season, we got to watch Nell really grow in terms of her abilities as a leader. The focus is really character growth and Nell, a lot like myself, was ready for something else. I think that it’s hopeful. It’s a hopeful parting for Nell. That’s how I think of it.

For most of the episode, Nell’s grappling with whether to take Hetty’s job permanently and whether she wants the office. How do you think she would have fared if she did decide, “Yeah, maybe I am ready to have the title and step into those footsteps officially”?

I don’t think Nell was ready for that sort of responsibility. She understands the gravity of committing to a position of that status. I don’t think she was ready for that to be the next 40 years of her work life. Like I mentioned earlier, Nell’s a smart girl. She made the smart choice for a long time. She chose the stability at NCIS: LA and within NCIS because she genuinely enjoyed the work and even more than the work, I think she enjoyed the company of her fellow teammates.

But at the end of the day, you’re right. She was deeply conflicted about her line of work and the impact that it had. When someone can stand in their power and say, “You know what? This isn’t for me right now, I need to go off and for lack of a better term, find my own path.” That’s probably one of the bravest things anyone could do. It doesn’t surprise me that Nell is taking the risk; she’s a risk-taker. It’s exciting. There’s newness on the horizon, which is very exciting.

The sky’s the limit for now, to be honest. She’s sheer potential. There’s nothing more exciting than when someone says, “I’m going to see what this thing can do.” That’s truly what she’s saying. For now, she’s saying, “Respectfully, thank you for the opportunity, but I’m going to have to pass. I have to see for myself if this is what I want to do with my life.” She was so young when she started at NCIS: LA, much like myself, Renee. I was fresh out of drama school. So it’s time to take the leap out of the nest, and I truly believe that the best is yet to come.

One of my favorite scenes was Hetty and Nell’s lovely moment together. Can you talk me through filming that scene? That must’ve been a satisfying bow?

You are absolutely right. It was quite emotional to have Linda [Hunt] back on set for our final day of the season. That scene was our final day of the season and she was essentially sidelined by the pandemic. To see her in the flesh, let alone share a scene with her, it was just the ultimate. Linda is a master and whenever I’m in a scene with her, I am really the student. I’m just absorbing, I’m the little sponge, I’m watching her work and it’s been the greatest gift and such an incredible opportunity to play opposite Linda Hunt, Oscar winner, for the past 10 years. It really is this bittersweet reunion between Nell and Hetty. Nell wants to stay and catch up with her mentor, who she has deeply missed, but she can’t because she’s made her decision. 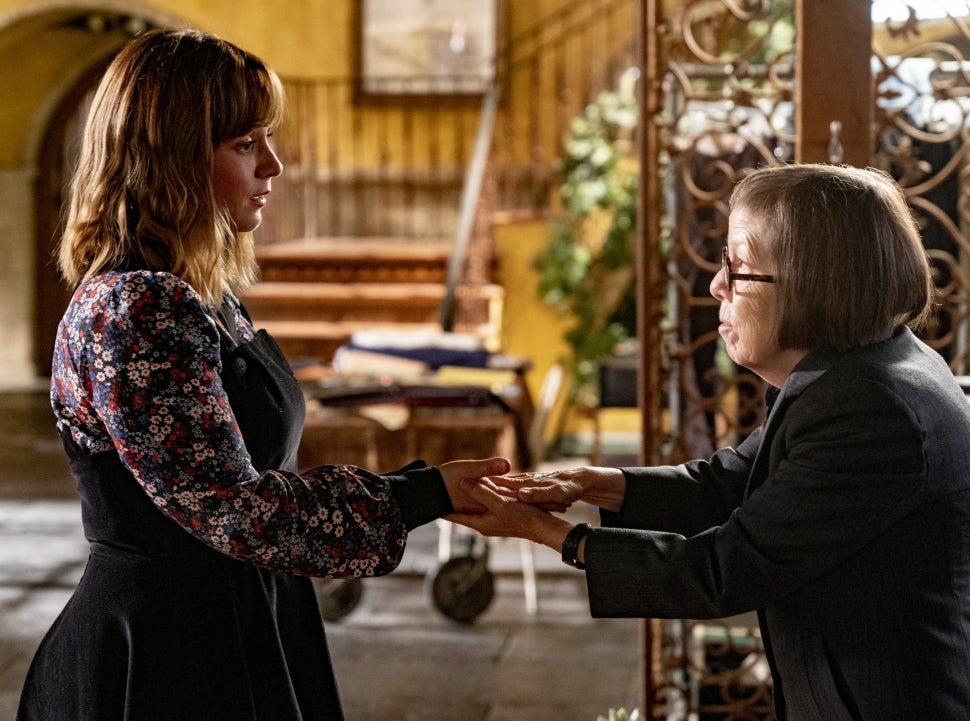 It’s really this “goodbye for now” theme. Linda and I share this mutual respect for each other, and we share this really, very special friendship. I hope that shows through. It’s probably my favorite [scene] of my entire career, just because it’s with Linda and she’s a magical creature and I drink her in. Really any time I can spend with her is just a gift.

What is the likelihood of you popping in once in a while in the next season or beyond?

Never say never, right? It all truly depends on scheduling, but never say never. The door is always open for now. I think it’ll remain open, but for now, it’s time for her to go about her merry way and find her next great adventure.

What will you miss about the show and being part of this family?

I am more than grateful for my time spent at NCIS: LA. It’s really been a practical film school for me. I learn through observational osmosis. I’m a student, and so, the lessons that I’ve learned, I will for sure tuck safe inside my Mary Poppins carpet bag of tricks and employ them in the next chapter on the next job. I will miss the people. I will miss the people greatly. I’ve made lifelong friendships here. I essentially spent kindergarten through 11th grade with these people. When you think of it like that, it’s kind of wild to think about the breadth of time, but I just want to say I’m so thankful for our audience. I’m thankful for them praising Nell, for respecting her intelligence. I’ve always been cast as the funny friend, but with Nell, I got to play so much more. I got to play a human who doubts and feels, who has empathy and therefore is deeply conflicted about her line of work. Someone who is multifaceted and really can see multiple sides of the story. Sure she’s smart and she’s strong-willed, but Nell is also compassionate and understanding. That’s what makes her a great leader. Her vulnerability is her strength. I’m so grateful to have been able to play a character who can express herself in that way and that it doesn’t take away from her strength. That’s so valuable for young people, for all people to know and to feel and to see. I’m just going to say, thank you.

What are you excited about next?

I am a storyteller. I’m a writer, I’m a director, of course an actor, but really what I’m interested in doing is telling stories. We have a few TV projects that are in development with CBS. And we also, I say we, my creative partner, my life partner, my other half, Chris Gabriel and I, we wrote our very first children’s book, Hugo and the Impossible Thing, and it was released last month by Penguin Random House. We are so excited that it’s finally out in the world. As an actor, you’re often carrying out someone else’s idea, but as a creative person, I’m really excited for the opportunity to bring my ideas into the world into our collective reality.

What’s the book about?

We wrote Hugo and the Impossible Thing as a celebration really. Once our dog, Hugo, recovered from a life-threatening illness — it was an inoperable tumor that almost everybody told us would be impossible to beat, but he did it. Through great determination and really some truly brilliant doctors, Hugo made it to the other side of his illness. We wanted to share Hugo’s story, but we knew we also needed to create a metaphor in which to do so because we’re not writing a children’s book about a dog with a brain tumor. We created the metaphor of the impossible thing, and it’s really this labyrinth that Hugo and the forest animals have to navigate and find their way through. We hope to inspire young thinkers to reframe the word impossible. It’s about questioning and overcoming the seemingly impossible, because societally, there’s a tendency to label potentially challenging moments or obstacles as impossible when in reality they’re just extremely difficult.

For more, watch below.