Fresh out of Yale Drama School, the actress plays the tough yet warm Jolene who quickly befriends Beth (Taylor-Joy) during their time as kids in the coming-of-age drama. Her tough love is what helps Beth navigate life in the orphanage before she’s eventually adopted.

“I just love how she’s just so tight with Beth that she’s able to say whatever needs to be said,” Ingram tells ET. “It just is what it is. And sometimes it might not sound pretty, but when you love someone and something needs to be said, you need someone who loves you enough to give it to you real.”

As the story moves forward in time and an addiction-addled young adult Beth is on the brink of collapse, Jolene returns. Her newfound presence is the dose of reality Beth needs to remind her what she cares about most: chess.

“Jolene is the grounding force in Beth’s life. And as they get older, she is the only person at that point who knows her from when she was prepubescent and that carries over,” Ingram says. 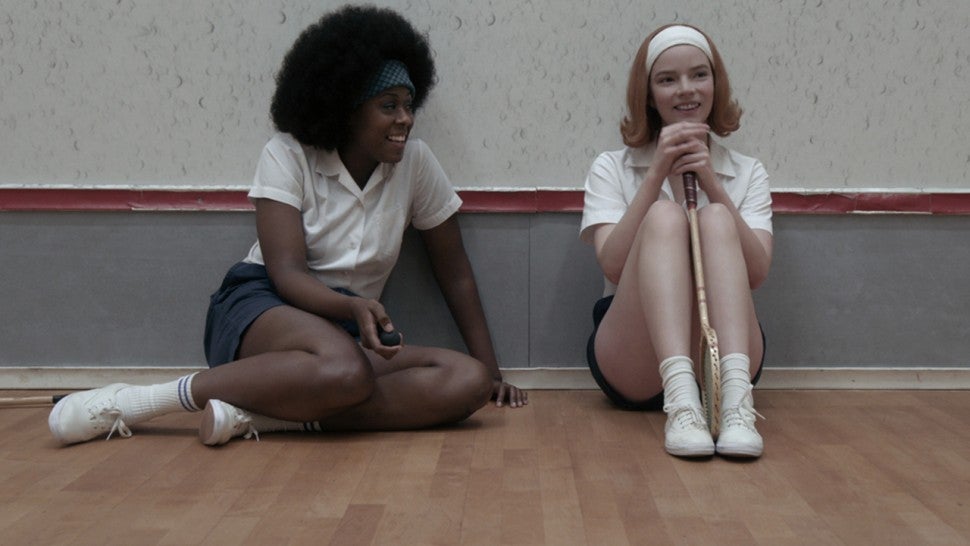 Later, as Beth scrambles to figure out how to travel to Russia for the most important tournament of her career, Jolene offers her the money she needs to cover expenses. As the only Black person in the series, this moment is reminiscent of the longtime storytelling trope of the magical Black character who selflessly helps white people as previously seen in films like Ghost, The Green Mile and The Legend of Bagger Vance.

“You’re like my guardian angel,” Beth tells Jolene after she offers her the money.

“I’m not your guardian angel,” Jolene eventually responds. “I’m not here to save you. Hell, I can barely save me. I’m here because you need me to be here. That’s what family does.”

For Ingram, that dialogue was important in flipping the notion that Jolene is fulfilling that stereotypical role in this particular story. “I love that line that’s in there because it’s like, ‘I’m not in service to you. I’m here because I choose to be a part of your life and because I love you,’” the actress says, adding that “if it wasn’t spoken to, it would definitely be falling more in line with what that trope was.”

Ingram also credits co-creator Scott Frank, who wrote the series, “doing a beautiful job writing that scene,” she says. “You know, I’m also wearing my skin. We can’t act like it’s not there.”

Race also factors into The Tragedy of Macbeth, the upcoming adaptation of one of William Shakespeare’s most famous plays in which Ingram plays Lady Macduff opposite Corey Hawkins as Macduff, Frances McDormand as Lady Macbeth and Washington as Lord Macbeth. Set for a 2021 release, it’s being described as a thriller that echoes American crime fiction.

“We spent a lot of time around the table, getting into the work and nuances of certain words and what certain words mean,” Ingram says of casting Black actors in historically white roles. “You know, if you’re talking to me and you say, ‘Oh, pale…,’ that’s not going to be me. So, obviously, some things had to shift.”

For Ingram, who has performed in her fair share of Shakespeare plays in college, what stood out to her the most was “to be in period clothes and not be a slave is epic,” she says.

While she couldn’t reveal too much about this film iteration, Ingram says that “it was definitely fun to step into Lady Macduff. I’m super excited to have the opportunity to do something like this so early in my career.”

The Queen’s Gambit is now streaming on Netflix.