“Master of None” is known for deftly hopping between narratives. One episode may split its focus among an array of New Yorkers whose only bond was going to the same movie, and the next will dial in on a character trying to come out to her family over the course of several Thanksgiving dinners. Season 3 does shift its story while introducing a new central character, but unlike previous entries, it doesn’t move on. Subtitled “Moments in Love,” the truncated, five-episode Season 3 tells the story of Denise (Lena Waithe) and Alicia (Naomi Ackie) as their relationship progresses from domestic bliss to personal challenges and beyond. Fans will remember Denise from previous seasons, but a lot has changed since she last visited, and the same can be said for “Master of None.”

Anyone who missed out on the marketing campaign may be taken aback by the shift in focus. After all, when Aziz Ansari’s Emmy-winning Netflix series last aired, Ansari was still front and center as Dev, the curious actor, foodie, and romantic. Now, Dev only pops in for a few short visits, and Ansari is behind the camera on every episode, directing solo and co-writing with Waithe. The haute visual aesthetic and casual, sporadically amusing conversations remain, though both have also progressed along with the show’s core artistic ambition — to gain insight into romantic relationships through patient observance, empathetic character-building, and modern attitudes toward coupling up. But in Season 3, fewer subjects result in fewer revelations. “Master of None” offers an engaging and honest look at its central couple, but their story’s emotional bedrock proves too familiar to justify the season’s narrowed approach.

For one thing, Ansari and Waithe owe quite a bit to Ingmar Bergman’s 1973 miniseries, “Scenes from a Marriage” (which has to be intentional, given Ansari’s penchant for European cinema). Season 3 opens in an idyllic cottage — reportedly set in upstate New York, though so remote and old fashioned it could pass for Kate Winslet’s English hideaway in “The Holiday” — where Denise and Alicia have built an enormously envious life. Alicia works at an antique shop while preparing to get into interior design. Denise is a New York Times bestselling author, struggling under the high expectations set for her second novel. The two enjoy an easy, open back-and-forth, whether they’re dancing in the laundry room or playfully sharing an interview that was originally set up for just Denise.

Trouble arrives with Dev, as Ansari’s former lead stops by with his girlfriend for an in-house double date. (To preserve any spoilers considering how we last left Dev, said girlfriend will remain unnamed.) Despite good food and supportive friends, old arguments surface, tension mounts, and the evening is later summed by Denise in a kind of expositional stupor: “It’s crazy ’cause the night started out so great, then it got a little weird, then it got super awkward, then it was just sad. But me and Dev had a good heart-to-heart, though.”

As Alicia fears at the time, one embittered romance spreads like a contagion, and the happy homeowners soon have their own issues to deal with. Alicia wants a baby, but Denise prefers to wait until things settle down with her career. The resulting choices lead to plenty of what-ifs down the line that become intriguing, if familiar, foundational questions for the audience, but what Season 3 explores most of all is regret. Just as Dev says he longs for the good ol’ days of hanging out with Denise in New York, getting tacos and wandering the city, Denise and Alicia are pushed to think about what they give up by going after what they want. Life, like relationships, is filled with compromise, and the points on which you hold your ground can end up defining where you end up. 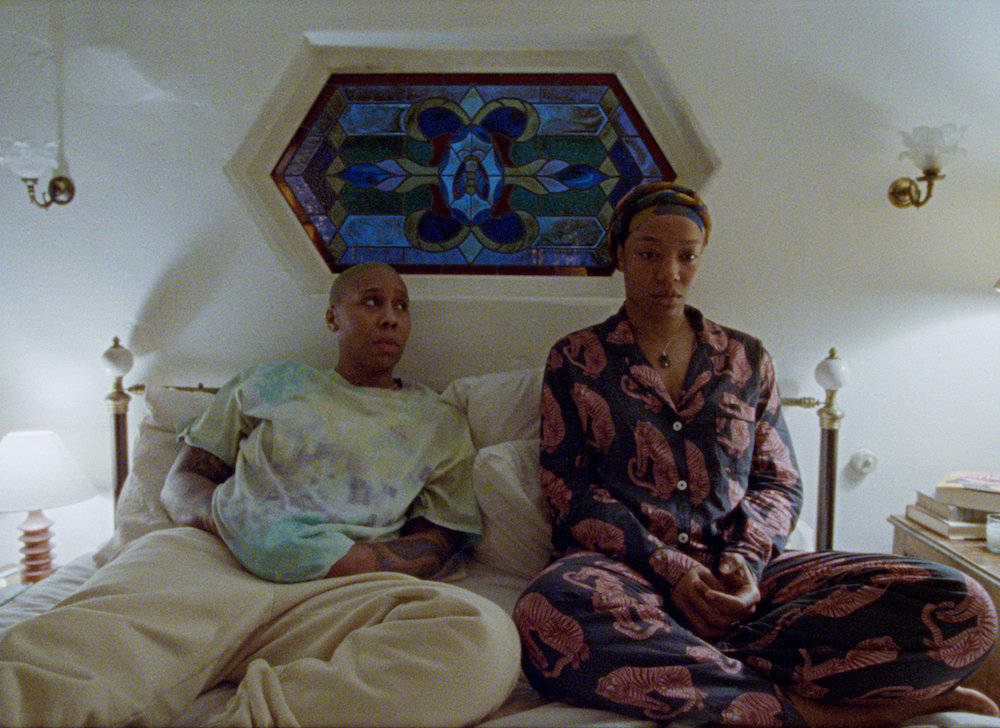 Lena Waithe and Naomi Ackie in “Master of None”

In pushing its characters into these dilemmas, “Master of None” skews too far from its fly-on-the-wall authenticity. Ackie is a stand-out. Her chemistry with Waithe is excellent, as the two create clear-cut individual identities that feel like a good fit together even when you can see where their edges might prove incompatible. Ansari’s static camera, real film, and square frames emphasize the natural tone, as long, uncut takes allow the actors to walk in and out of sight.

But the scripts let them down at critical junctures, failing to clarify issues that drive the plot forward in ways where “Master of None” typically excels. Previous seasons matched complicated progression in relationships with frank discussions with friends or equally muddied indecision, allowing the audience to either clearly understand what’s gone wrong or accept that there’s not always an easy answer. Too often in Season 3, Denise and Alicia land somewhere in between. Eventually, the story gets these two where they need to go, ending on an unanswerable question that should feel familiar to anyone who’s been part of a few long-term partnerships, but “Moments in Love” isn’t substantial enough as a standalone or clearly designed to go further.

What originally helped make “Master of None” so fresh and exciting was its infectious curiosity. Ansari and co-creator Alan Yang would bounce between topics and subjects between and within episodes, creating an array of perspectives all housed within one clever series. This is the show that tackled type-casting Indian actors, turned Nashville’s white BBQ sauce into an urban legend, and made Shoukath Ansari such a star that, four years after his last appearance, the mere mention of Dev’s dad still creates giddy anticipation. (Mr. Ansari does not appear in Season 3.)

To follow one couple for a half-season (or a full season, since five episodes are all we’re getting) is an admirable idea for these young filmmakers with old souls. (Ansari is only 38, Yang 37, and Waithe 36, with the former two sporting the patience and film taste of octogenarians.) But Season 3 tries to forge new ground and ends up on a familiar path instead. It’s a de-evolution of the series’ wide-ranging ethos, trading dozens of unexpected moments in order to refashion just one.

“Master of None” Season 3, “Moments in Love,” premieres Friday, May 23 on Netflix.