Malia White was smirking, laughing, and smiling during the Below Deck Mediterranean reunion, and fans wasted no time criticizing her.

Fans are not Team Malia at all and her actions at the Below Deck Med Season 5 reunion did little to sway opinions. Malia has been under fire a lot during Season 5 for her whinny behavior and continuously running to Captain Sandy Yawn.

The bosun is now speaking out after the fan backlash was once again at an all-time high against Malia. Her reactions at the reunion were one hot topic on social media.

Why was Malia laughing or smirking during serious moments?

Twitter was buzzing in the days following the virtual chat with memes and comments regarding Malia. She spent a good portion of the reunion laughing and smirking while certain cast members, like Hannah Ferrier and chef Kiko Lorran, spoke.

Several social media users blasted Malia for being disrespectful. There were also comments expressing disgust, dislike, and pure hatred for the bosun.

Malia must have read all the fan criticism ad backlash because she took to Instagram Stories to set the record straight.

“PSA: I wasn’t laughing at anyone during the reunion,” Malia wrote. “Deck crew had a lot of behind the scenes group chats & drinking games taking place for some fun! While Andy was addressing someone directly, we were having a little fun in the background! The way it comes across on camera is obviously different to the reality of it.” 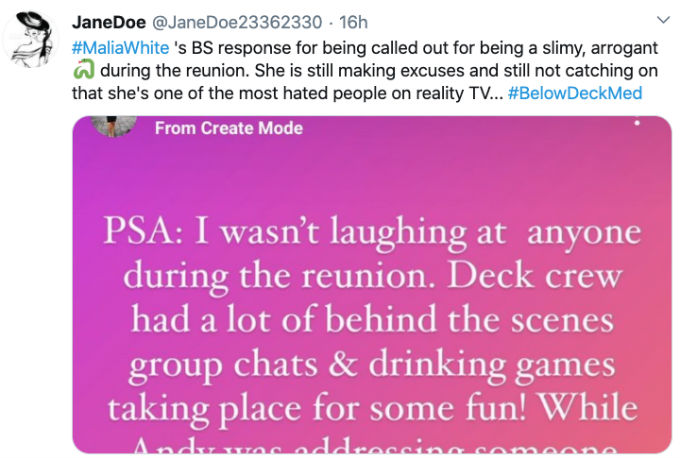 Basically, Malia says she, Alex Radcliffe, and Robert Westergaard were just having a little group chat fun. Yet, neither Rob nor Alex were seen acting the way Malia did on-screen.

No redemption for Malia

The reunion has done nothing to redeem Malia in fans’ eyes so far. Based on the preview for the second part, it won’t either.

Fans are angry at Malia for the way she acted as the first female bosun. Instead of being an example of empowering women, Malia was nothing more than a mean girl who cried to get what she wanted from the captain.

Malia’s superior attitude and entitlement brought fans’ wrath down on her, especially those who love chef Kiko and Hannah.

Now her reason for laughing at others during the Season 5 reunion once again has Malia under fire. Twitter is convinced she is nothing more than a manipulative liar.

The season may be over, but the Below Deck Mediterranean drama is still going strong. Part one of the reunion gave fans a glimpse of what is to come. In true fashion, Bravo is saving the best for the last.