Like so many television series across the globe, Line of Duty has fallen victim to a number of delays and complications as a result of the coronavirus pandemic. And with showrunner Jed Mercurio recently revealing he wants production completed by Christmas in order to air in 2021, updates on the new series are being widely sought after by fans. DS Steve Arnott star Martin Compston shed some new light on the BBC drama this evening – including his thoughts on the major changes the series may face.

The One Show’s Alex Jones was keen to find out more about the drama ahead of the first series’ rerun on BBC One tonight.

Alex posed the possibility of a 2020 finish to Martin, before asking: “Do you think ‘A’, that that’s possible,

“And ‘B’, do you think they’re going to have to rewrite bits of it because obviously, you know, of the current situation?”

The Line of Duty star jokingly replied: “Well, I’m kind of torn because as you can see, I’m in dire need of a haircut. 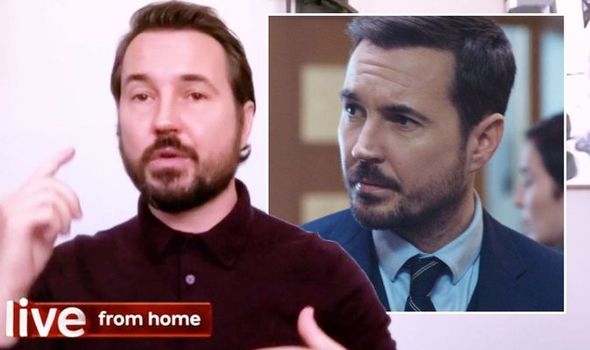 “I’ve also got a few lockdown pounds I need to lose before I get back.”

Martin then turned more serious as he revealed there is a date the cast and crew are aiming for.

He continued: “It’s one of those ones. We’ve got a definite date that we’re working towards,

“But there’s no point announcing it because the situation’s so fluid and it can change daily, you know. Hopefully, we can get it done before Christmas.”

The DS Arnott star then weighed in with whether he thought the series’ scripts would face any alterations.

“I think there will be changes,” Martin said. “I mean, there’s gonna be massive changes off-camera,

“As in the protocols and social distancing and how many people can be on set and congregating, obviousluy people off-camera will be in masks or not.

“In terms of changes (to the script), I think if there are changes which are possible as in like moving scenes which were indoors outdoors where possible, but we really wouldn’t want to compromise the scripts.”