Leon Gast, a filmmaker whose 22-year quest to make “When We Were Kings,” a documentary about Muhammad Ali and George Foreman’s epic 1974 boxing match, involved a Liberian shell company, the Hells Angels, a drug deal gone bad, the singer Wyclef Jean and ultimately an Academy Award, died on Monday at his home in Woodstock, N.Y. He was 84.

His wife, Geri Spolan-Gast, said the cause was complications of Alzheimer’s disease.

Mr. Gast was a young filmmaker who had already directed one major documentary, about New York’s Latin music scene, when he learned in 1974 of a plan by the boxing promoter Don King to stage a combination music festival and boxing match in Kinshasa, the capital of Zaire (today the Democratic Republic of Congo).

A company in London had agreed to pay for the dozens of performers at the festival, including James Brown, Miriam Makeba and B.B. King, while Mobutu Sese Seko, the president of Zaire, put up $10 million to split between the boxers in the fight’s main event, Foreman and Ali.

Mr. Gast, who had boxed in high school, lugged his projector to Mr. King’s offices in Rockefeller Center, where he lobbied for the job of making a film about the music festival, with clips of the fight interspersed. Mr. King wanted a Black director, but he liked Mr. Gast’s work, and he hired Mr. Gast after he agreed to hire Black crew members. 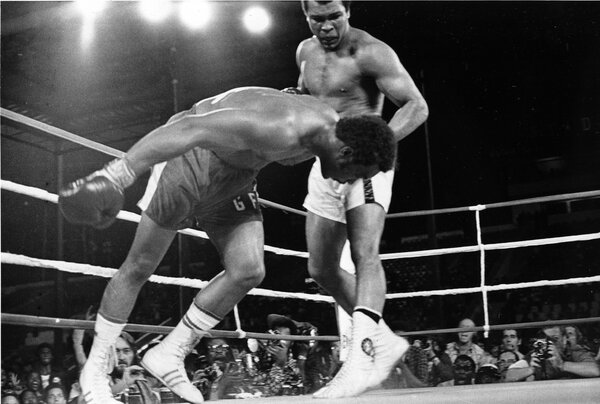 The fight, billed as the “Rumble in the Jungle,” was to take place on Sept. 25, 1974, preceded by the three-day music festival. But on Sept. 17, Foreman cut his forehead while sparring; he needed 11 stitches, and the fight was pushed back six weeks.

Many of the boxing fans and reporters who had traveled to Zaire left, but Mr. Gast decided to stick around. He had a sense of the drama unfolding: Ali was 32 years old, considered over the hill for a boxer and certainly no match for Foreman, 25, the reigning heavyweight champion of the world, whose 40-0 record included 37 knockouts.

“The time may have come to say goodbye to Muhammad Ali,” one of his admirers, the sportscaster Howard Cosell, said on television, “because very honestly I do not think he can beat George Foreman.”

But Ali was unfazed. While Foreman — who at the time was reserved to the point of surliness — refused to be interviewed, Ali opened up to Mr. Gast, who over the next several weeks recorded hours and hours of the former heavyweight champion exercising, sparring, meeting locals and indulging in his famed verbal virtuosity.

“If you thought the world was surprised when Nixon resigned, wait until I kick Foreman’s behind,” Ali said at one point; another time, he said: “Only last week, I murdered a rock. Injured a stone. Hospitalized a brick. I’m so mean, I make medicine sick!”

He even suggested when and how Mr. Gast’s crew should film him.

“One day Muhammad told us: ‘In the morning when I run, I come around that corner with the sun and the river behind me,’” Mr. Gast told The New York Times in 1997. “‘Put your camera over there. It’ll be a great shot.’ He was right. It was a great shot.”

Foreman was favored to win by 4-to-1 odds, but Mr. Gast had faith in his newfound friend. He bet the writer Hunter S. Thompson $100, at 3 to 1, that Ali would prevail.

The fight finally took place on Oct. 30 — at 4 a.m., to accommodate audiences watching it in theaters in the United States — under a giant poster of Mr. Sese Seko. Ali had bragged for weeks about how he was going to “dance” around the ring to avoid Foreman’s powerful fists. But instead he leaned back against the ropes, absorbing blows until Foreman wore out, after which Ali delivered a knockout punch. Ali called it his “rope-a-dope” strategy, and it stunned the estimated one billion people watching around the world.

Back in New York to assemble the film, Mr. Gast immediately ran into problems. Ticket sales from the music festival were supposed to have paid his production costs, but after the fight was delayed, Mr. Sese Seko had declared it free as a way to drum up attendance.

Mr. Gast couldn’t even get ahold of the 300,000 feet of footage he had shot. The London-based company that Mr. King said would bankroll the project turned out to be a cover for a shell company based in the Cayman Islands and owned by Stephen Tolbert, the Liberian minister of finance. Mr. Gast flew to Liberia to arrange for more money, but before they could make a deal, Mr. Tolbert died in a plane crash.

Mr. Gast’s lawyer, David Sonenberg, sued in a British court, and after a year Mr. Gast had his film, plus hours and hours of audio, piled up in the bedrooms and hallways of his apartment on the Upper West Side of Manhattan.

What he did not have was money, and so he took on a series of side projects. At one point the Hells Angels hired him to make a film that would counter their reputation as violent criminals — though they undercut their own case when several of them beat up Mr. Gast (without seriously injuring him) for refusing to give them editorial control. (The film, “Hells Angels Forever,” was widely panned.)

Not all of Mr. Gast’s moneymaking efforts were film-related, or legal. One night in June 1979 he and at least four other men were waiting by an airport near Charleston, W.Va., for a plane carrying some 10 tons of marijuana, which they were smuggling from Colombia. But the aircraft crashed on landing, spilling its contents down a hillside. Mr. Gast was arrested, pleaded guilty and received a $10,000 fine and five years’ probation.

In 1989, after years of struggling, Mr. Gast reconnected with Mr. Sonenberg, who had since become a successful music manager. Mr. Gast persuaded him to underwrite the rest of the production process, and even to let him use a room in his Manhattan townhouse as a studio.

Mr. Gast was still intent on centering the film on the festival. But one day one of Mr. Sonenberg’s clients, the hip-hop star Wyclef Jean, was in the studio when Mr. Gast was editing a clip of Ali. Mr. Jean was enraptured, and asked to see more and more of the footage.

Mr. Sonenberg and Mr. Gast decided to re-edit the film, this time focusing on the fighters, with the music festival as the background. They brought in the director Taylor Hackford, who helped edit the film and conducted interviews with Spike Lee, George Plimpton and Norman Mailer (the last two had covered the fight as reporters).

Mr. Sonenberg suggested calling the film “When We Were Kings” as a nostalgic reference to the musical and sports royalty who gathered for the event. He even got Mr. Jean and his group, the Fugees, to provide music.

In 1996, Mr. Gast and Mr. Sonenberg took it to the Sundance Film Festival, where they received a special jury citation and 17 distribution offers. Critics praised the film, which nearly swept the awards for documentary films that season — including, in early 1997, the Academy Award for best documentary feature.

At the Oscar ceremony, Ali, who by then had developed Parkinson’s disease, rose from his seat to join Mr. Gast and Mr. Sonenberg in accepting the award. Foreman, his former nemesis, came up behind him. When Ali had trouble mounting the stage, Foreman took his arm and helped him up.

Leon played basketball at Seton Hall University and then transferred to Columbia, where he studied film and photography but left without a degree.

He found a job at an advertising agency as a still photographer, and his work appeared in Vogue and Esquire. When his company opened a film division, he transferred to making commercials — his first was for Preparation H.

Mr. Gast moved away from advertising in the late 1960s as he began to get work in the music industry, designing album covers and making short films. In 1972 he directed “Our Latin Thing,” a cinéma vérité profile of performers like Willie Colón, Jose Feliciano and Johnny Pacheco. Five years later he released “The Grateful Dead Movie,” a concert film co-directed with the band’s lead guitarist, Jerry Garcia.

In 1991 Mr. Gast married Geri Spolan, who survives him, along with two sons from a previous marriage, Daniel and Clifford; a stepdaughter, Sara Marricco; and six grandchildren.

After “When We Were Kings,” he made two more major documentaries: “Smash His Camera” (2010), about the celebrity photographer Ron Galella, and “Manny” (2015), about the boxer Manny Pacquiao, which Mr. Gast directed with Ryan Moore.

Mr. Gast and his wife moved to Woodstock in 2005 and became involved in the Woodstock Film Festival. In 2018 he presented a cut of his latest project, a film about the history of the town.

Despite his nearly 60 years in film, Mr. Gast’s career, and most likely his legacy, remain bound to the loquacious boxer he followed around Zaire in 1974 — a fact that he did not seem to regret.