When Elliot Stabler (Christopher Meloni) left the world of Manhattan’s Special Victims Unit in 2011 it was a gut-punch to long-term fans of the “Law & Order” franchise. How could he leave without saying goodbye to his partner and best friend, Det. Olivia Benson (Mariska Hargitay)? It wasn’t until last week, in anticipation of Meloni’s return to NBC with his spin-off series “Law & Order: Organized Crime,” that we got some answers — but the concept of “Stabler coming home” also caused us to look at Stabler’s 12-year checkered career as a cop.

Stabler’s homecoming was started off with his return to “SVU.” In the wake of an attack on his wife, Stabler convinces Benson to let him interrogate a possible suspect. Despite Benson’s misgivings — she knows he isn’t exactly the coolest cucumber — she allows him a brief moment with the suspect. Stabler holds it together until the suspect critiques his wife’s condition and Old Stabler returns, moving to attack the guy until Benson holds him off.

In a conversation with Benson’s Deputy Chief, Christian Garland (Demore Barnes), the two discuss how inappropriate it was for Stabler to be in the room. This opens up a discussion with regards to Stabler’s tactics, which plays as a way for the series to kinda sorta discuss Stabler’s history of excessive force, manipulation, oh, and the shooting of six people. Benson and Fin (Ice T) bring up how times have changed; things were “different” back when Stabler was on the team; and that he was a “good cop” who did get results.

As someone who never passes up an “SVU” marathon, I know Stabler is a divisive figure. Meloni’s acting talent and charm keeps the character from being a complete monster, but it’s hard not to hear that “things were different then” and believe we’re talking about the same character. Stabler didn’t necessarily go through much personal or professional growth over his 12 seasons. Benson dealt with being the product of rape, the death of her mother, meeting her half-brother, and almost getting raped herself; Fin endured numerous episodes involving racism and had to deal with (kinda) his homophobia towards his son; even Munch eventually progressed from conspiracy theorist to the crotchety chief of SVU.

Stabler’s biggest problems tended to involve his family, whether that be his daughter’s mental illness, and “will they or won’t they” discussions of divorce with his wife. And if the first episode of “Organized Crime” is anything to go off of, Stabler’s quest to avenge his dead wife again puts him in the middle of a personal narrative writ large. So without much personal development, it’s a bit laughable hearing Benson and Fin blame Stabler’s tactics on the times, as opposed to anything involving him as a person.

It’s the equivalent of saying Stabler’s not problematic because everyone was. Never mind that Stabler’s stories saw him not believing rape victims, slamming perps against walls, and reminding Olivia that she “didn’t understand” certain situations because she wasn’t a mother. 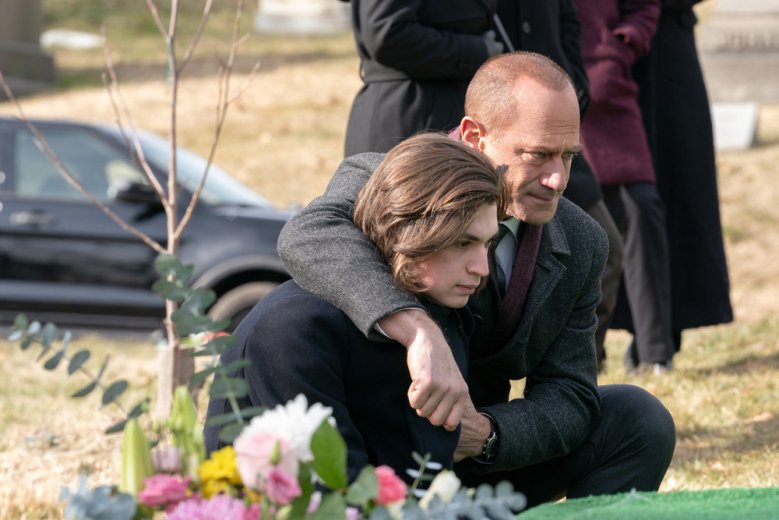 Stabler shot six people over the length of his career. Two of those were outright deaths, one involving white supremacists and another a young woman who brought a gun into the station house. But as with most “SVU” situations — and what we’re now seeing in “Organized Crime” — Stabler’s crimes are presented as okay because of how terrible the other characters are in comparison.

It’s hard not to sympathize with Stabler when the opposite side is rapists and murderers. But that last moment of gun violence — the one that forced Stabler to leave SVU — involved a young girl traumatized over losing her mother. So maybe it’s worth some introspection on Stabler’s part?

Maybe “Organized Crime” will take the time to look at Stabler’s career as a whole. Unfortunately, based on the pilot, this looks to be another story of a bad cop dealing with a world turned upside down, where social justice warriors and red tape prohibit him from getting the perp, dammit. Is Elliot Stabler doomed to be the old grandpa of cops who continually reminds everyone how good things were back when you could emotionally manipulate a suspect or just throw them around to get a confession?

The series has to reconcile that because we, as a country, are already trying to do that work. If “Organized Crime” doesn’t want to look immediately passé, it needs to acknowledge that Stabler was a cop who did bad things.