We’re only four episodes into Season 15 of The Real Housewives of New Jersey, but Kelly Dodd is already looking forward to the reunion.

And it seems she wants to have a faceoff with co-star Braunwyn Windham-Burke!

Kelly, who is no stranger to controversy, recently posted a comment on social media bashing Braunwyn.

Kelly lashed out due to constant criticisms about her travelling during the COVID-19 pandemic and leaving her daughter at home.

However, the 45-year-old is noting the hypocrisy between the backlash she receives compared to how Braunwyn is treated.

Kelly shared with fans that Braunwyn has travelled to multiple locations over the past few months while leaving her kids with nannies.

Braunwyn Windham-Burke recently sat down for an interview with Entertainment Tonight.

And during the chat, the Real Housewives of Orange County alum was asked about her co-star Kelly Dodd.

“The fact that she didn’t take COVID seriously, I didn’t understand that,” shared the 42-year-old about her castmate.

She added, “Leaving your daughter during a global pandemic was weird to me, I can’t imagine that. But the main thing for me was when we really  got into it over Black Lives Matter.”

Once Kelly caught wind of the interview she called Braunwyn’s response, “Hypocrisy at its highest level.”

And as you know, the newly married Mrs. Leventhal isn’t one to hold her tongue.

Kelly is gunning for Braunwyn at the RHOC reunion

Kelly spouted off a lengthy comment in response to Braunwyn’s allegations during her ET interview.

She denied the claims about her teenage daughter Jolie during the COVID-19 pandemic saying, “I never abandoned my daughter during COVID. She was with her grandmother and father when I was stuck in NYC.”

The five-season alum also shared that Braunwyn was the one who actually travelled to “Puerto Rico, Aspen, Salt Lake City and elsewhere without her kids, who spent and continue to spend considerable time with nannies.”

Before ending the long message, Kelly made it known that all will be revealed at the Season 15 reunion, adding, “Poor Braunwyn will be eaten alive.” 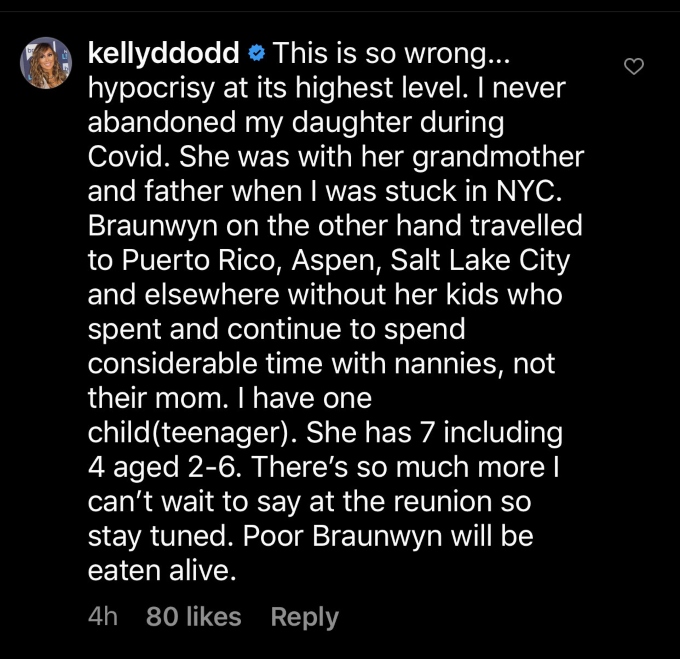 Kelly’s new husband Rick Leventhal also had a few words for Windham-Burke, sharing his own comment on the video.

The Fox News reporter posted a quote by Daniel Wallace about liars, and sid Braunwyn, “Should’ve quit while she was ahead.”

Whose side are you on, Braunwyn Windham-Burke or Kelly Dodd?

The Real Housewives of Orange County airs Wednesdays at 9/8c on Bravo.