It looks like Josh Seiter and Yolanda Leak have called it quits.

The couple created plenty of chatter when they announced that they were dating earlier this year and more recently announced their engagement.

Many fans were concerned about just how fast the relationship was moving. Josh even went so far as to have Yolanda’s name tattooed on his arm.

Now, it seems his relationship with the 90 Day Fiance: Before the 90 Days alum has ended just as quickly as it began.

Taking to his Instagram page, Josh confirmed his split from Yolanda in a lengthy post that contained two snaps of a message to his followers.

“Let’s be honest folks. I had grown to love someone I only knew through social media and FaceTime. Oftentimes the person presented on social media isn’t the same one behind closed doors. I gave my energy, my time, & my heart to this woman but I couldn’t shake the feeling something wasn’t right,” he began the post.

Josh continued to explain that Yolanda allegedly asked him for money, but that he hadn’t given her a cent.

“This feeling only increased after being asked to send money to help with phone bills, rent, & growing number of other things that seemed to multiply as the weeks went on. I’m grateful the only thing I sent was a ring, which I discovered was sold soon after,” he continued. 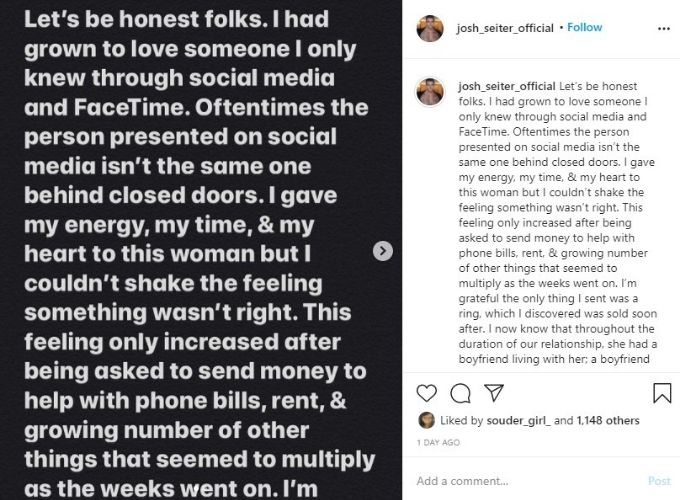 To make matters worse, Josh claimed that Yolanda already had a live-in boyfriend when the two began dating and that the pair were in cahoots in their attempts to get money from him.

“I now know that throughout the duration of our relationship, she had a boyfriend living with her; a boyfriend that was working with her behind the scenes to try and get money out of me. It’s hard to reconcile the seemingly funny, sincere person I thought I was talking to with the cunning, calculating person behind the mask. I’ve always been up front about who I am. But not everyone is built the same,” he concluded the post.

Fans still don’t buy that the relationship was real

Josh’s followers were quick to comment on the post stating that they knew the relationship wouldn’t last.

“and this is why I didn’t believe that relationship was real,” said one comment.

“I mean anyone saw this coming. You had a ring, a tattoo but you never saw her? Seems like you played yourself,” wrote another follower.

Another follower called him out for clout chasing.

“And here’s the clout I knew this was all about lol who would actually get engaged when never meeting,” they wrote.

Josh then shot back in his own defense, stating, “We met in Vegas and exchanged numbers but I got to know her almost exclusively via FaceTime and social media. Please stop trying to play super-detective and ‘gotchya’. You’re reading way too literally into the word ‘know.’”

As for Yolanda Leak, the 90 Day Fiance: Before the 90 Days personality hasn’t publically commented on the split, but they have unfollowed each other on social media.

90 Day Fiance: Before the 90 Days is currently on hiatus at TLC.