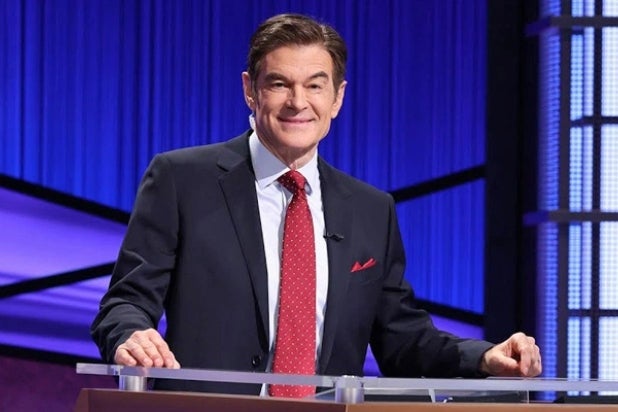 “Jeopardy!” fell another 2% in Dr. Oz’s first week as guest host, with the Sony game show posting its lowest numbers since the New Year’s holiday break.

“Jeopardy!” finished with a 5.2 household rating, while “Family Feud” led its second week in a row with a 5.4 rating, for the week ending March 28. It should be noted that the syndication faced heavy preemptions due to CBS’ coverage of the NCAA Men’s Basketball Tournament.

The 5.2 rating is the lowest for “Jeopardy!” since the week ending Jan. 3, which was right before Alex Trebek’s final week. The final episodes for the longtime host, who died in November following a battle with pancreatic cancer, hit season highs in early January. The show pulled in a 6.6 rating across his farewell week, with his final episode on Jan. 8 drawing 14 million viewers, more than any episode in over a year.

Since then, the show has had a rotating cast of guest hosts. Ken Jennings was first up and drew a 6.2 rating in his first week. In Week 2, he had a 5.9 rating. Jennings holds the “Jeopardy!” records for wins and cash prizes. He also won the show’s “Greatest of All Time” tournament.

Jennings was followed by executive producer Mike Richards, who was succeeded by Katie Couric. In her second week, “Jeopardy!” fell behind “Family Feud” to finish second for the first time since Trebek’s last episodes. Dr. Oz concluded his run last Friday (most were not fans he got the gig at all). Green Bay Packers quarterback Aaron Rodgers began his guest hosting run last night.

Also for the week ending March 28, “Live With Kelly and Ryan” led the talk shows with a 1.8 rating and “Judge Judy was comfortably ahead of the courtroom shows with a 4.9 rating.