Jenelle Evans came to her husband David Eason’s defense when a fan criticized him for not working to provide for his family.

The follower wrote, “A man is supposed to be a provider, Idc what this generation think.”

Jenelle responded to the fan and said, “Not when you are an influencer and make more. I don’t mind at all as long as he helps with the family and he does so much it’s insane.”

While David supposedly worked as a pipe-welder in the past, fans watched as David remained unemployed during much of his time on Teen Mom 2.

At one point, Jenelle said David wasn’t working because he was homeschooling one of his children.

Regardless of his lack of employment, Jenelle continued to stick by his side and came to his defense, something she has done several times since their relationship first began. 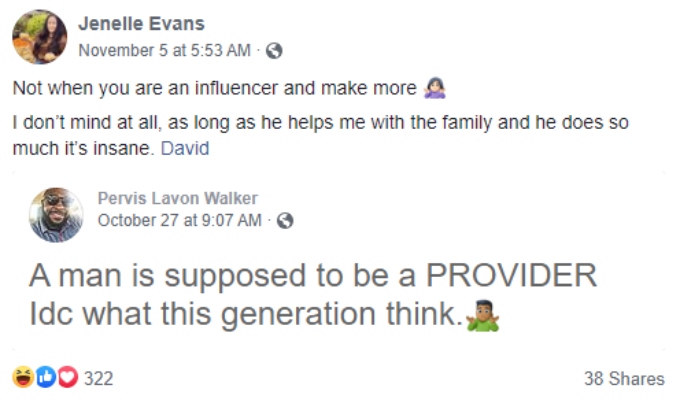 Jenelle and David’s rocky past

Jenelle spoke highly of her husband despite leaving him last October when she filed a protective order against him to protect herself and her children.

Shortly after, the couple sought out counseling to cooperatively co-parent but ended up making amends.

It didn’t take long for trouble to find its way back to them, though, as David was arrested and faced felony assault charges for pistol-whipping one of Jenelle’s friends when he came with her to pick up some of her belongings from their home.

Jenelle eventually made up with David again following the incident.

Jenelle fired from Teen Mom because of David

Jenelle is extremely loyal to David and continued to stay by his side through all of his mistakes, even when that mistake got her fired from the Teen Mom franchise.

MTV chose to cut ties with the star after David shot and killed their family dog.

They released an official statement that read, “MTV ended its relationship with David Eason over a year ago in February 2018 and has not filmed any new episodes of Teen Mom 2 with him since.  Additionally, we have stopped filming with Jenelle Eason as of April 6, 2019, and have no plans to cover her story in the upcoming season.”

David supposedly shot the dog after it bit their daughter, Ensley.

David defended his actions in an interview with People and said, “It was a situation where my daughter, her health, her safety was in danger…when a dog bites a child on the face more than one time, then it should never be around the child again.”

Since exiting Teen Mom 2, Jenelle started her own makeup line called JE Cosmetics, which was released this past Fall.

It’s unclear how successful her launch has been, but based on her recent defense of David’s unemployed, it appears Jenelle is not worried about their ability to support their family.