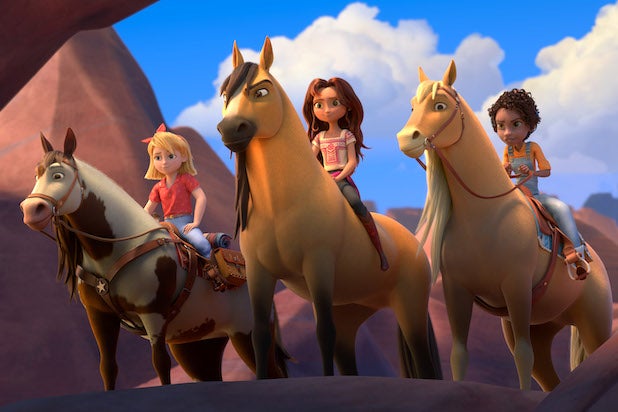 “Spirit Untamed” is the follow-up to the 2002 Oscar-nominated “Spirit: Stallion of Cimarron.” And rounding out the voice cast are Marsai Martin, Mckenna Grace, Andre Braugher, Walton Goggins and Eiza González.

Elaine Bogan directs the film, which is an epic adventure about a headstrong girl longing for a place to belong who discovers a kindred spirit when her life intersects with a wild horse.

Karen Foster is the producer, and the film’s co-director is Ennio Torresan. The original score is by composer and Universal Composers Initiative alum Amie Doherty.

Merced, who broke out as the live-action Dora the Explorer in “Dora and the Lost City of Gold,” will play the lead role of Lucky Prescott, while Gonzalez plays her mother, a horse trainer and stunt performer, and Gyllenhaal plays her father.

“Spirit Untamed” comes from DreamWorks and will be released by Universal on June 4.

The original “Spirit” made $122 million worldwide and also became an Emmy-nominated TV series.

The trailer for “Spirit Untamed” is also set to Taylor Swift’s “Wildest Dreams,” but specifically the new version of Swift’s track that she recently re-recorded. You can check out a teaser for the film via Swift’s Instagram story.