“Ticket to Paradise” and other team-ups take advantage of their onscreen glamour and stellar chemistry and their offscreen affection for one another. 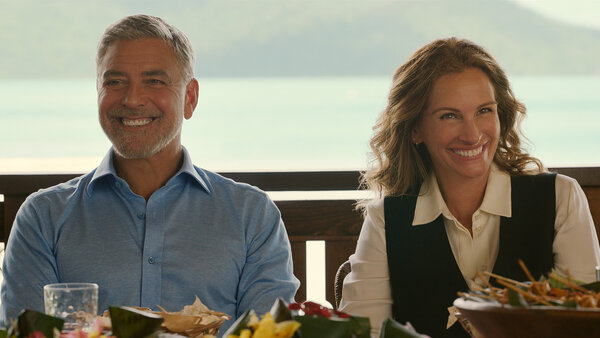 They don’t share the screen until 49 minutes into their first film together, and it’s not an amicable conversation. She’s expecting her boyfriend, but the hand on her shoulder belongs to her ex-husband, and her first words to him (“What are you doing here?”) are loaded with a mixture of shock and residual anger. The irritation quickly takes over; there’s fire in her eyes, enough to dampen the twinkle in his. “You’re not wearing your ring,” he notes.

“My last day inside,” he replies.

Julia Roberts and George Clooney’s first scene together, in Steven Soderbergh’s 2001 remake of “Ocean’s Eleven,” runs less than five minutes total, but they’re packed with barbs and pronouncements, insults and callbacks, relitigations of ancient arguments and (for him at least) flashes of longing. Tess (Roberts) is the reason Danny Ocean (Clooney) has assembled the titular crew to rob three high-profile Las Vegas casinos — all of which happen to be owned by Terry Benedict (Andy Garcia), Tess’s current beau. (When Danny meets Terry, he fidgets with his wedding ring absent-mindedly. Or perhaps deliberately.) The payday is huge, but it’s incidental to Danny; as he tells her during that strained first conversation, “I came here for you.” So Danny and Tess, and thus Clooney and Roberts, have to generate enough heat and chemistry underneath the snippy surface to justify everything else in the movie. It’s a tall order. They pull it off without breaking a sweat.

“Our scenes are really fun,” Clooney explained at the time, “because they’re like an old Howard Hawks film where they’re both going at each other and nobody wins. Which is the way it should be.” Roberts concurred: “The dialogue is so sharp and exacting, it’s like a 1940s movie.”

Such callbacks to old Hollywood were no accident. For years now, Clooney has been described as one of the last movie stars of the old-school mold. As GQ’s Tom Carson put it in 2007, “He’s shrewd, he’s virile, he’s merry, and the camera loves him with the devotion of a headwaiter rushing over to light a billionaire’s cigar.”

Roberts, with her million-dollar smile, gin-soaked voice and flowing mane of auburn hair, carries similar connotations of the do-it-all stars of the studio system. The writer-director Richard Curtis told Vanity Fair that he based her role in “Notting Hill” on Grace Kelly and Audrey Hepburn, “neither of whom were available.” That Roberts could fill those very large shoes speaks to the potency of her throwback charm.