On Friday, April 3, Apple TV+ releases all 10 episodes of the first season of its mystery-thriller “Home Before Dark.” Inspired by the life of Hilde Lysiak, a young journalist who gained national notoriety at age nine when she scooped a local homicide case in her Pennsylvania hometown, the Jon M. Chu-directed and executive produced series has already been renewed for a second season.

Created and executive produced by Dana Fox and Dara Resnick, “Home Before Dark” follows Brooklynn Prince as Hilde Lysko, a nine-year-old journalist whose family’s cross-country move from New York to her father’s (Jim Sturgess) small Washington hometown leads her to investigate a dark, deeply buried mystery from decades ago.

IndieWire spoke with “Home Before Dark” co-showrunner and co-creator Dana Fox about the series, from the process of making a bingeable mystery-thriller she hadn’t seen before to her transition from comedy to drama to the unexpected “Justified” reunion.

This interview has been edited and condensed for length and clarity. 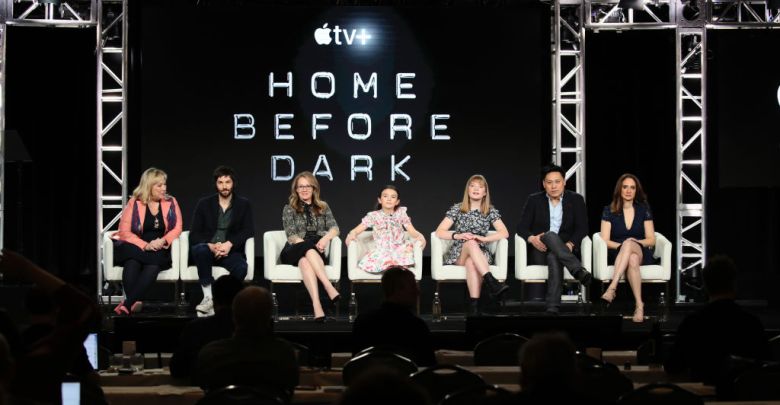 Fox: Basically, my dear friend Joy Gorman Wettels, who’s an amazing producer — she was my manager for a long time and then she started producing, as well — she was at the Tribeca Awards, and there were a bunch of adults winning awards for cool things. And then, this little nine-year-old girl stood up and gave this incredible speech and was incredibly poised. She started talking about the need for journalists and how important it was to try to find the truth, and it really resonated with Joy. We weren’t even deeply in the times that we are in now, but it’s something that was feeling important already.

And so Joy was talking to the people next to her about how extraordinary this little girl was, and it turned out to be Hilde’s parents. So she joked, “I have a five-year-old, can you come move in with me, and help me raise my daughter, because this girl is amazing.” And so they struck up a conversation, they got along, and eventually, Hilde was featured in the New York Times for essentially scooping her local paper on a murder.

Joy was in a very competitive situation with a lot of other producers and they were all talking to Hilde and her parents on the phone and they had all these conversations. Joy ended up winning the rights and when she did, afterwards she said, “Why did you pick me?” And Hilde’s parents said, “Because you are the only person that spoke directly to Hilde.”

These people are not very interested in becoming famous, they don’t care about any of that stuff. They just have this little girl who is driven and loves journalism in this way that nobody could fully explain. And they said they wanted to find a partner, find somebody to do this but who trusts Hilde completely, and takes her as seriously as she takes herself. That was Joy.

So Joy said to me, “Do this with me.” And at the time Joy had just finished — but it hadn’t been released yet — “13 Reasons Why.” And she said, “You can do this. This is a thing. Let’s invent something you’ve never seen before.”  Constantly the real Hilde is told to sit down and shut up and she doesn’t know what she’s talking about. And I as an adult woman experience that left right and center. And so it felt really resonant. You know, to have a little girl, it was like, “Nope, not sitting down, not shutting up, I’m going to keep going.” So, to me, that’s the quietly revolutionary act of this TV show. 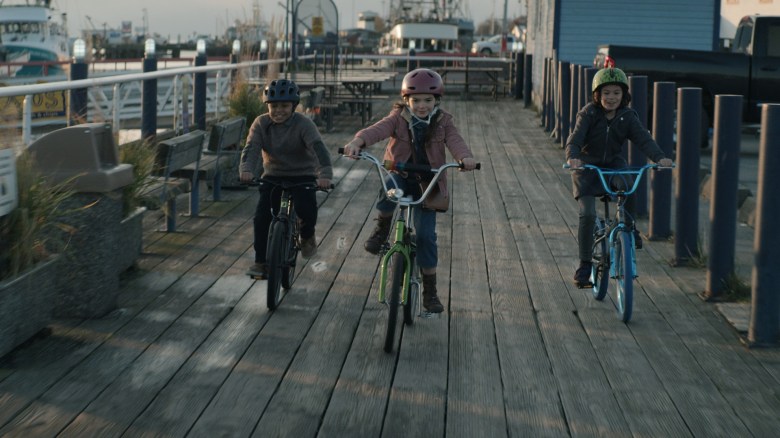 It’s easy to get sucked into that nostalgic viewing here, despite the show taking place in the present. I’ll admit, there were a couple of very specific, very tense moments where I thought, “Maybe this nine-year-old should have a cell phone.” But usually, something like that really sticks out in a show set in the modern era.

Fox: I know, isn’t it funny? We really struggled with that because, if you think about it, cell phones are sort of the bane of storytelling’s existence.

Fox: It’s hard to figure out how in this story, if you’re always in touch with your parents, if your parents always know that you’re okay… It was kind of important to me that Hilde doesn’t have a cell phone, because for some people in America, they don’t believe in giving their kids cell phones at that age or they can’t afford it, you know? And it was important to me that not everyone on the entire show got to have a cell phone. So I made it so that she’s not allowed at this point, and the real Hilde didn’t. When she was nine, she didn’t have a cell phone. But that you’re totally right, at times it’s like, “God, I wish this kid just had a cell phone.”

It makes sense for the story you’ve told though, because especially the way Hilde’s parents are written, they’re the kind of people who’d want their daughter to have these real-world experiences instead of just being on her cell phone all day.

Fox: When I was a kid, there were just those things that were weird to see. And you felt it in your gut, as a kid, and no one was telling you the truth. So we were trying to take that as one of the main themes of the show. I love the feeling of nostalgia, I love the ’80s feeling. But for me personally, I definitely didn’t want to have monsters in the show. I wanted the secrets in the house to be the monsters. As a kid, when you knew there were secrets in your house, you felt like there was a monster in your house. And so I thought, what an amazing thing for this little girl to be the one who is trying to shine a light on stuff.

I thought it was really interesting. Because we talked about how to do stakes in a show with a nine-year-old, where ultimately you don’t want to worry that there’s physical harm ever, because that’s not fun to watch. You kind of want to know that, physically, she’s safe. How do you create real stakes for a show about a nine-year-old when you want to make sure that everybody’s very clear that she will be physically safe? And it’s that she’s shining a light on adult problems that are actually very real, when she doesn’t actually realize how very awful what she’s trying to sort of uncover is. She’s poking the bear and she doesn’t realize it, you know what I mean? 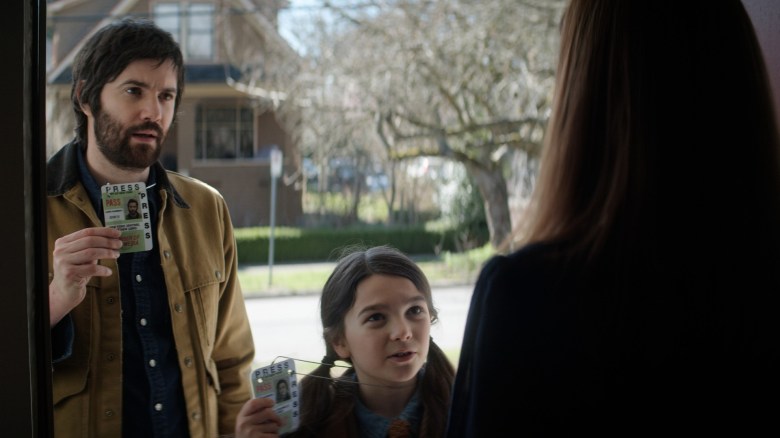 I’d love to know more about working with Brooklynn Prince, because she’s so good but she’s also such a young lead, which I imagine can’t be easy.

Fox: Oh my god, she’s so extraordinary. To me, I think we’re watching the beginning of an incredibly beautiful creator’s journey. I think Brooklynn is going to be a director and a writer and she’s really… You know what I think it is that’s really extraordinary about Brooklynn is — and a lot of the other actors have said this to me about her — that she’s incredibly empathetic. Like, I’ve never met a child who feels anything more deeply and more completely than she does. She has an overwhelming sense of empathy for other people.

And so when she is doing her thing, yes, she is incredibly disciplined and she learns all of her lines and she’s amazingly well-prepared. And her mother who’s incredible, Courtney Prince, helps her with everything. So she’s always prepared and she’s a really good professional actress in that way. She can focus, in that she can be the giggliest, silliest little kid, and then when it gets time to shoot, she just sort of takes a moment and says, “Okay, I’m ready.” And then she just nails it every time.

But what I think is the lightning in the bottle about her is that she’s not acting feeling something, she’s feeling it. She thinks about it all. There were moments on set where she was like, “I just want to make Hilde proud. When I think about how Hilde did this, with all the people making those mean comments about her, it hurts me.” 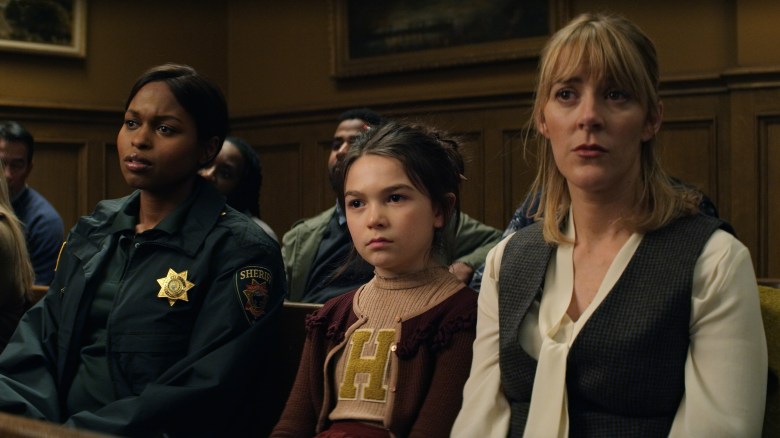 I feel like the IndieWire readers will be disappointed if I don’t ask this question: When it came time for casting, was the “Justified” reunion between Abby Miller and Joelle Carter intended or just a very happy accident?

Fox: Oh my gosh, that is such a good question. You know, I met Joelle through Abby. Oh, it’s so funny. I had never seen “Justified” before, but we had cast Abby and then someone said, “Did you realize that Abby’s friend is actually an amazing actress?” And I was like, “No, I’ve never heard of her before.” And we had this part to fill and then somebody sent me a list of Joelle’s clips from “Justified.” So I watched an entire season of “Justified” just through the Joelle and Abby clips. So from my perspective, “Justified” is amazing. And it’s only about Joelle Carter.

Abby and basically the entire group — the entire cast is like a gigantic family. We’re all madly in love with each other and we laugh, we cry. It’s really beautiful. And for me, it’s just that sometimes that’s all you get in life. It’s just the experience of making the thing. And this one has really been so glorious.