“The Right Girl” was co-written by accuser Louisette Geiss and producer Howard Kagan, with songs by Warren and directed by Broadway veteran Susan Stroman

In a cramped rehearsal studio in Hollywood last February, a group of Harvey Weinstein accusers gathered for the first live run-through of a remarkable by-product of the #MeToo movement: a musical about their experiences that is aiming for Broadway.

The story of a powerful Hollywood mogul brought down by the women he trampled, “The Right Girl” was co-written by Louisette Geiss, one of Weinstein’s accusers, and producer Howard Kagan, with music by Grammy-winning, Oscar-nominated songwriter Diane Warren, and direction and choreography by Tony-winning director Susan Stroman (“The Producers”).

But just days after this first rehearsal with Broadway performers, the coronavirus struck, ending in-person work on the project. Broadway went dark indefinitely and since then the producers have been struggling to find a path forward. The first baby step is finally here, with a Zoom-like filmed performance of the script at a theater in Pittsfield, Massachusetts, on November 1.

“Were it not for the pandemic, we planned for this show to premiere at an off-Broadway or regional theater right about now,” Kagan said. “So, when the world changed in March, we changed course to rehearse and film this live theater performance in a way that kept everyone involved safe and socially distanced, while providing all of us a chance to work in the theater industry we love.” 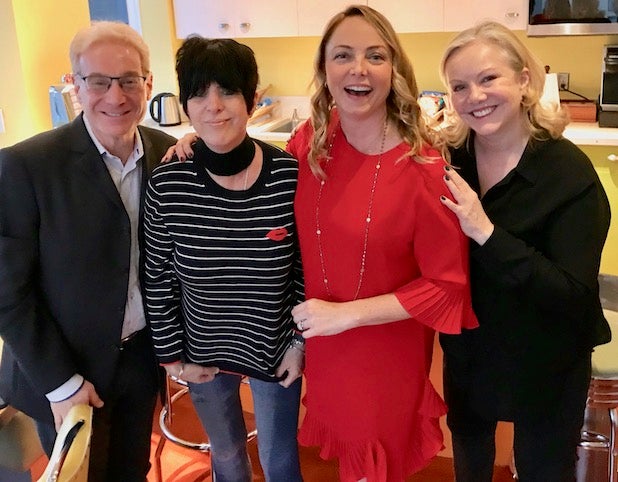 “The Right Girl,” whose live-read in February WaxWord attended, tells the story of fast-rising producer Eleanor Stark, who goes to work as the second-in-command to Paul Schulz, a brilliant studio chief with a remarkable resemblance to Weinstein. She comes to realize his predatory behavior toward other women and has to decide if she will go public with what she knows. The show stars Alysha Umphress (“On the Town”) as Eleanor, Tony Yazbeck (“On the Town”) as Paul and Robyn Hurder (“Moulin Rouge!”) as the accuser.

In an odd twist of fate, the first-ever run-through of the play came together just one day after the former mogul’s rape conviction in New York City. In another odd twist, Stroman directed the 2001 musical hit “The Producers” that Weinstein himself produced and for which he won one of his nine Tony Awards. The rehearsal took place at Warren’s music studio in Hollywood, where she saw her songs set to the story for the first time. The audience included Geiss and a tight-knit group of friends, fellow survivors and investors.

“I burst into tears as they read the first part of the verdict, and then I came here to work on this,” said Sarah Anne Masse, one of about 20 “silence breakers” who contributed their stories to the musical. Masse was also one of the performers at the March run-through, singing soulfully about “predation.”

Those who have followed the Harvey Weinstein case will recognize in the play details tied to Weinstein in particular and the #MeToo movement in general. Eleanor is taught on her first day of work to knock six times on the mogul’s door so as not to interrupt activities behind it. After a traumatic experience with Schulz, one character leaves entertainment to become a real estate agent — which is pretty much what happened to Geiss herself.

“The impetus for me was on a daily basis listening to the other women on our email thread,” Geiss said. “So many of the stories are so challenging and horrific. I thought, ‘Oh, my God, I need to change the way we look at this experience.’…  I could see the spiraling down of so many of us. And I woke up one morning and I thought, ‘How can I change it?’ These are all artists, all creatives. We need to create a show about it that would uplift these women and allow them to focus on something that’s positive.” 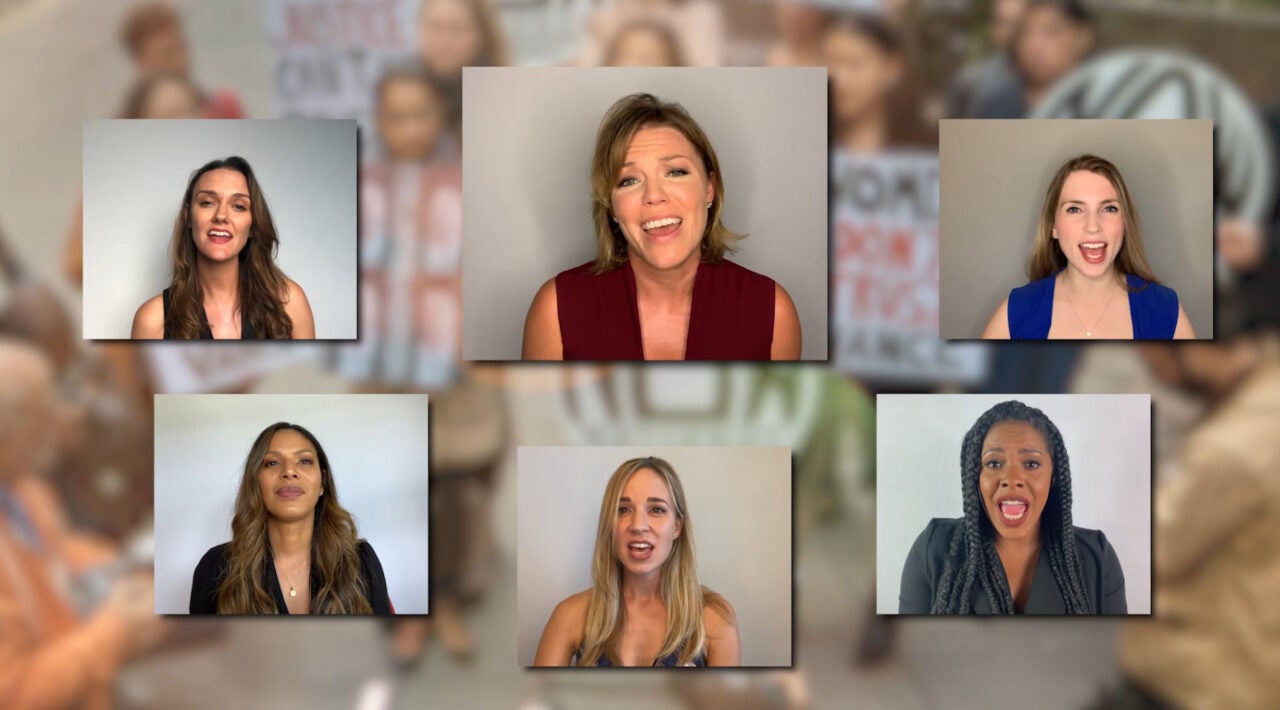 Screenshot from a performance of “The Right Girl”

When one survivor describes her attack by the mogul in the play, she says she found herself unable to move. “I was frozen. I felt like my limbs were bricks, like every movement was like moving through thick mud,” she says, describing getting to the hotel room door, and Paul blocking her exit.

And another survivor says: “It all seems perfectly normal — thrilling even, I mean he’s a really big deal in this town — until he’s on top of you.”

Geiss met Kagan, a veteran Broadway producer and former Wall Street investor, when he bid on the bankrupt Weinstein Company but lost out to Lantern, a private equity firm. In the course of the bidding, Kagan stood out because he wanted to create a fund for the women who had claimed sexual abuse by Weinstein. “We lost the auction,” Kagan said. “A couple months later, Louisette called with this idea — do something like ‘The Vagina Monologues,’ letting women speak their truth.” Kagan said he thought it would be better as a musical (he was thinking of “A Chorus Line.”)

Geiss decided to pitch Warren when she met the celebrated songwriter at TheWrap’s first annual Power Women Summit for women in 2018. Warren performed at the event and Geiss was honored along with other survivors of sexual abuse in the media and entertainment industries.

Warren, who has written songs for Lady Gaga, Celine Dion, Jennifer Hudson, Chrissy Metz and many others, said she found the project “interesting.” “I write songs for an artist,” she said. “I’ve never been in a room and seen something like this. I’ve never sat there and watched people act out the songs before. I’ve never done a show on Broadway.” 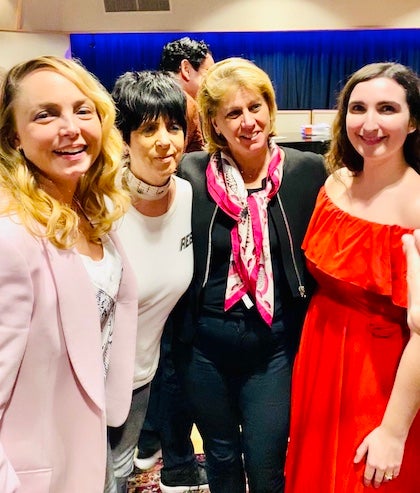 Warren has written a dozen songs for the show, one appropriately titled “You F—ed With the Wrong Girl.” (Most of the songs are drawn from Warren’s catalog, such as “Till It Happens to You,” the Oscar-nominated anthem performed by Lady Gaga for a documentary about rape on college campuses, “The Hunting Ground.”)

The story is based on the true stories of about two dozen Hollywood sexual assault survivors — accusers of Weinstein as well as James Toback, R Kelly, Russell Simmons Louis CK and others — who gave the rights to the producers and will receive 2% each of the musical’s take.

“We’re the Tom’s Shoes of musical-making,” Geiss said. “These women are desperate for work. Anabella Sciorra needs work. So I hope we’re creating something other companies will look at, and say — ‘Do it this way.’”

The idea that a tragic story about serial rape and the struggle of women to be heard — the heart of the #MeToo revolution — could end in a play co-written by a woman, scored by a woman and directed by a woman was a karmic arc that no one could have predicted.

“It’s a miracle to tell this story,” Kagan said.