Carol Kirkwood shut down her BBC Breakfast co-star after he expressed his dislike at what was in store for the nation in regards in to the weather this week. The meteorologist’s summary included snow and she wouldn’t allow Dan Walker to moan about the cold spell.

Dan said: “We’ll get the weather from Carol in a moment of course.”

“This weekend was full of sledging, snowmen and the old snowball fight,” Louise Minchin continued.

“We’ve put together some of the best pictures for you in the build-up to Carol,” Dan said. “I love the way Carol gets a build-up in this programme now.”

BBC Breakfast viewers were then treated to a montage of people enjoying the snow over the weekend. 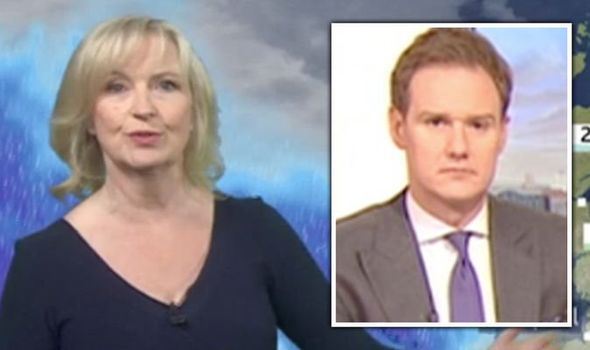 After the clip aired, Dan asked: “Can I have a little moan about the weather? Just a mini moan.

“Carol it’s not a moan at you at all. There was quite a bit of snow coverage in the north of England and other parts of the country last week.

“Hardy anything on the national news and then you get a lovely snow montage when it snows down south.”

“This is a north-south divide in full effect, Carol,” Dan quipped.

The weather presenter responded: “Get out of here Dan.”