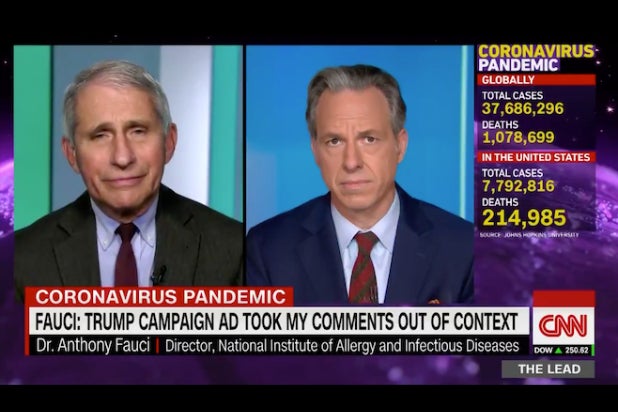 Anthony Fauci, the nation’s top infectious diseases expert, said the Trump campaign should take down a “completely out of context” ad that features Fauci seemingly praising the president’s response to the pandemic.

“I think it’s really unfortunate and really disappointing that they did that. It’s so clear that I’m not a political person and I have never — either directly or indirectly — endorsed a political candidate, and to take a completely out of context statement and put it in which is obviously a political campaign ad, I thought was really very disappointing,” Fauci told CNN’s Jake Tapper on Monday.

The ad was released last week after Trump was discharged from Walter Reed Medical Center and gives a positive spin to Trump’s COVID-19 diagnosis.

“President Trump is recovering from the coronavirus, and so is America,” the narrator for the ad says. “Together we rose to meet the challenge, protecting our seniors, getting them life-saving drugs in record time, sparing no expense.”

The ad then cuts to an undated clip of an interview with Fauci, where he says, “I can’t imagine that anybody could be doing more.”

But taken in context, Fauci’s comments — given during a March interview with Fox News — were referring to his efforts, alongside the White House coronavirus task force, to respond to the pandemic when it was still in the earlier stages in the U.S.

“Since the beginning, that we even recognized what this was, I have been devoting almost full time on this. I’m down at the White House virtually every day with the task force. I’m connected by phone throughout the day and into the night and when I say night, I’m talking twelve, one, two in the morning. I’m not the only one. There’s a whole group of us that are doing that. It’s every single day, so I can’t imagine that under any circumstances that anybody could be doing more,” Fauci said at the time.

In Monday’s interview on CNN, Fauci also said it would be “terrible” and “outrageous” if he were featured in future Trump campaign ads.

“I hope they don’t do that because that would be kind of playing a game that we don’t want to play,” Fauci said.

In a statement, the Trump campaign defended the campaign’s ad.

“These are Dr. Fauci’s own words. The video is from a nationally broadcast television interview in which Dr. Fauci was praising the work of the Trump Administration. The words spoken are accurate, and directly from Dr. Fauci’s mouth,” Tim Murtaugh, Trump campaign’s communications director, said in a statement.

Watch Fauci’s interview on CNN below: