Encanto continues to expand Disney‘s cultural sense of storytelling. Audiences connect with the Madrigal family, each member having individual powers and personalities. However, a new theory suggests that Dolores (voiced by Adassa) is actually the villain and is responsible for the candle’s loss of magic in Encanto.

The story follows a Colombian teenager named Mirabel (voiced by Stephanie Beatriz). The family has a magical candle that grants each Madrigal family member powers. However, Mirabel is the only person to not get any gift when she came of age. She soon discovers that her family members’ powers are fading and she must find a way to stop them from disappearing completely.

Dolores is Mirabel’s oldest cousin in Encanto. She’s a supporting character with the power of super hearing. However, this ultimately gets Mirabel into trouble, when she’s able to overhear Bruno’s vision from Mirabel that the magic disappearing could be her fault.

‘Encanto’ theory suggests that Dolores is the villain who broke magic 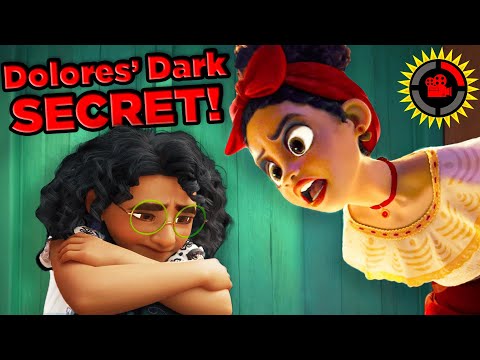 The Film Theorists YouTube channel posted a theory that Dolores is actually the villain in Encanto. The facts prove the reasons why she would want the family’s magic to disappear.

This theory points out how super hearing sounds like a wonderful gift on paper, but that it’s so powerful that it’s making Dolores miserable. Encanto showcases multiple examples of this, such as when Dolores recoils in response to fireworks and can hear sounds as detailed as her family blinking their eyes.

The Film Theorists explains how the amygdala in the human brain works, which processes emotional responses. Dolores frequently encounters overstimulation in Encanto as a result of her extra-sensitive hearing. As a result, she has a sensory overload that never goes away.

Dolores chooses to hide a lot of information from her family in Encanto. She heard Bruno in the walls for all of those years but chose not to tell anyone about it. Additionally, she would have heard the house cracking, but chooses to not stick up for Mirabel. She “weaponized” Mirabel and exposed her secret about Bruno’s vision to the family, knowing how it would pull them apart.

Encanto includes a romance between Isabela (voiced by Diane Guerrero) and Mariano (voiced by Maluma). However, Dolores has feelings for him. She could free herself from super hearing and could have a chance with Mariano if she destroys the magic. After all, she clearly resents Isabela over Mariano’s affection.

Finally, The Film Theorists points to the ending after the house is rebuilt. Encanto shows Dolores much happier after the magic is gone and Mariano finally notices her. However, the final door that showcases the Madrigal family with smiles on their faces also includes a gloomy-looking Dolores. She’s the only character without an upturned mouth.

Disney typically includes a villain arc in their stories. As a result, some fans even prefer the antagonists over the heroes in the stories. Nevertheless, Encanto sticks out as having no obvious villain. Rather, it’s a story about family and what it means to embrace differences in one another.

However, this theory explains why Encanto‘s Dolores is actually the villain. It’s not as forward as most other Disney films, but it’s clear that she has her own motives. The filmmakers haven’t confirmed the theory, but it certainly has fans talking about the possibility that Disney’s latest movie might actually have an antagonist.