Emmerdale resident Dan Spencer (played by Liam Fox) was hospitalised this evening after suffering from an allergic reaction after eating a wrap from Brenda Walker’s (Lesley Dunlop) cafe. But, while viewers are going to be wondering what lasting damage has been caused by the anaphylactic shock, they should be more concerned about Jacob Gallagher (Joe-Warren Plant).

It comes after Eric Pollard (Chris Chittell) rang to David Metcalfe’s (Matthew Wolfenden) house to get Jacob’s EpiPen in hope of using it to save Dan.

While his efforts were appreciated, local nurse Wendy Posner (Susan Cookson) revealed the drug was in fact out of date and no use.

With Dan rushed off to the hospital to receive emergency treatment, Eric was left fuming at his grandson and son for being so careless.

During a scene in the Woolpack with Mandy Dingle (Lisa Riley), Eric made his feelings clear. 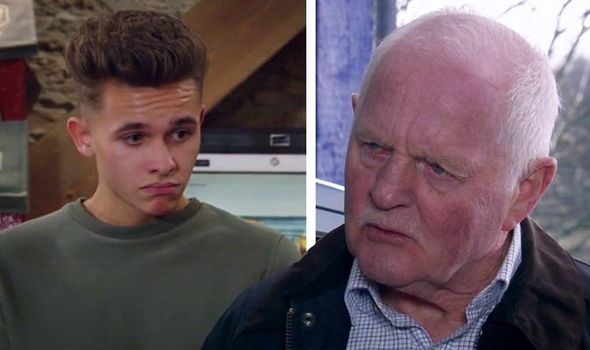 “You just happened to be walking past?” Mandy asked, digging for details on the incident.

“No, I was with Brenda and she had to give Dan his keys, or something,” Eric explained.

“And what he just collapsed? Imagine if you hadn’t of found him!” Mandy remarked. “Look they must have some news by now, do you reckon I should phone?”

But Eric was adamant: “No, leave it for a while, Kerry has Amelia to think about.”

Jacob then walked into the pub and Eric exclaimed: “Ah, there he is, you got my text then?” 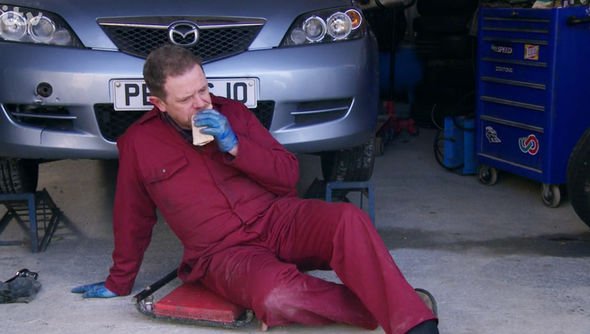 “Is this about Brenda? She’s kicked everyone out the cafe and shut the place up,” Jacob commented.

“No! He couldn’t breathe on the count of his throat being swollen up. Anaphylactic shock, are you familiar with that term?” Eric asked.

“So, I went over to your house to see if I could borrow one of your adrenaline pens to try and save his life, and guess what?” He continued.

“What, is he dead?” Jacob panicked.

“No he is not dead, no thanks to you,” Eric confirmed.

“Your pen was out of date and therefore useless! What if that had been you? You were out by yourself and needed it – what then?”

“Sort it out!” His grandfather warned but this was not the last time the matter was discussed.

In a later scene, Leyla Harding (Roxy Shahidi) joined Eric and Jacob in the Woolpack for a drink.

“Why was your EpiPen out of date?” She questioned her son.

“I’m sorry alright?” Jacob sulked and Eric added: “We’ve spoken about it, it’s as much David’s fault as it is his!”

Eric and Jacob then left Leyla in the pub as Dr. Liam Cavanagh (Johnny McPherson) arrived.

Walking home together, Jacob stated: “I’ll call the surgery in the morning, get them to give me a new prescription.”

But will Jacob remember? Or will he suffer an allergic reaction before getting a new EpiPen on stock?