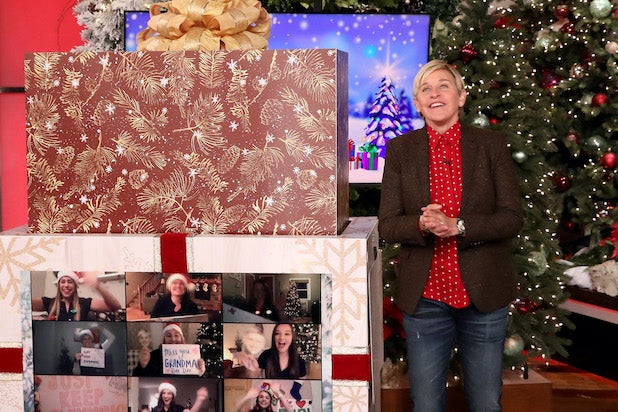 The “Ellen” show hit a season high in TV ratings with its “12 Days of Giveaways” kickoff during Thanksgiving Week. Sometimes when you give, you also receive.

The daytime talk show’s 1.3 national Live + Same Day rating is its highest since the “toxic workplace” scandal this summer. (Technically, it is the highest rating since the week ending May 31, 2020.)

The 1.3 rating was +18% from the previous week, according to Nielsen.

It should be noted here that Thanksgiving itself and Black Friday were not counted for many daytime shows, including “Ellen,” due to the holidays and the preemptions that come with them.

Ellen DeGeneres may not be totally thankful about the season-high, however. The Warner Bros. show’s ratings were still down 35% from the same week in 2019.

Topping the talk shows was “Live with Kelly and Ryan,” with a 1.9. “Dr. Phil” dropped 10% week to week and into second place. Dr. Phil’s talk show was among the few that did not get to back out Thursday and Friday shows for the week ending Nov. 29, 2020.

Overall and as per usual, nobody touched “Judge Judy,” which had a 6.0 rating. Like “Ellen,” Judge Judith Sheindlin’s “Hot Bench” hit a new season high, with a 1.8 rating.

Sheindlin created “Hot Bench,” she does not preside over it on-camera.

In terms of game shows, “Family Feud” and “Jeopardy” tied, both down double digits on a percentage basis and settling into a 5.0 rating. “Wheel of Fortune” was down around the same amount and just missed making it a three-way tie with a 4.9.

In a memo to staff back in July, DeGeneres said she was “disappointed” to learn that employees felt mistreated while working on her show and committed herself to “ensuring this does not happen again.”

On Sept. 21’s Season 18 premiere, DeGeneres offered an on-air apology. See how that message played out in the ratings here.