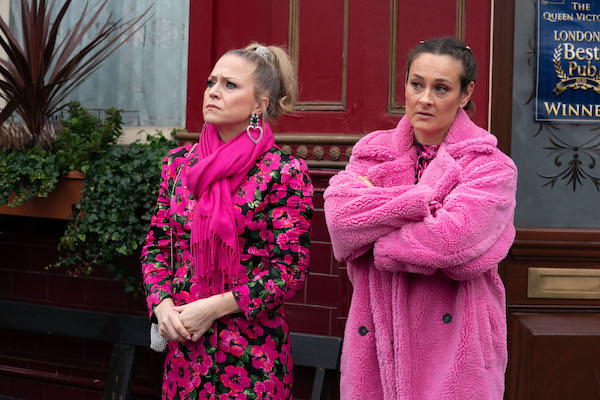 Linda and Tina Carter have reunited. Kind of. As EastEnders fans speculate that Tina may still be in the land of the living after being seemingly bumped off over Christmas, actress Luisa Bradshaw-White has met up off screen with her Walford co-star Kellie Bright.

The pair reunited for a woodland dog walk, though as Bright pointed out on Instagram, Bradshaw-White had forgotten her own pet pooch.

Unaware that Gray (Toby Alexander-Smith) is responsible for her absence, the band ended up turning to the murderous legal eagle for help in tracking her down.

His visibly anxious reaction suggested that he fears his crime being exposed. But next week’s episodes of the BBC1 soap see events take an unexpected turn when DCI Arthurs informs Mick (Danny Dyer) and Shirley (Linda Henry) that someone matching Tina’s description has been spotted shoplifting.

After learning that the thief gave her name before scarpering, Shirley sets off in search of her.

So, might this mean that viewers haven’t seen the last of Tina after all? Some devotees are desperately hoping so, with social media currently awash with hopes that she’s still alive and well.

But following the broadcast of what appeared to be Tina’s final scenes in December 2020, Bradshaw-White posted her thanks for the support of fans, before adding she had “loved every second” of working at EastEnders. Note the use of the past tense, there.