For years, the Electronic Entertainment Expo, or E3, has been the video game industry’s most important annual event. The weeklong trade fair, typically held in Los Angeles and attended by thousands of retailers and journalists, serves as a gathering where video game publishers reveal their upcoming titles and new hardware.

Like most other large conventions, E3 2020, which would’ve taken place in mid-June, was cancelled due to the ongoing pandemic. Though the cancellation was undoubtedly disruptive for the publishers and developers who attend E3 to promote their upcoming products, it is but the latest in a string of challenges for E3, which has seen some of its most prominent corporate attendees withdraw from the event in recent years.

Sony, which produces the Playstation console and publishes titles in popular franchises such as “Spider-Man,” “The Last of Us,” and “God of War,” made headlines when it announced that it would not attend E3 in 2019. The company also announced that it would not attend E3 2020 months before the event was cancelled. Electronic Arts, another major video game publisher, stopped directly participating in E3 in 2016 and instead hosts separate “EA Play” events near the E3 conventions every year. Sony and Electronic Arts held their own virtual events earlier this month to promote their upcoming products.

The withdrawal of major companies from E3 and the evolving nature of the video game industry pose questions about E3’s relevance. Doug Clinton, managing partner of tech VC fund Loup Ventures, compared the withdrawals to Apple’s abandonment of the Macworld trade show. He noted that large video game companies are popular enough to successfully host their own events, which are cheaper, easier to produce, and allow businesses such as Sony to promote their products without competing for attention during the busy E3 news cycle.

“Apple announced the iPhone at Macworld (in 2007), which was an industry event,” Clinton said in an interview. “Two years after that, Apple decided they wouldn’t attend Macworld. I think some of these video game companies that make the biggest announcements are starting to realize that they can do the Apple model and run their own events and get as much, if not potentially more, attention if they do reveals outside an industry event. When you announce things at E3 or another major event, you can get lost in the news cycle because people have limited time to engage in the event.”

The video game industry has significantly changed since the first E3 was held in 1995. Though the early E3s were primarily industry insider-oriented, E3 has evolved alongside the increasingly popular industry to become more consumer-focused, and recent E3s are primarily notable for their bombastic game trailers, eclectic performances, and celebrity cameos. Although most E3s have been closed to the public, the event was opened to the public in 2017 following years of declining attendee numbers.

While E3 has evolved, the event’s consumer-oriented pivots haven’t been enough to stop the event from suffering from identity crises in recent years, according to Dave Cole, an analyst at video game industry research firm DFC Intelligence.

“E3 started as more of a business event where executives get a lot of the buyers from retail stores who had to know what games were releasing during the holiday season,” Cole said in an interview. “Now, not only has the retail market changed — distribution is primarily done digitally — but products release on a year-round basis instead of just the holiday season. Electronic Arts publishes far fewer products because they look at games as an ongoing service, such as ‘Apex Legends,’ which launched last year and is still being updated. The industry is more about ongoing updates throughout the year, which doesn’t necessarily fit into the E3 retail mentality where companies are trying to promote a product to launch at a specific time. E3 has become somewhat more consumer-focused to reach that audience, but it’s very much a case of identity crisis.”

Representatives from the Electronic Software Association, which organizes E3, did not return a request for comment about the state of E3 and the event’s future.

The companies whose presentations have traditionally defined E3 are also staying quiet: Representatives from Nintendo, Sony, Microsoft, Electronic Arts, Activision, Square Enix, and Bethesda did not return requests for comment. A Ubisoft representative declined to answer questions and referred IndieWire to the company’s upcoming Ubisoft Forward event, a digital press conference that will boast new game reveals and other news on July 12.

Such digital events have become increasingly common in the gaming industry, including for companies that still have a presence at E3. Nintendo has had an exhibitor presence at all recent E3s, but the company began eschewing live press conferences in favor of pre-recorded virtual “Nintendo Directs” in 2013, though those events are not exclusive to E3 — the company regularly releases new Nintendo Directs throughout the year.

While the larger video game publishers have the preexisting brand awareness to generate attention outside of E3, the annual event still serves as an opportunity for smaller indie studios to promote their upcoming games. That said, analysts were split on E3’s value for smaller publishers: Clinton argued that E3 can give indie studios a voice that would otherwise be ignored outside the gaming event, while Cole said such developers tend to be crowded out by the larger publishers during E3. Wedbush managing director Michael Pachter noted that although smaller developers have difficulty thriving on their own at E3, some of the larger publishers will frequently highlight their work during their own E3 presentations.

“The show is less meaningful for small developers unless they make it onto the stage for one of the big events,” Pachter said in an email. “Electronic Arts and Microsoft regularly showcase indie developers, and Sony used to when it showed up, so it’s a great boost for those who are highlighted.” 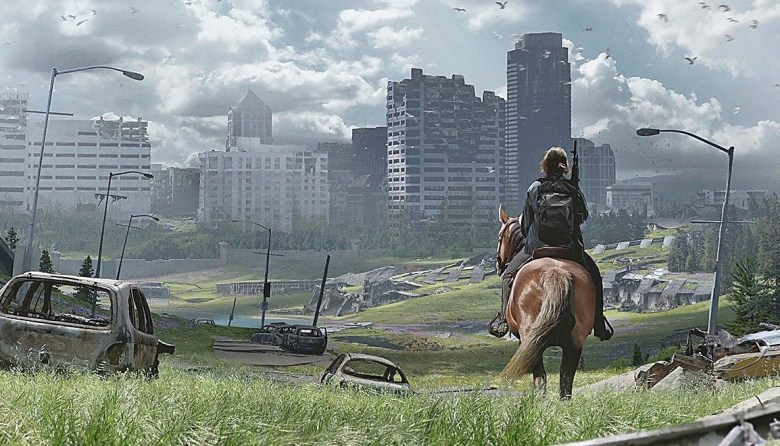 “The Last of Us Part II”

Given that practically all of the major products that would’ve been featured at E3 2020 won’t release for several months, it’s unclear how detrimental the event’s cancellation will be for game publishers. That said, there are recent signs that major companies are generating plenty of attention hosting their own virtual events outside of E3. Sony’s recent Playstation 5 YouTube videos, which included various game trailers in addition to the actual Playstation 5 console announcement, have been collectively viewed over 50 million times. Videos from Electronic Arts’ recent EA Play event, such as the reveal of a new “Star Wars” game, have also been viewership successes.

“Cyberpunk 2077,” one of the most notable games to be featured at E3 2019 and one of the year’s most anticipated games in general, has generated considerable buzz despite E3 2020’s cancellation. Developer CD Projekt Red released new videos to promote the upcoming game on Thursday; the game’s official trailer and a separate informational video have been viewed 3.5 million times on YouTube within a day of their release.

As far as actual game sales go, Sony announced on Friday that “The Last of Us Part II,” which released on June 19, sold more than 4 million copies within three days of launch.

While large video game companies have the clout to successfully run their own virtual events, E3 is still critically important to the overall video game industry, according to Pachter.

“The companies don’t need E3, the industry does,” Pachter said. “E3 puts the industry in the spotlight for a week every year. Sony’s PS5 showcase didn’t attract the attention E3 attracts, and Sony would have been more effective unveiling PS5 at E3.”

“I have no idea what Sony is thinking, but I think their withdrawal is misguided,” Pachter said. “They should work within the ESA to get the show’s vision to fit Sony’s corporate strategy, and I agree that it’s worrying that such an important player skipped the event. It definitely hurts the event, and Sony is worse off if it kills E3 by failing to attend. They clearly are making a cost-benefit trade off, and they don’t perceive the benefits to outweigh the costs.”

It’s unclear what E3 will look like when the event presumably returns in 2021, but Clinton and Cole noted that there are steps that the Electronic Software Association could take to ensure that E3 remains an integral part of the video game industry. Cole argued that the physical portion of E3 could be scaled down and return to its roots — by limiting crowd sizes and emphasizing industry-insider networking elements — while still doing glitzy game reveals and press conferences online for general audiences, while Clinton suggested that E3 could become a primarily virtual event.

The next few months will serve as something of a test for large-scale virtual events. Comic-Con is going virtual this year and will be hosting a free four-day event in July that seeks to emulate the traditional San Diego convention, while Warner Bros. is gearing up for a similar virtual event to promote its variety of upcoming superhero properties. Clinton noted that it would be a significant undertaking for E3 to go digital but stressed that video gaming is the ideal medium for a large-scale virtual convention.

“The purpose of gaming is to create a virtual world where people can interact,” Clinton said. “E3 can embrace gaming more deeply and make it more of a virtual event. If any entity can figure out a great virtual gathering, it’d be E3. In terms of next year, I doubt they could make it fully or even partially virtual, but it should be on their long-term roadmap.”