Dwayne Johnson’s childhood gets the spotlight on Young Rock.

NBC’s new biographical comedy series, inspired by the former pro wrestler turned movie star/entrepreneur’s colorful life, follows Dwayne at pivotal points of his youth — at 10 years old (played by Adrian Groulx), 15 (Bradley Constant) and then 18 (Uli Latukefu). Told through interviews conducted by Randall Park in the near future with an older Dwayne (played by Johnson) amid his (fictional) presidential run in 2032, the unique interwoven way into exploring the different facets of Dwayne’s upbringing — and how they’ve shaped him to be who he is today — is what makes Young Rock singular.

As Johnson explains in an exclusive interview with ET’s Nischelle Turner, alongside Constant, zeroing in on those three crucial moments in his childhood to explore fully felt like a given. Finding the right actors to fill those spaces was equally rewarding for the 48-year-old.

“Once we decided that the time periods of my life that we were going to show — 10 years old, 15 and 18 — at 15, I had already been arrested multiple times, I was trying to find my way. I was doing a lot of things I shouldn’t have been doing, getting suspended from school, moving from school to school to school, so the actor who had to play that really had to bring all that with him,” Johnson said. “And Bradley, when he sent in his audition, I immediately knew. ‘There’s me at 15,’ and then I had a chance to meet with Bradley virtually because we were locked down with COVID and we had a great call and he committed. I got really, really lucky to have somebody as good as Bradley play me at 15.”

Constant said getting to inhabit the life experiences of a young Johnson was “incredible.” “I think the coolest part was realizing how much more we actually had in common,” the 22-year-old newcomer said. “I think that was the biggest part of the whole story.” 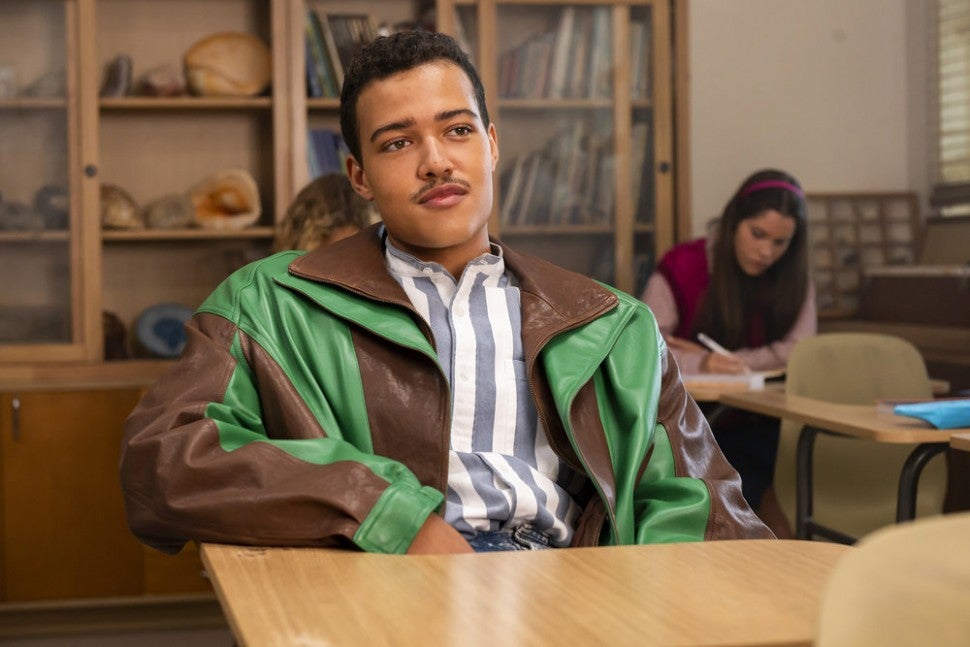 With so much of Johnson’s life being told through a comic lens, he addressed whether there were specific moments over the years his family was wary of all to see.

“There were things that we had brought up, myself and our show creator Nahnatchka [Khan] and our producers, that we had intimate conversations [about] because that’s one of the key elements about something like this. It’s like writing a book and if you’re gonna write a book, you have to be revealing and you have to be open if you’re willing to share that because there’s value of sharing those stories when they’re life lessons,” Johnson shared. “And in this case, we have a comedy that’s wrapped up in some great humor, but also the takeaway here is we all go through tough times and hopefully we learn valuable lessons from that.”

“I was really careful to make sure that if we are gonna tell stories [they were important]. For example, I bought my first car from a crackhead — I’ll admit that — when I was 15 years old and somewhere out there, there is a crackhead that I owe another 40 dollars to for this car. There are stories like that… I made sure that everything you see in this series is true,” he continued. “Now maybe I changed the landscape, maybe I changed the year, but the essence of every single thing you see is true. When I look back on this, you get really blown away by it and blown away at this opportunity to showcase this.”

Johnson’s late father, trailblazing wrestler Rocky Johnson (played by Joseph Lee Anderson), has a big presence on Young Rock. Johnson reflected on his dad’s death last January and how he would have responded to the series.

“I really wish he could’ve seen this because my dad worked so hard as a professional wrestler at a time when pro wrestling was not the big global entity that it is today where guys and girls are making a lot of money and the company’s doing very well. It was a much different time. He trailblazed as one of the first Black wrestlers in the world of pro wrestling and so he had a long, hard road, and a journey, and we had a complicated relationship that was full of tough love. But there was love there and this would be something that he would be proud of,” Johnson said. “He passed away suddenly, but he was aware that we were doing this and he was excited. But it’s funny, when I look back on this entire season and I’ve watched all these episodes come in, I realize that I’m so happy of the way that I was able to portray my dad because even though there were tough times that we learned the valuable lessons through, he was still a good guy and he was a great friend to a lot of people and he was charismatic. And I like showcasing that because when somebody’s gone, they’re gone and we don’t have a chance to bring ’em back, but we do have a chance to remember the good stuff and talk about the good stuff.”

Johnson praised Anderson’s performance as his dad, calling his portrayal “uncanny.” “He really embraced being the soul man and what that meant. And here’s a guy, Joseph, who never wrestled, and he had to learn professional wrestling and my dad was no joke in the ring. He was a bad dude and Joseph really did a great job,” he said. “This experience is unlike anything I’ve ever experienced in my entire career of Hollywood and I don’t know if I’ll ever experience anything like this again that’s so close and intimate to my heart. I’m happy to share it with the world and maybe that they get some laughs and they get a little bit more out of it as well.”