On the eve of Thanksgiving, Joe Biden asked Americans to remember “we’re at a war with a virus — not with each other,” while Donald Trump again refused to be thankful for a chance to go quietly into the Presidential night.

In what is expected to be the first of many parting shots, Trump on Tuesday issued a full pardon to his former National Security Advisor Michael Flynn. Although the matter continues to be fought over in the courts, the retired general was convicted of lying to the FBI in its investigation of Russian meddling in the 2016 election.

Up in Wilmington DE, Biden was taking a far less sordid approach to events.

“Faith, courage, sacrifice, service to country, service to each other, and gratitude even in the face of suffering, have long been part of what Thanksgiving means in America,” Biden said earlier in the day as the country saw COVID-19 cases and deaths soar again.

“Now, we find ourselves again facing a long, hard winter,” the President-elect continued in an address deep on empathy and promises to combat the coronavirus as well as systemic racism, global warming, “cancer and Alzheimer’s and diabetes.” 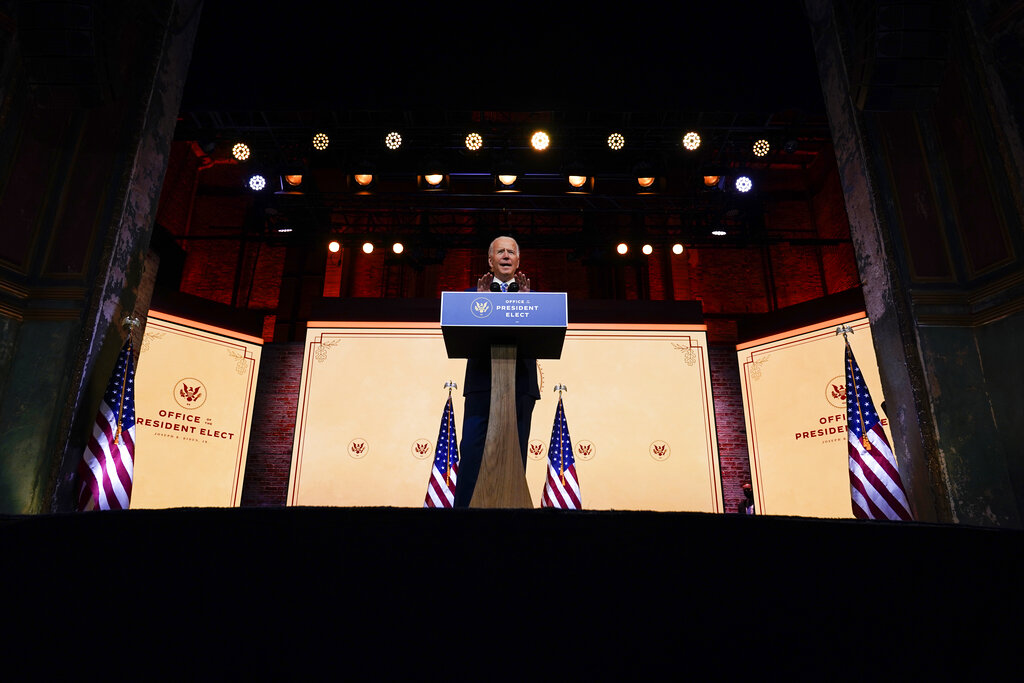 Biden has long sought to differentiate himself from Trump in both style and substance. Today was certainly a sartorial flex, by any other name.

In a case of a split-screen that never really happened, the former Celebrity Apprentice host also called in Wednesday to a Pennsylvania GOP meeting just as Biden was delivering his holiday address.

“This election was lost by the Democrats,” Trump told the gathering at Gettysburg’s Wyndham Hotel as lawyer Jenna Ellis held her iPhone up to the microphone. “We won this election by a lot, we got 74 million votes,” Trump added, not noting that the Biden-Harris ticket has received more than 80 million votes.

“They cheated,” Trump went on to rant from the White House two days after the General Services Administration sign-off on the Biden transition. “It was a fraudulent election.”

The results of that election are that the Biden-Harris transition team has finally started meeting with administration officials and getting their hands on much-needed data and funding heading towards the inauguration on January 20, 2021.

CNN, MSNBC and BBC America all cut live to Biden’s anticipated address, but Fox News first stayed with Dana Perino chatting with Fox & Friends co-host Steve Doocy about Thanksgiving delicacies. FNC went to Biden about three minutes after he started his remarks. BBCA weaved in and out of the speech after covering the first bit. Of the broadcast nets, only ABC carried Biden’s remarks live today.

Nobody but hard-core conservative outlet One America News covered the unofficial Pennslyvania hearing, though it was livestreamed. Everyone on God’s green Earth reported on the Flynn pardon.

The Keystone State and its 20 electoral votes was called for PA-born Biden on November 7, assuring his overall victory. After various legal challenges by Team Trump were tossed, the state certified the win Tuesday, ending the question for everyone but Trump.

At one point last night, there were reports that Trump would join Ellis and Rudy Giuliani at the Gettysburg gathering. But, like Trump’s reelection, clearly that never happened.

On the other hand, Biden was rooted in facts and a better tomorrow.

“On this Thanksgiving, and in anticipation of all the Thanksgivings to come, let us dream again,” the upcoming 46th POTUS said today. “Let us commit ourselves to thinking not only of ourselves but of others. For if we care for one another — if we open our arms rather than brandish our fists — we can, with God’s help, heal.”