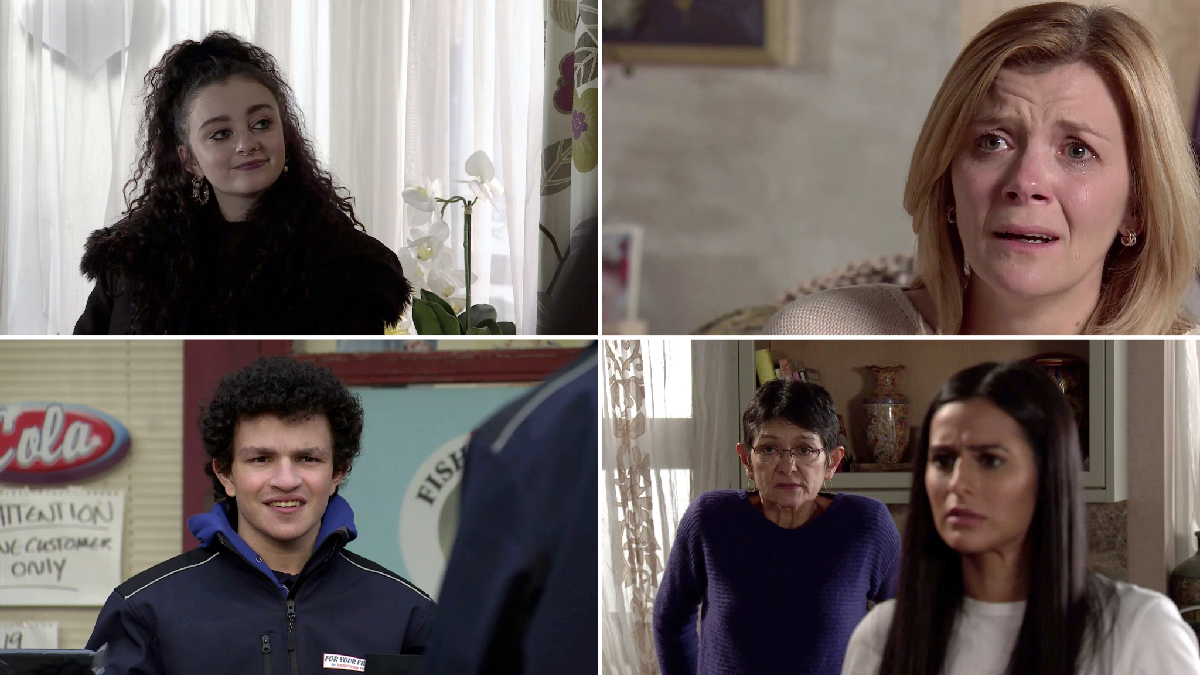 Things for Yasmeen Nazir (Shelley King) are set to spiral out of control once more as debt letters and reminders of her abusive marriage lead to visions of Geoff Metcalfe (Ian Bartholomew) in Coronation Street.

Meanwhile, determined to prove he is okay with Asha Alahan’s (Tanisha Gorey) romance with Nina Lucas (Mollie Gallagher), Dev (Jimmi Harkishin) pulls out all the stops.

Carla masks her discomfort when Lucas arrives at the factory. As Lucas returns, he insists his intentions are honourable but Peter watches from afar, suspicious about what is going on between them.

Eileen assures George that with Tim driving, Ted’s funeral can go ahead. Steve is annoyed that he wasn’t asked.

A customer asks Yasmeen about Geoff, she flees from the restaurant. Elaine suggests removing all traces of Geoff but Alya discovers a huge amount of debt letters.

Simon returns home and makes out to Leanne that he stayed with her mates. Later, Simon shows off to Jacob and he asserts he will fit right into his new role.

Ronnie suggests they have a night out at the casino, Ed admits his gambling problem.

Peter heads out, deeply upset and with the wrong idea. Carla calls round and finds Peter wallowing. She is bewildered to see him so down. Later, Carla shares a wine with Jenny and sends a text to Peter as a cover story. Peter realises that she lied to him.

Alya opens the letters and resolves to seek professional advice. Imran reminds Alya that Yasmeen hasn’t yet settled her legal fees. Alya tells Yasmeen that she has made an appointment with the bank.

Aggie has a go at Ed, Grace listens in. Jacob gives Simon a new phone and then suggests he samples the drugs himself.

Alya suggests to Yasmeen that she sells the community centre. She searches for her old jewellery. Two bailiffs soon arrive to collect payments for the debts.

Ted’s coffin is in the living room and Gail confides that she just wants a proper send off. Tim gets jitters, leaving Eileen to drive the hearse but will all go to plan?

Toyah calls round to find Leanne tidying up as she has boked a psychic is coming round. When he arrives, he makes out he is in contact with Oliver and Toyah’s heart breaks.

Peter accuses Carla of spending the night with Lucas. Dev goes over the top to welcome Nina to dinner as Asha cringes.

The bailiff tells Alya that they will put a repayment plan in place. The bank manager has bad news for Yasmeen and Alya. Yasmeen suffers a panic attack, convinced the manager is Geoff. Alya again brings up the idea of selling the community centre.

George tells Eileen that she humiliated him and she is devastated. The psychic passes on a message to Leanne, she breaks down and Toyah comforts her. Leanne soon realises she has been conned. Toyah gently suggests to her that she focuses on Simon as she saw him hanging around with a bad crowd.

Carla assures Peter she loves him but worries she is the cause of his drink problem. Lucas makes an announcement.

Nick calls round with breakfast for Leanne and Simon. Sam begs Simon to take him on a bike ride but Jacob arrives and gives him an urgent job. Simon leaves his delivery bag behind by accident. Sam witnesses Simon and Jacob assaulting another lad and he rides off, with the delivery bag full of drugs.

Yasmeen tells Alya, Ryan and Elaine that she knows they are doing their best but they have to let her make her own decisions if she is to move on. Tim reveals to Sally that Geoff has left him half of number 6 and a quarter of Speed Daal.

In the cafe, Eileen apologises to George and assures him that it was a mistake. Gail calls in and drives George to the library, leaving Eileen scatching. As they argue, George snaps.

Inviting Nina to dinner, Dev and Mary plan an evening to try and impress her with a lesbian fresh film. Nina is moved that they have gone to so much trouble.

Gary warns Johnny to watch his cellmate Kai as he is bad news.