Nina (played by Mollie Gallagher) has been trying to get her life back on track since the death of her father over a year ago on Coronation Street and adjusting to living with her uncle, Roy Cropper (David Neilson). The youngster has made friends with a number of the local teenagers, but she has struck up quite the bond with Asha (Tanisha Gorey). Bosses of the ITV soap have previously ruled out a romance for these two characters but it seems the gothic character could fall for someone who has a connection to Dev Alahan’s (Jimmi Harkishin) daughter?

During Monday’s double-bill of the weeknight serial drama, Nina was seen talking to Asha about her plans for her 16th birthday.

The schoolgirl seemed more worried about what her boyfriend Corey Brent (Maximus Evans) wanted to do to celebrate the big day.

Trying to take her mind of off things and knowing the teenager liked her sense of style, the café assistant turned up at the Alahan house to have a word with her friend.

After Dev left the two girls to it, Roy’s niece commented: “Your dad is so awkward around me, I think I make him nervous.”

She then listened as Asha told her how her boyfriend wanted to have sex with her but she wasn’t totally convinced by his plans. 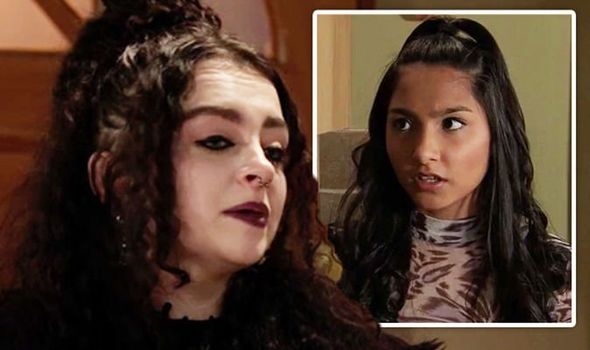 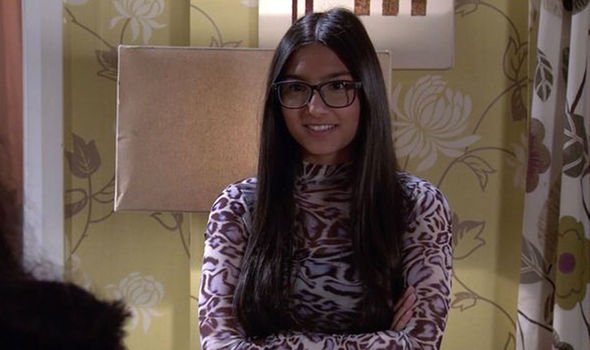 “That’s boys for you, from what I’ve heard,” Nina remarked, before putting a gift bag on the table for Asha to open.

The latter asked who it was for, to which the gothic character joked: “Oh, just a little something for Aadi.”

Seeing how the teenager wasn’t understanding her sense of humour, Roy’s niece then explained the present was for the schoolgirl.

Although it was just passing comment about the youngster’s twin brother, could it be Nina is set to fall in love with Aadi? 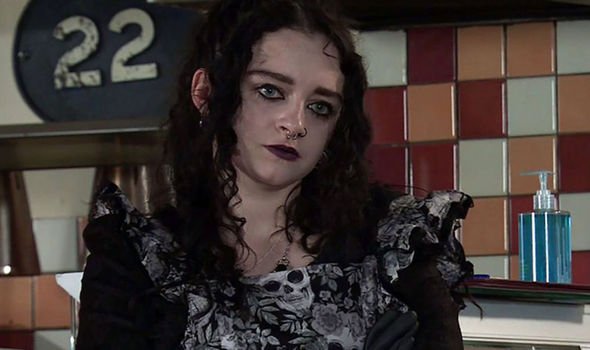 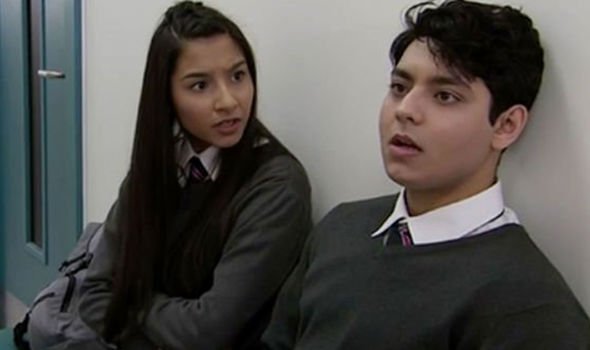 There’ll be a fantastic and unique love story

Referencing how she seems to make Dev “nervous” could also be an indication the youngster is going to spending a lot more time with the Alahans.

Discussing the new chapter for Nina, executive producer Iain MacLeod spoke to Express.co.uk and other publications about why this romance won’t be plain sailing.

The soap boss explained: “I think [Nina] and Mollie [Gallagher] are great and she is unlike any other character that I can think of on a soap.

“There’ll be a fantastic and unique love story for her that might not entirely end up where you might expect now.”

“I think if you were to pop down the bookies and put a bet on how you think her love story might play out, it probably won’t be like we’re going to do it and I hope it will be pleasantly surprising in the long run,” Iain continued.

“The love story will turn into a kind of massive social issue story that deals with things like the kind of tolerance of people that are part of minority communities and that they don’t look like everybody else and it’ll become a real talking point for next year.

“How does the world view people like Nina in reality? When they’re on Coronation Street, all our characters sort of take them under their wing and the viewers have taken her to their hearts. But in reality, in the real world if you don’t look like everybody else, sometimes that can be incredibly challenging.

“We’re going to explore that a little bit in the show to heartbreaking effect,” the soap boss added.

Iain teased of what’s to come: “It’ll turn into a story that kind of draws in Roy, and Abi [Franklin] and Kevin [Webster].

“It just, sort of, becomes this sort of huge, really emotive community story with some of our favourite actors in the middle of it.”

Aadi is another character who has often been pushed to the sidelines by his peers and his father as they have never had much faith in him.

Therefore, could he and Nina find themselves the talk of Weatherfield as they become one of the unlikeliest pairings in the soap’s history?