Elaine (played by Paula Wilcox) has been enjoying settling into life on Coronation Street in the last few months, having struck a friendship with Yasmeen (Shelley King) and building a relationship with her son, Tim Metcalfe (Joe Duttine). However, she is reminded on a daily basis what her evil ex-husband Geoff Metcalfe (Ian Bartholomew) put her and Yasmeen through, despite the positive changes which have been implemented in her life since he died last year. With the ITV soap villain still wreaking havoc from beyond the grave, Elaine believed it was time for her to move on in the latest double-bill of the Weatherfield-based drama.

It was explained to Elaine during the episodes that her son Tim had inherited everything from his late father’s will.

This meant he owned half of Number Six, a quarter of the Speed Daal business and any other assets the villain had left.

Tim told his mother he was going to seek legal advice from Adam Barlow (Sam Robertson) to ensure everything was put into Yasmeen’s name.

Unfortunately, this information wasn’t conveyed accurately to Alya Nazir (Sair Khan) when Elaine told her what was happening.

During this same conversation, Tim’s mother hinted that maybe it was time for her to move on and start afresh elsewhere. 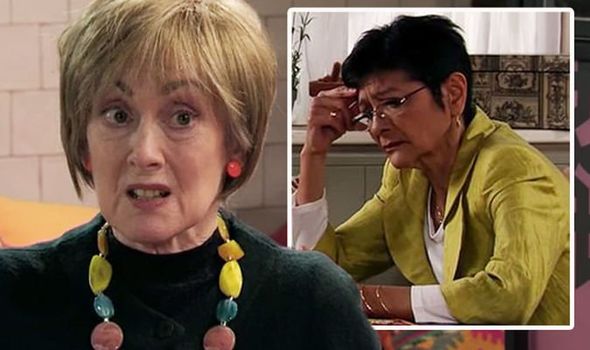 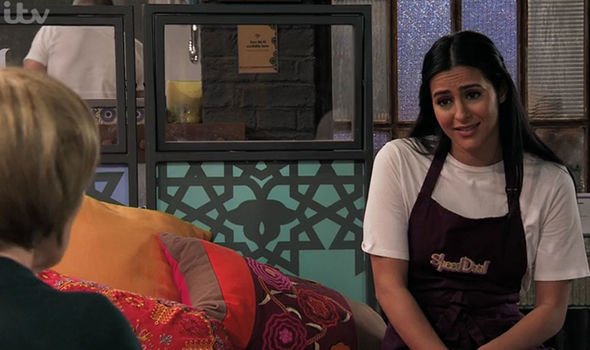 Sat in the Speed Daal restaurant, Elaine said to Alya: “I thought Yasmeen was working this afternoon?”

“She did a couple of hours work but then she got a call from another company chasing money and it upset her so she’s gone home for a rest,” Yasmeen’s granddaughter replied.

Teasing her exit, Tim’s mother explained: “I was thinking I might move on soon. It seems to upset Yasmeen me working here.”

“Are you saying this because she got annoyed at you?” Alya asked, adding her grandmother “gets angry at everyone.”

“Well, I’m in the way and when she hears the latest about Geoff, she is going to hate me,” Elaine remarked. 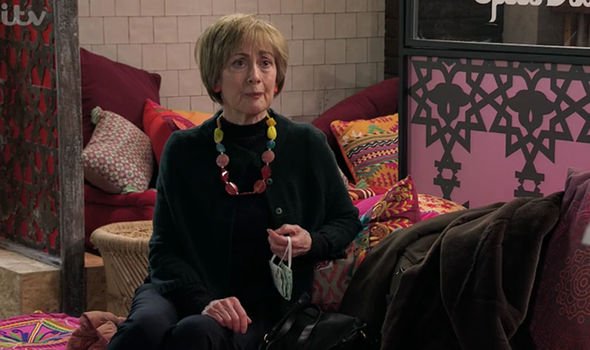 Geoff’s ex-wife then went on to explain Tim’s predicament over the will, news Alya wasn’t too pleased to hear.

She soon caused a scene as she threw the rest of the villain’s belongings at the Metcalfes’ front door as she wanted nothing more to do with the situation.

By the time the double-bill had come to an end, Tim had calmed Alya down and told Yasmeen she was going to be entitled to everything he had been left.

More than ever, Elaine seemed to be an outsider as her son wanted only the best for his step-mother following Geoff’s death. 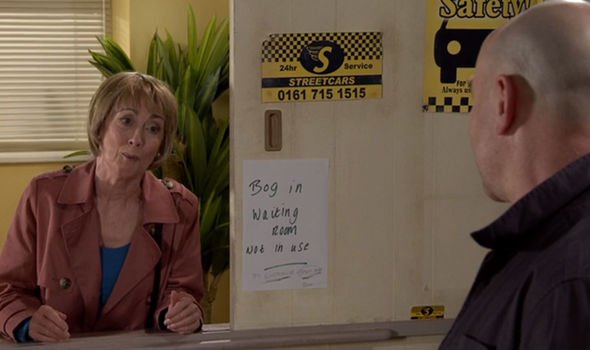 It has not been confirmed whether or not Elaine will be sticking around after she was first introduced to the soap last year.

Following Geoff’s death, it was assumed she was going to be staying on the cobbles to try and have a relationship with the son she had to walk away from when he was a toddler.

Tim has welcomed Elaine into the family fold with open arms but seeing his kind-hearted relationship with Yasmeen could make the mother-of-one realise he is in good hands.

Needing to move on from her past, Elaine could pursue other dreams she hasn’t be able to achieve because of Geoff’s overshadowing presence in her life.

Speaking last year about her character’s backstory, the actress who plays Elaine, Paula, explained: “She had to save herself.

“I think she did feel she was in mortal danger, so she got out.

“I suspect that for about 20 years or whatever, she buried it, tried not to think about it and tried to make a new life.”

Paula continued: “Then I suspect that gradually in time, these things have to be dealt with.

“I think Elaine is quite strong. To all intents and purposes, she’s made a very good recovery, outwardly. Nonetheless, those scars are still there,” she told the press, including Express.co.uk.

Elaine will never be able to forget her past but knowing Tim is happy with his life and is helping Yasmeen could give her the kick she needs to put herself first.

Will viewers be bidding a heartbreaking farewell to the matriarch of the Metcalfe family very soon?