BBC Breakfast hosts Dan Walker and Louise Minchin were back for their final instalment of the week before Naga Munchetty and Charlie Stayt take over tomorrow morning. As ever, the pair provided BBC viewers with extensive information and discussion of some of the biggest stories of the day but one of the topics which kept arising on Thursday morning was the issue of when it was acceptable to put up Christmas decorations. When Louise quizzed Carol Kirkwood on the hotly debated topic, she was left “disappointed” after it became clear the pair didn’t agree on things.

Carol finished off her routine weather update, telling viewers temperatures would “start to climb” throughout the weekend.

After handing back to her co-stars, Louise said: “Thank you so much, Carol, have you put up any Christmas decorations yet?”

Louise had earlier explained how excited she was for Christmas and was already well in the festive spirit.

And the presenter was left less impressed by what Carol had to say as it became clear she didn’t agree. 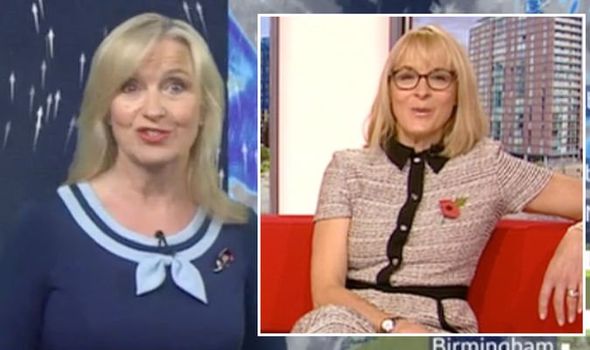 Carol’s clash of opinion became clear as she replied: “No. I can understand why everybody wants to but I am a firm believer in keeping Christmas in December!”

“Ah, come on Carol!” Dan said, but Louise wasn’t so pleased, adding: “Carol, for once you’ve disappointed me.”

Pleased by Carol’s comments, Dan joked: “We should form a new political party, you and me.”

“It’s you two against me and Nina [Warhurst], at the moment,” quipped Louise.