Britain’s Got Talent fans were treated to another set of auditions this evening as the hit ITV competition show continues. Judges Simon Cowell, 60, Amanda Holden, 49, Alesha Dixon, 41, and David Walliams, 48, were on hand to oversee the performances and decided which contestants would be going through to the next round. One of the first acts to take to the stage this evening was 14-year-old magician Jasper Cherry who wanted to provide something different to just the same old card trick. However, some viewers watching at home were left rather unimpressed as they believed they still “rumbled” the trick. 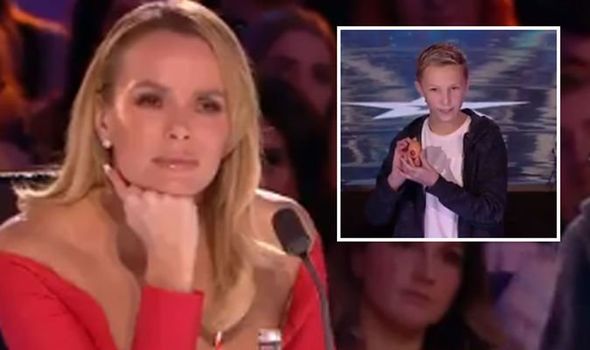 Jasper used an uncracked egg to make a series of handkerchiefs appear from a hole which seemed to have been carved into the shell.

After blowing the panel’s mind, the youngster had one last trick up his sleeve as he removed the opening from what seemed to be the same egg, making it seem it had been a sticker.

To prove this was the real deal, the contestant then cracked the egg into a glass with the white and yolk clearly visible.

The trick earned him a standing ovation from the audience but some viewers weren’t convinced as they took to social media to comment on how they thought the act had been performed.

One unimpressed fan wrote on Twitter: “Clearly saw the 14 year old swap the eggs around #BGT.”

Another commented on the micro-blogging site: “You can see he very clearly swapped the eggs. Not impressive.”