The former model knows the Trumps after appearing on Donald Trump’s reality show Celebrity Apprentice in 2015. However, Brandi is not a Trump supporter.

Brandi and her producer Ryan were discussing doing a skit-comedy show for Amazon and were thinking about who could be the first guest for the pilot when she mentioned tweeting the numbers.

“Easy,” laughed Ryan. He joked about having famous contacts like Barack Obama.

“I have uh, all of the Trumps’ phone numbers, I’m just sayin. Ivanka….,” she trailed off.

“That would be a great interview,” said Ryan.

“I should just tweet those numbers out,” Brandi continued. “I won’t do that. I’m not mean.”

“We should definitely get one of them to be interviewed for the show,” Ryan said.

“Let’s get Melania,” he added.

“Melania? She went back to Putin. She poisoned Trump,” she joked.

“That’s why it would be a great interview,” he replied.

Then she imitated Melania Trump having a hypothetical discussion with Vladimir Putin.

After she imitated Melania asking Putin if she had to stay with Trump, she imitated Putin’s accent and replied, “No. Poison him. Come home.”

Brandi has a crush

The podcast host also said that she had a crush on a female assistant working for Andy Cohen on Watch What Happens Live.

Brandi said that her crush was on a “girl” named Daryn [Carp]. She also said that she was going to be a guest on Daryn’s podcast called Scissoring Isn’t a Thing on December 4. 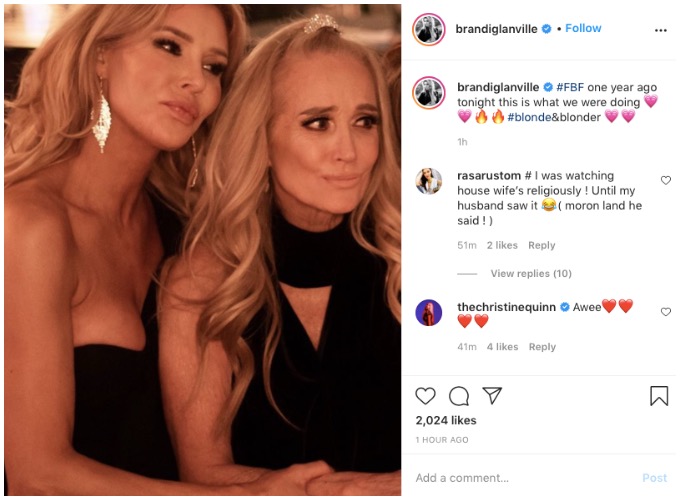 Brandi captioned the post, “#FBF one year ago tonight this is what we were doing 💗.”

Zack Peter said an insider confirmed on his podcast #NoFilter With Zack Peter that Brandi had sex with Kim.

The Real Housewives of Beverly Hills is currently on hiatus at Bravo.